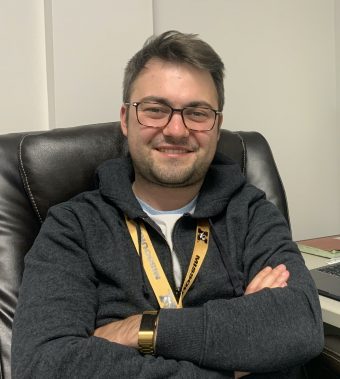 Constantine Simintiras and his colleagues in Thomas Spencer’s lab have found a non-invasive way to study fluid produced in the uterus during pregnancy.

The quest to create safer, more successful pregnancies is one of the top goals of modern science. While pregnancy is better understood today than ever before, with improvements in technology helping to lower the risk of negative outcomes, there is much researchers still don’t know about a vital part of the pregnancy process: uterine fluid.

Secreted by glands in the uterus during pregnancy, uterine fluid is believed to play an important role in supporting a developing embryo by sending information from the uterus to the embryo, along with a host of other speculated functions. But studying this fluid in women presents myriad dilemmas, given that studies might require invasive monitoring or experimentation during an active pregnancy.

Now, in a new study published in the Proceedings of the National Academy of Sciences (PNAS), researchers at the University of Missouri have found a way to study uterine fluid in the lab, thereby avoiding invasive procedures during pregnancy, while at the same time developing a potential model for using precision medicine to improve pregnancy outcomes.

“Using stem cell-derived organoids, we were able to isolate an analogue to uterine fluid in the lab,” said Constantine Simintiras, a postdoctoral research fellow in the College of Agriculture, Food and Natural Resources Division of Animal Sciences. “For such an understudied element of human pregnancy, being able to grow and study this fluid in the lab makes it much easier to advance our understanding of this important function of the uterus.”

Working in National Academy of Sciences member Thomas Spencer’s lab, Simintiras and his colleagues used “organoids” — simplified versions of the tissue that forms the lining of the uterus, grown from stem cells — as the source for a fluid that closely resembles uterine fluid. Inside the body, uterine glands secrete this fluid to support sperm migration and the early development of embryos.

Using organoids as a model not only sidesteps potential issues with extracting samples during pregnancy, but it also paves the way for a precision medicine approach to maintaining a healthy pregnancy. The hope is that by obtaining stem cells from expectant mothers, even before they conceive, researchers could study the composition of their uterine fluid to determine if any issues are present. For example, a deficit in NAD+ — a “coenzyme” considered crucial for metabolism — has been linked to birth defects and miscarriage.

“We know the composition of uterine fluid is extremely important, so we need to understand how that composition is regulated,” Simintiras said. “In women it is likely influenced by hormones, but are there other factors at play? This model for lab study gives us a means to tackle such questions, and in the future, this could help us detect and correct problems with uterine fluid before they lead to complications.”