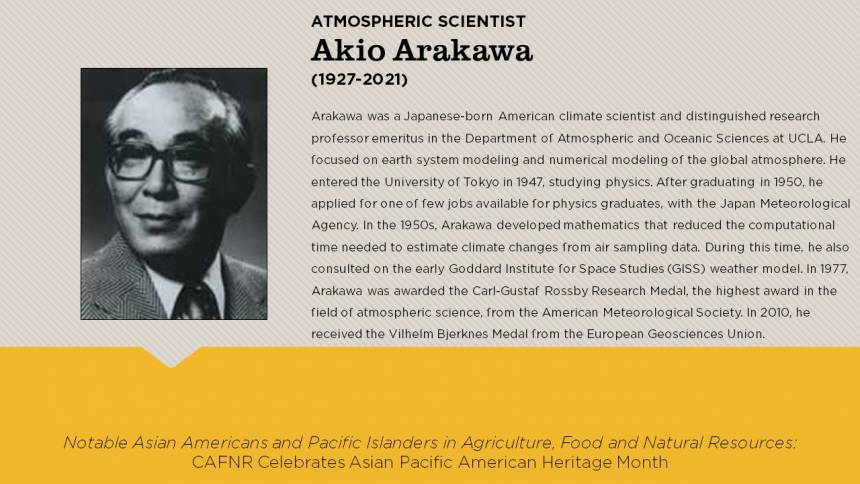 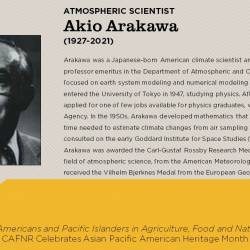 Akio Arakawa (1927-2021). Arakawa was a Japanese-born American climate scientist and distinguished research professor emeritus in the Department of Atmospheric and Oceanic Sciences at UCLA. He focused on earth system modeling and numerical modeling of the global atmosphere. He entered the University of Tokyo in 1947, studying physics. After graduating in 1950, he applied for one of few jobs available for physics graduates, with the Japan Meteorological Agency. In the 1950s, Arakawa developed mathematics that reduced the computational time needed to estimate climate changes from air sampling data. During this time, he also consulted on the early Goddard Institute for Space Studies (GISS) weather model. In 1977, Arakawa was awarded the Carl-Gustaf Rossby Research Medal, the highest award in the field of atmospheric science, from the American Meteorological Society. In 2010, he received the Vilhelm Bjerknes Medal from the European Geosciences Union. 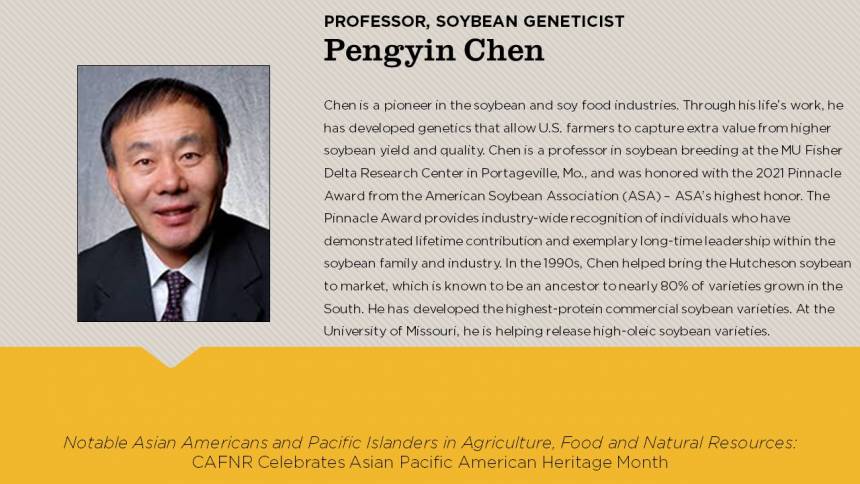 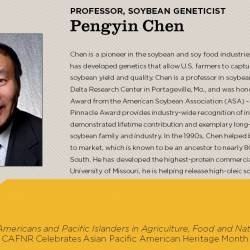 Pengyin Chen. Chen is a pioneer in the soybean and soy food industries. Through his life’s work, he has developed genetics that allow U.S. farmers to capture extra value from higher soybean yield and quality. Chen is a professor in soybean breeding at the MU Fisher Delta Research Center in Portageville, Mo., and was honored with the 2021 Pinnacle Award from the American Soybean Association (ASA) – ASA’s highest honor. The Pinnacle Award provides industry-wide recognition of individuals who have demonstrated lifetime contribution and exemplary long-time leadership within the soybean family and industry. In the 1990s, Chen helped bring the Hutcheson soybean to market, which is known to be an ancestor to nearly 80% of varieties grown in the South. He has developed the highest-protein commercial soybean varieties. At the University of Missouri, he is helping release high-oleic soybean varieties. 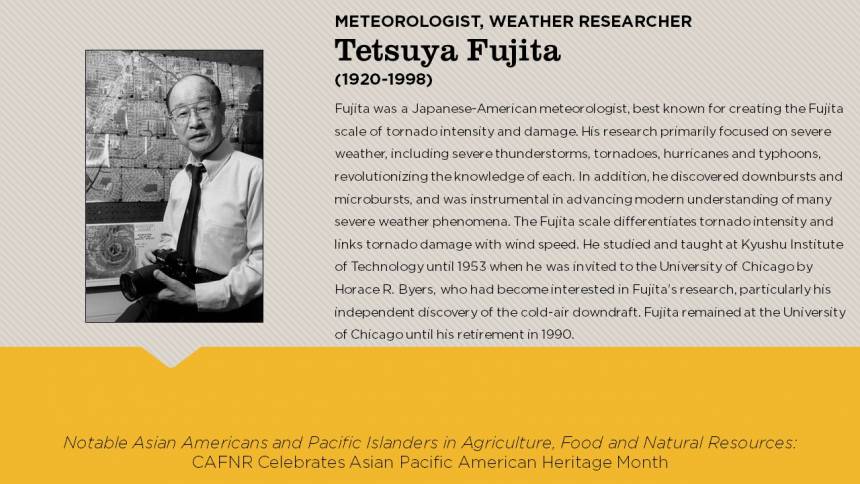 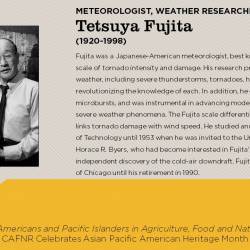 Tetsuya Fujita (1920-1998). Fujita was a Japanese-American meteorologist, best known for creating the Fujita scale of tornado intensity and damage. His research primarily focused on severe weather, including severe thunderstorms, tornadoes, hurricanes and typhoons, revolutionizing the knowledge of each. In addition, he discovered downbursts and microbursts, and was instrumental in advancing modern understanding of many severe weather phenomena. The Fujita scale differentiates tornado intensity and links tornado damage with wind speed. He studied and taught at Kyushu Institute of Technology until 1953 when he was invited to the University of Chicago by Horace R. Byers, who had become interested in Fujita's research, particularly his independent discovery of the cold-air downdraft. Fujita remained at the University of Chicago until his retirement in 1990. 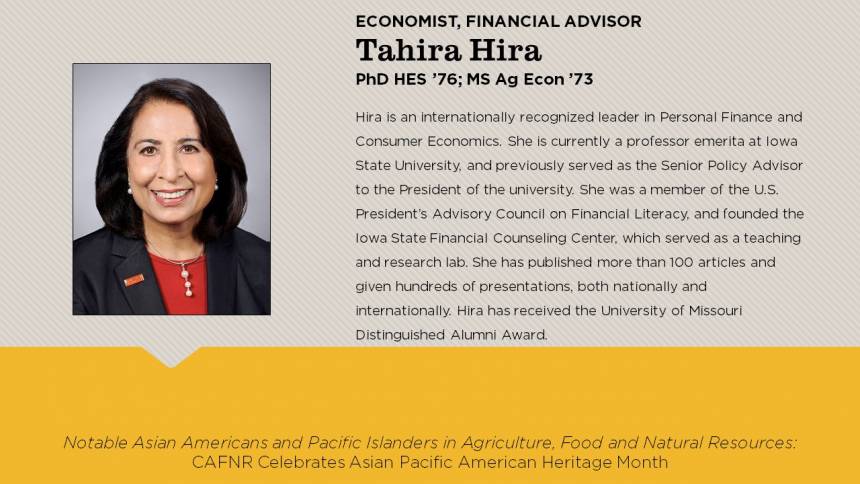 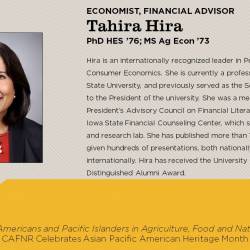 Tahira Hira, PhD HES ’76; MS Ag Econ ’73. Hira is an internationally recognized leader in Personal Finance and Consumer Economics. She is currently a professor emerita at Iowa State University, and previously served as the Senior Policy Advisor to the President of the university. She was a member of the U.S. President’s Advisory Council on Financial Literacy, and founded the Iowa State Financial Counseling Center, which served as a teaching and research lab. She has published more than 100 articles and given hundreds of presentations, both nationally and internationally. Hira has received the University of Missouri Distinguished Alumni Award. 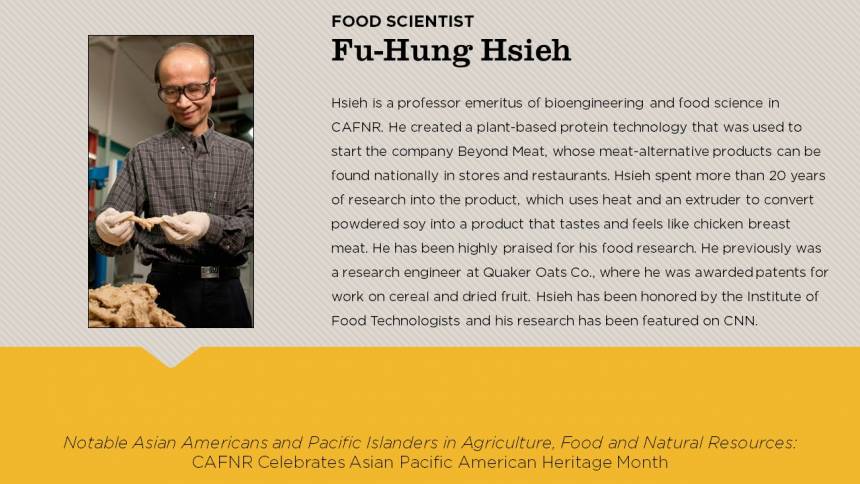 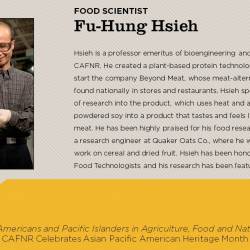 Fu-Hung Hsieh. Hsieh is a professor emeritus of bioengineering and food science in CAFNR. He created a plant-based protein technology that was used to start the company Beyond Meat, whose meat-alternative products can be found nationally in stores and restaurants. Hsieh spent more than 20 years of research into the product, which uses heat and an extruder to convert powdered soy into a product that tastes and feels like chicken breast meat. He has been highly praised for his food research. He previously was a research engineer at Quaker Oats Co., where he was awarded patents for work on cereal and dried fruit. Hsieh has been honored by the Institute of Food Technologists and his research has been featured on CNN. 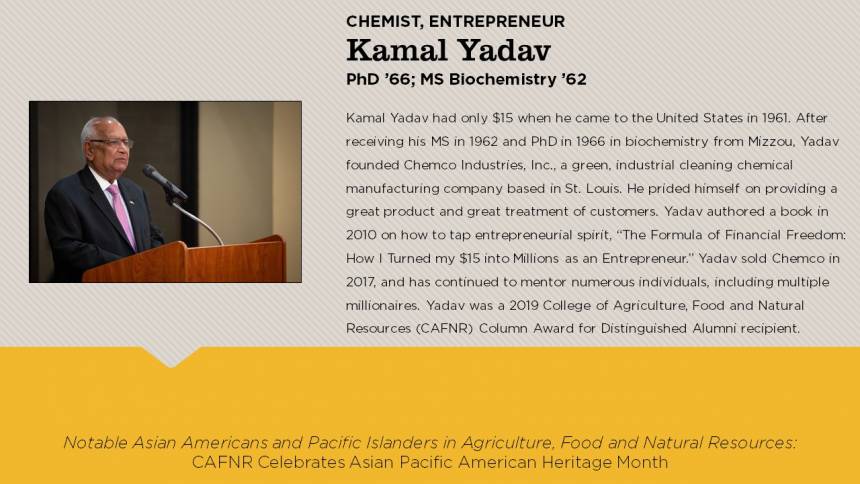 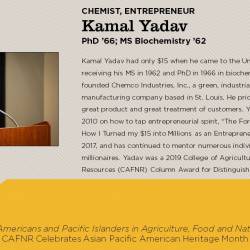 Kamal Yadav PhD ’66; MS Biochemistry ’62. Kamal Yadav had only $15 when he came to the United States in 1961. After receiving his MS in 1962 and PhD in 1966 in biochemistry from Mizzou, Yadav founded Chemco Industries, Inc., a green, industrial cleaning chemical manufacturing company based in St. Louis. He prided himself on providing a great product and great treatment of customers. Yadav authored a book in 2010 on how to tap entrepreneurial spirit, “The Formula of Financial Freedom: How I Turned my $15 into Millions as an Entrepreneur.” Yadav sold Chemco in 2017, and has continued to mentor numerous individuals, including multiple millionaires. Yadav was a 2019 College of Agriculture, Food and Natural Resources (CAFNR) Column Award for Distinguished Alumni recipient.