Bill Lamberson asked me to think back over my years at Mizzou as I transition from “active faculty” to “retiree” status, and share thoughts as to what motivated my efforts during my years in academia. My interest in animal agriculture began with experiences I had growing up on a diversified farming and ranching operation in south central Montana and through my participation in 4-H and FFA. Although my parents supported my education beginning at a young age, my eventual decision to pursue graduate degrees was not made easily; graduate school meant leaving family, the family ranch, Beartooth Mountains, and Montana. Undergraduate courses in reproductive physiology, genetics and animal breeding motivated my interests in these disciplines and framed a way that I envisioned being able to remain connected to animal agriculture and people that derive livings from it.

Using what I learned in the classroom, by applying the science of reproductive physiology to accelerate genetic improvement in beef cattle, was a place I felt I could contribute and perhaps make a difference. My B.S. and M.S. degrees were completed at Montana State University, with research for my M.S. degree conducted at the USDA Livestock and Range Research Laboratory in Miles City, MT. I benefited from experiences at West Virginia and Northwestern Universities, prior to completion of a Ph.D. from Kansas State University. Before joining the faculty in the Division of Animal Sciences at the University of Missouri in 1996, I served as State Extension Beef Specialist in Reproductive Physiology at the University of Kentucky in Lexington. During my graduate training I benefited not only from mentoring I received from Bob Bellows, Pete Burfening, and Larry Corah, but perhaps as much from what I learned conducting research in the environments and production settings I was placed in that broadened my interest in beef cattle reproductive management. Over time I came to view the field as my laboratory, and I valued having the opportunity to work with experiment station herds, farms and ranches in numerous states across the U.S.

In addition to my graduate mentors, I benefited from and am grateful to academics and industry professionals that contributed to my training and shaped my appreciation for the importance of application. These included reproductive physiologists Bob Short, Bob Staigmiller, Ed Moody, Keith Inskeep, Neena Schwartz, and Guy Kiracofe; geneticists Don Kress and Ray Woodward; and DVMs Jack Catlin and Mark Spire. During my graduate training I was fortunate in being able to work with Jim Lauderdale, John Chenault, and Roy Wallace from industry, each of whom were mentors and important collaborators over the course of my career.

As a faculty member at a land-grant university, I subscribed to a philosophy that my professional responsibility was to generate and disseminate new knowledge. My split appointment in Extension and Research at MU was a good fit to support my professional goals, being able to contribute to research programs in reproductive physiology and translating outcomes from applied research through Extension that offered tangible benefits to the beef industry of Missouri.

Thinking back over the years at MU from when I joined the faculty in 1996, I owe thanks for the support I received to Mike Smith, Allen Garverick, Matt Lucy, Duane Keisler, William Herring, Jerry Taylor, Bill Lamberson and Jared Decker in Animal Sciences; Scott Brown and Joe Parcell in Agriculture Economics; DVMs Richard Randle, Scott Poock, and Cliff Murphy; Eldon Cole, Al Kennett, Roger Eakins and our entire Extension Livestock field staff; and journalist, Duane Dailey. Support staff including Judy Burton, LaWanna Randle, Lena Johnson, and Becki Schnell worked behind the scenes to support our efforts on campus and in the field. As I think back over these years, I was fortunate to enjoy collaborations with and support from these and other individuals too numerous to name. The importance of these collaborations cannot be overstated when considering our efforts to link teaching, research and Extension into an overarching program tied back to the discipline of reproduction.

My primary appointment in Extension centered around development of a program focused on key problem areas in the reproduction cycle of the beef female. The two production phases that comprise this cycle involve developing replacement heifers and rebreeding lactating cows. Puberty in heifers and resumption of estrous cycles by cows after calving are the two physiological events that allow repetition of the cycle to occur; so, when we identify management practices that limit the efficiency of this cycle and couple that understanding with strategies to optimize its’ efficiency, we should impact profitability. Given the significance of beef cattle to Missouri’s agricultural economy, with roughly 2 million beef cows in production, improvements in reproduction matter, and the cycle all begins with heifers.

With these considerations in mind, our goal was to implement a program with statewide impact centered around a working plan with measurable reproductive, genetic, management, and economic outcomes. The first step in the plan was to create an understanding of the importance of heifer development based on reproductive end points and that once this understanding takes hold, changes in heifer development would begin spilling over into the cow herd; the focus could then expand to genetic improvement. These steps eventually led to the creation of a value-added product and necessitate re-evaluation of strategies to market cattle more effectively to capture the added value that results. The cumulative outcome would be realized as participants begin building equity in their herds after repetition of the plan over time. Each of these steps are logical and on paper seem simple to implement, but organizing a coordinated effort involving beef producers, Extension field staff, veterinarians, allied industry, and livestock markets across Missouri required significant investments of time, labor, human capital, and funding. No other state or university was in a position or as well-equipped as Missouri and MU to consider such an undertaking. The support of system level and CAFNR administration, namely Murry Hardesty and Dave Baker guided an effort to secure financial support for the program through the “Outreach Development Fund (ODF)”. Once the source of funding was secured, implementing our plan, and tracking its impact were the next steps. 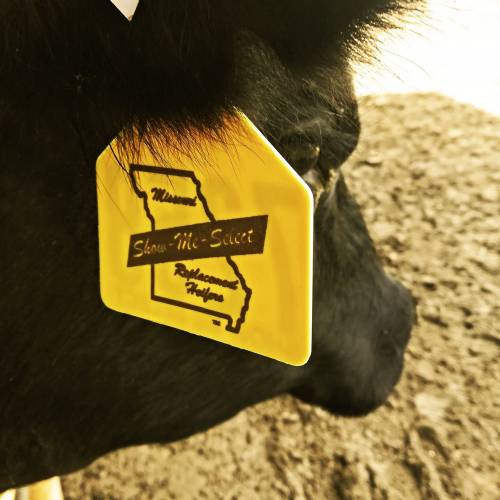 The Missouri Show-Me-Select® Replacement Heifer Program resulted from these efforts and over time came to be known to as the “Midwest’s Source of Replacement Beef Heifers.” Since its inception in the Fall of 1996, nearly 1,000 farms enrolled over 150,000 heifers in the Show-Me-Select® program. The program created an educational conduit for beef producers across Missouri, expanding the adoption of reproductive and genetic technologies in the field and enabling participants to gauge the added value they create through a branded state-wide marketing program that’s now sold heifers into 20 states. Economic impact resulting from the program is significant and on-going as more producers implement the “plan” in their herds.

Upon my arrival at MU, Mike Smith and I began an effort to support students interested in reproductive management through an internship supported by the F.B. Miller Fund and Select Sires, Inc. Together, we deemed it essential for students to gain hands-on experience in applied reproductive technologies after developing an educational foundation in the classroom. The internship filled an important niche in supporting a well-rounded education among our students, enabling the development of skills students put to use pursuing careers in production agriculture, graduate degrees, or veterinary medicine. Beginning with the first class of interns in 1997, over 250 students participated in the internship gaining hands-on experience in reproductive management procedures. These students were involved in breeding programs with over 300,000 heifers and cows on farms and ranches in 12 states. Participation in the internship fostered a greater appreciation of beef cattle reproductive management, created links for students with allied industries, and expanded career opportunities following graduation.

Finally, my research program focused on ways to accelerate genetic improvement of beef cattle through increased use of artificial insemination. Our goal aimed to develop practical methods of estrous cycle control that would ultimately facilitate fixed-time artificial insemination (FTAI), in other words breeding cattle by appointment. Our ability to conduct hypothesis driven research required access to enough cows and heifers at a single location to test hypotheses before transferring new strategies to the field. The University of Missouri Thompson Research Center at Spickard accommodated this need, and was supported by farm managers, David McAtee and Jon Schreffler. Our research at Thompson demonstrated what can be accomplished using reproductive technology in combination with defined breeding objectives to accelerate genetic improvement and add value, which in this case focused on white table cloth beef. Over the years research we conducted at Thompson led to new strategies to synchronize estrous cycles of beef cows and heifers in breeding programs involved with natural service, artificial insemination, and embryo transfer. Several protocols designed to facilitate FTAI resulted from our research, along with new strategies that optimize timed AI pregnancy rates using a split-time AI approach with conventional or sex sorted semen.

Funding from USDA’s National Institute of Food and Agriculture (NIFA) supported our research, and integrated project awards we received from NIFA contributed to translating outcomes from our research to the industry. A major undertaking from one of the NIFA funded integrated awards we received was transferring the concept of fixed-time AI to the field. Seventy-three herds in Missouri with over 7,000 cows were involved in this effort, demonstrating that FTAI could be performed successfully on farms and ranches across the state; an effort that changed the mindset of producers and increased the adoption of this important biotechnology. As interest in FTAI grew, University of Missouri Extension responded by equipping regions across the state with portable AI breeding barns, creating a multiplier effect in the number of operations that benefitted from its adoption.

Seven of these students were dual enrolled in the DVM-MS program; each with an interest in developing an understanding of the scientific method while at the same time gaining experience in an array of reproductive technologies. As value-added programs like the Show-Me-Select® program gain strides into the beef industry, prebreeding evaluation of heifers including reproductive tract scoring and pelvic exams, fetal aging and sexing become more common and, in many cases, routine. In addition, some practitioners offer expanded services that include estrous synchronization and artificial insemination. The dual program enables students to develop many of these skills placing them at a competitive advantage as they begin food animal practice upon completion of their M.S. and Veterinary degrees. Carolyn Henry, John Dodam, and Scott Poock helped to secure funding for the dual program from Mizzou Advantage and the College of Veterinary Medicine, supporting goals related to “Food for the Future” and “One Health One Medicine”.

I say without hesitation that I was privileged serving the citizens of Missouri in support of the land-grant mission, a responsibility I took seriously. I enjoyed the challenge of envisioning an outcome using the scientific method to test hypotheses, interpret results, and transfer technology to the field. Expanding the knowledge base of our stakeholders is a way the University makes a difference in rural communities. On-going interaction with stakeholders is critical in providing necessary feedback to campus-based faculty regarding challenges the industry faces and whether programs initiated from the university make a difference in people’s lives. We were fortunate in being able to support our initiatives with funding from ODF and NIFA, as these competitive sources of funding provided the necessary resource we relied on to accomplish our Extension and research goals.

Finally, in reading back over this text the importance of mentors, collaboration, and teamwork stands out. Few of the outcomes during my tenure at Mizzou would have been realized without the support of the individuals I’ve named, but as importantly, my wife, Mary Palffy, and sons Dolan and Ian. Programs develop, prosper, or fail based on the determination and efforts of the individuals and team(s) involved. Those teams are what made these programs ones we take pride in, and what made going to work each day not only a challenge, but fun.