A background in agriculture, a degree in animal sciences… Expand ▸

A background in agriculture, a degree in animal sciences from the University of Missouri and an entrepreneurial passion helped Elaine Martin launch Blue Cedar Beef in 2019. Martin and her husband, Brendan, saw a problem in their local community – and came up with a solution.

“We had been selling halves and whole beeves to family, neighbors and friends for several years but kept getting requests for smaller quantities of beef,” Elaine said. “I combined that idea with the fact that you can get nearly anything today shipped to your doorstep. Why not get quality beef shipped to your doorstep as well? We launched Blue Cedar Beef as an online direct-to-consumer beef business where anyone across the United States can go online, order the exact cuts and quantity of beef that they want, and get it shipped to their doorstep.” 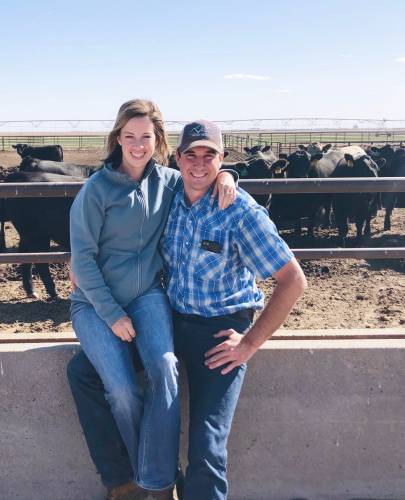 Blue Cedar Beef is a family owned and operated farm, where the Martins raise black Angus cattle. The Martins select genetics for cattle that are docile, grow quickly and provide either Choice or Prime beef on the quality grade scale. Their operation is located in the heart of the Shenandoah Valley of Virginia, in the northern part of the state.

“Operating Blue Cedar Beef is definitely a rewarding job,” Elaine said. “I have a huge passion for promoting agriculture and educating the public on where and how their food is grown, so this business fits in perfectly. Almost every day, I get to talk to a consumer about raising beef cattle and answer any questions they may have. I’m also a huge advocate of what would be considered commercial agriculture. We raise beef cattle and send several loads of cattle to feed every year, so I think that gives me a unique vantage point when talking to consumers. I’m all for supporting small, local farmers and I’m also all for large-scale animal production. If I can bridge the gap for even one consumer that how I raise my cattle at home with great animal husbandry and care is the exact same way that cattle are raised on a large operation and in a feedlot, I call that a win for the entire industry of agriculture.”

Elaine and Brendan met in Kansas, as Elaine was working a full-time job at a large purebred Angus cattle operation right after graduating from MU in 2013. Elaine interned at the same cattle operation as a student in the MU College of Agriculture, Food and Natural Resources (CAFNR) before accepting the full-time gig.

“Taking an internship during college was easily one of the best learning experiences I had,” Elaine said. “Internships don’t replace classroom studies, but they do offer such a real-world hands-on experience that really complements the knowledge taught in a classroom. I am thankful that MU places such a large emphasis on taking internships and worked with me as I took an internship during a school semester versus the typical summer internship. I was able to take a few online classes as well as gain credit for taking the internship. That this internship turned into my first full-time job was so rewarding! I interned at a large purebred Angus operation and that sealed the deal on my love for Angus cattle and working in the beef industry.”

Elaine’s interest in agriculture began on her family’s beef cattle and row crop farm in Centralia, Mo. Being part of a family of Mizzou graduates led her 30 minutes south to Columbia, where she knew animal sciences was going to be the perfect degree program for her.

“As a kid, I was also very active in 4-H and FFA, as well as helping on the farm, so I knew that agriculture was the career path I wanted to pursue,” Elaine said. “I enjoyed animals, specifically beef cattle, more than the crops, so animal sciences seemed like a logical degree. I had two older brothers and many other family members attend the University of Missouri and knowing that it had a strong animal sciences department, there was no question of where I wanted to attend college.” 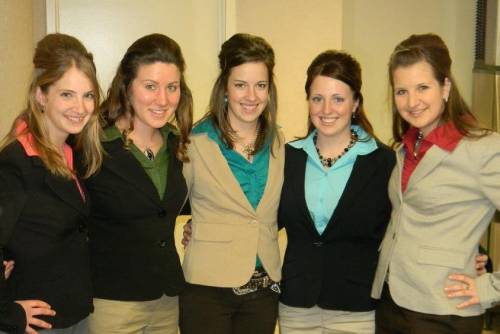 Elaine was incredibly active during her time at MU, including joining the livestock judging team. Her coach at the time was David “Chip” Kemp.

“One of the big highlights for me attending MU was being able to judge on the livestock judging team,” Elaine said. “I judged livestock throughout 4-H and FFA and really enjoyed both the competition and learning the skills of becoming a better cattleman. My livestock judging coach served as a mentor throughout my years at MU. He spent a lot of time investing in all of us on the team and we learned so much as we traveled across the country representing MU and judging livestock. Traveling to different parts of the United States and being able to step into other producer’s operations and see and learn how they raise livestock was really valuable.”

As Elaine transitioned from her full-time job to owning her own business, her time in the Division of Animal Sciences helped make the move a bit more manageable.

“I had so many great professors in the division that not only taught me the reproduction cycle of a cow or how to evaluate a carcass on the rail, but they also invested in me as an individual and guided me on a path toward a successful career,” she said. “My time at CAFNR prepared me for life after college in so many ways. I was challenged by coursework that taught me how to problem solve, seek help and find a solution to the problem. I was exposed to many different career paths and that helped me discover what paths I wanted to pursue further.”

Blue Cedar Beef ships cuts across the country and is active on both Facebook and Instagram. Blue Cedar Beef has been featured in various online rankings over the past year as well, showcasing the best meat delivery services around the country.

“Jumping from working for someone to owning and running your own business is a daily challenge,” Elaine said. “I guess you could say that both my husband and I have an entrepreneurial passion and that helps fuel our drive every day. We both grew up on family farms, so the dream has always been to have a farm of our own and we dove head first into the dream shortly after college.”