The day after Abigail Turner graduated from high school she jumped on an airplane and flew to Australia with the encouragement of her parents, who love to travel. Turner grew up in Brookfield, Mo., a town of less than 4,500 people, and the trip to Australia was her first foray into international travel. It wouldn’t be her last.

Turner, a senior studying agricultural education, has spent a good portion of her collegiate career at the University of Missouri traveling – through study abroad experiences and other opportunities. Those experiences have offered Turner the chance to gain valuable insights and broadened her view of the world.

“Each place I’ve visited offers me a new reality,” Turner said. “For me, my reality is a small-town kid who went to college. It’s pretty simple, honestly. Other countries have completely different cultures and norms. It’s been so incredible to see the world and gain new perspectives on life.” 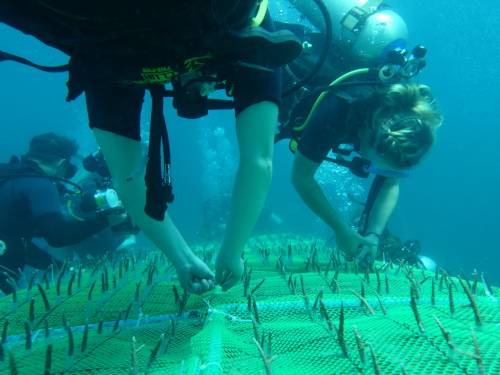 Turner had the opportunity to scuba dive and take snips or coral during a study abroad experience in Thailand. Photo courtesy of Abigail Turner.

Turner didn’t wait long to get her first study abroad experience under her belt as a student in the College of Agriculture, Food and Natural Resources (CAFNR). Turner joined the Ecole d’Ingénieurs de PURPAN’s Summer Study Abroad Program the summer after completing her freshman year. She completed the four-week on-campus component of the program, as well as an internship with a farming family in France.

“The trip to France was very focused on agriculture and very hands-on,” Turner said. “We took classes on culture and agriculture, with focuses on crop production and food processing in Europe. We also had the opportunity to visit numerous family farms. I’ve never visited so many farms in such a short amount of time. We were always on the move.”

“That family is so, so special to me,” Turner said. “And it wasn’t just the immediate family who were part of the farming operation. There were grandparents, aunts and uncles. Everyone was always around and happy to be together. It was such a pure environment.

“French agriculture was really interesting to learn about. Almost everywhere we went was prepared for agriculture tourism, which was really refreshing to see.”

While Turner was taking in everything her first study abroad experience had to offer, she was also readying herself for her next stop – Thailand. That program came during winter break of her sophomore year, just a few months after she would complete her time in France.

“I started learning the Thai language while I was in France,” Turner said. “I knew I wanted to be able to communicate with individuals who live there, even if it was at a very basic level.”

Turner’s Thailand experience was much different than her time in France, and not just from a cultural standpoint. The program was focused on much different type of projects. 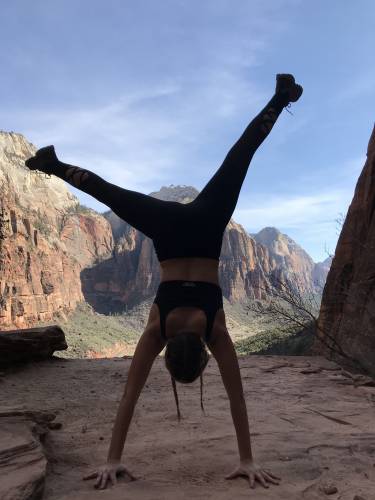 “Thailand was a lot of work, which I really appreciated,” Turner said. “We didn’t do as many farming tours. We did get to work with elephants and did projects related to their food preferences, which was really neat.

“We also got to scuba dive right off the coast between Thailand and Malaysia. Those dives were focused on finding healthy coral, taking snips of that coral and taking them to a nursery. This project has been going on for years and it’s all about creating healthy habitats for coral.”

Both study abroad experiences came at an opportune time for Turner. She said her freshman year was tough in many ways and study abroad helped give her a new outlook.

“I was very depressed my freshman year, and I really thought I was going to just drop out,” Turner said. “Honestly, study abroad helped bring me out of that. I’ve never felt so much joy and acceptance. I came back after that first trip happier. I had a newfound joy for life.”

Turner stayed stateside during her next two trips, the first to Utah and the next to Washington, D.C. Her trip to Utah was through Mizzou Alternative Breaks, where she and five other students shadowed a park ranger at Zion National Park. Her travel to Washington, D.C., was to work with a congressman.

“There was definitely a point where my mom was wondering if I was ever coming home,” Turner said.

Turner’s interest in agriculture began at an early age. Her parents owned a farm not too far from where she grew up, and she was also very involved in 4-H and FFA. Along with Turner’s parents’ love of travel, Turner got a taste for travel through FFA trips.

“FFA provided me so many great opportunities, and travel was definitely one of them,” Turner said. “I learned quickly that traveling was something that I drew energy from. I’m very extroverted, and I get energy from meeting people and being in new situations.”

Coming to the University of Missouri was an easy decision for Turner. She comes from a Mizzou family and has been wearing black and gold since she was a toddler.

“I didn’t even look at any other colleges,” Turner said. “I knew I was going to Mizzou. I’ve always loved MU.”

“Along with my undergraduate degree, I’m planning on getting my graduate degree here,” Turner said. “After that, I’m still looking at my options. I’m hoping to get involved with Global Teach Ag on their next trip or maybe do something like AgriCorps, which is like the Peace Corps only you’re developing agriculture programs.” 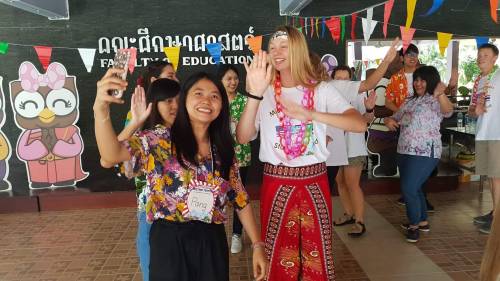 Turner had a trip planned with Global Teach Ag last year, but the COVID-19 pandemic put a halt to that. She was scheduled to travel to Nepal.

“I’m still a little salty about it, obviously,” Turner said. “I’m just hopeful there’s another opportunity for me to go in the next couple of years.

“I miss traveling every day. I’m not used to not going places, and if I could hop on a plane tomorrow I would. It’s been far too long without international travel.”

Turner encourages all students to participate in study abroad. She said that CAFNR has made the study abroad experience incredibly positive.

“I’m so thankful that CAFNR has encouraged me to go after these opportunities,” Turner said. “I would not have been able to have these experiences without CAFNR – they literally made it happen. I really feel like every student should take part in an international experience. There is somewhere for everyone, and experience is definitely the best teacher.

“Shanon (Dickerson) and Dr. (Bryan) Garton have been so great. The reason I haven’t been nervous to travel abroad is because I know they’re on my team. It’s so refreshing to know that they’re in my corner and always have my best interests at heart.”