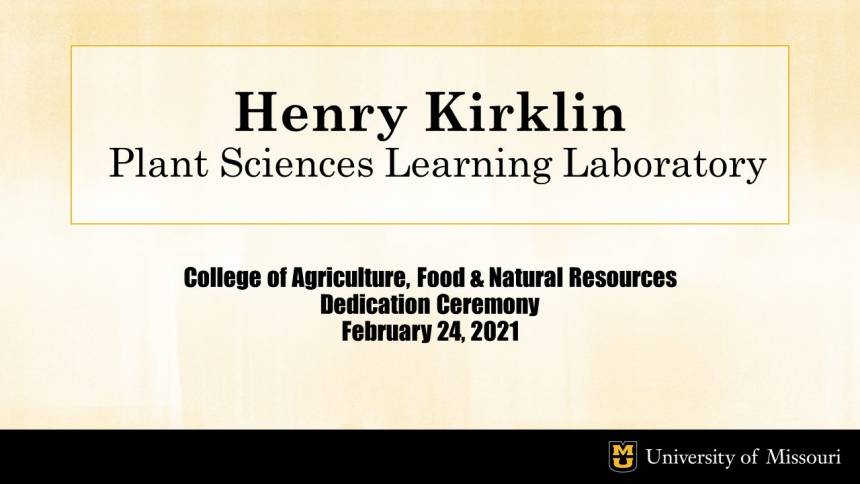 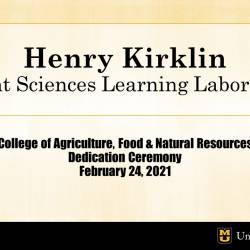 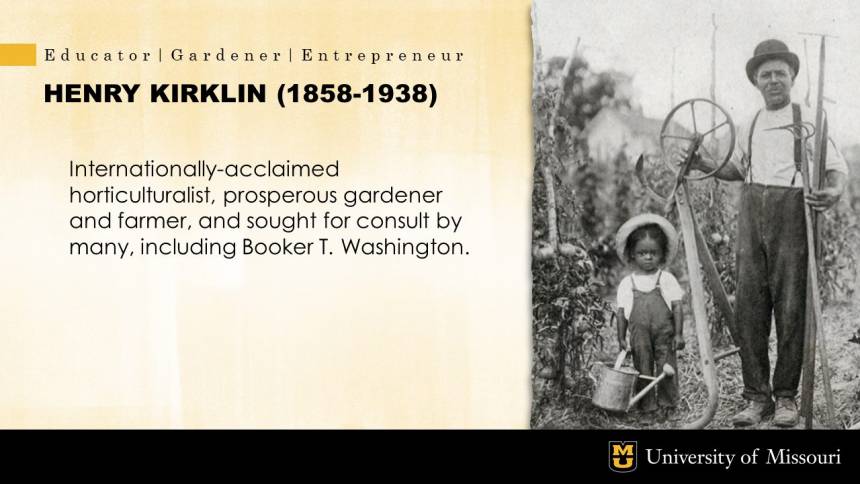 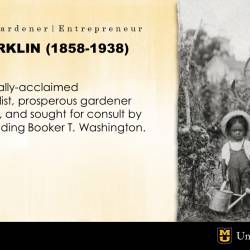 Henry Kirklin (1858-1938): Internationally-acclaimed horticulturalist, prosperous gardener and farmer, and sought for consult by many, including Booker T. Washington. 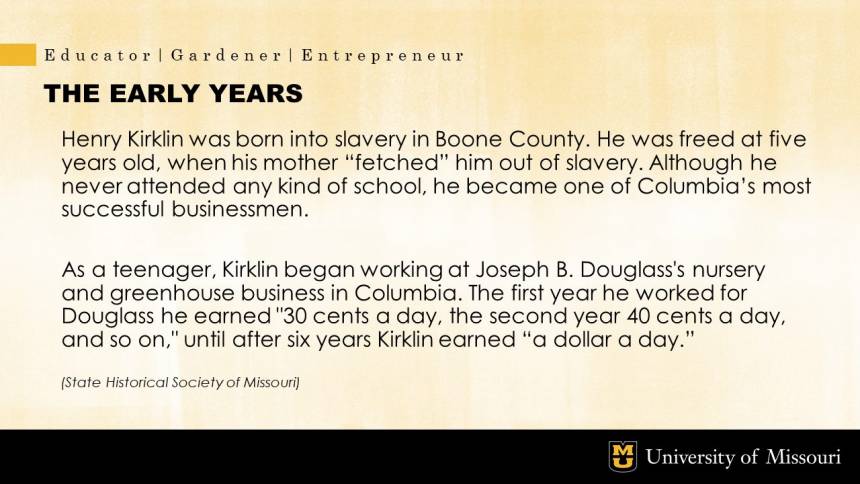 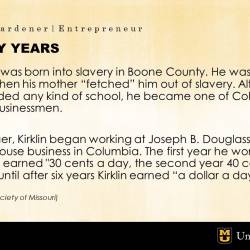 Henry Kirklin was born into slavery in Boone County. He was freed at five years old, when his mother “fetched” him out of slavery. Although he never attended any kind of school, he became one of Columbia’s most successful businessmen. As a teenager, Kirklin began working at Joseph B. Douglass's nursery and greenhouse business in Columbia. The first year he worked for Douglass he earned "30 cents a day, the second year 40 cents a day, and so on," until after six years Kirklin earned “a dollar a day.” (State Historical Society of Missouri) 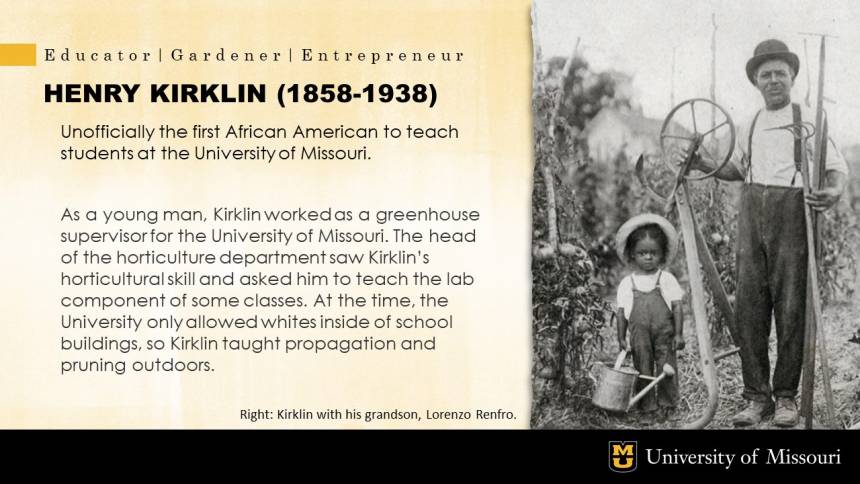 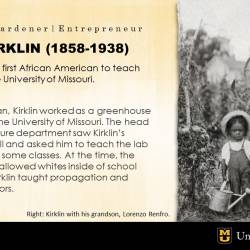 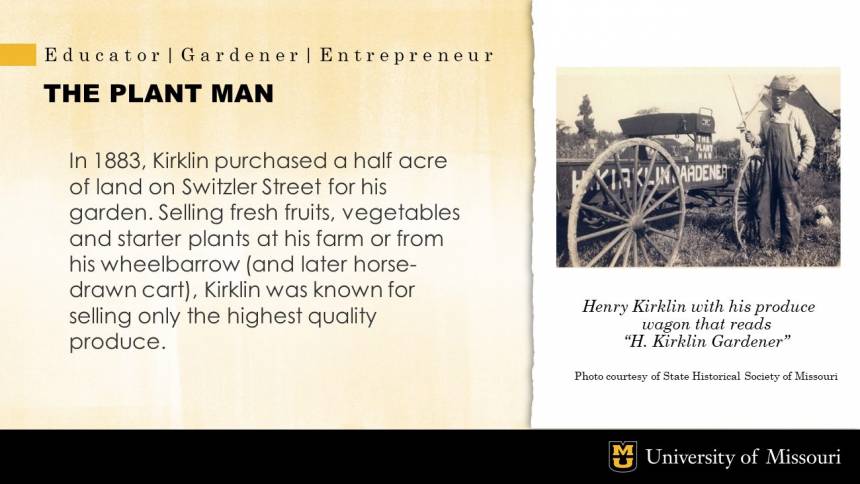 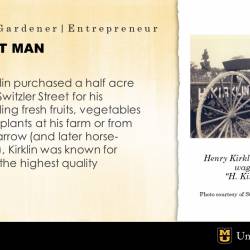 The Plant Man: In 1883, Kirklin purchased a half acre of land on Switzler Street for his garden. Selling fresh fruits, vegetables and starter plants at his farm or from his wheelbarrow (and later horse-drawn cart), Kirklin was known for selling only the highest quality produce. 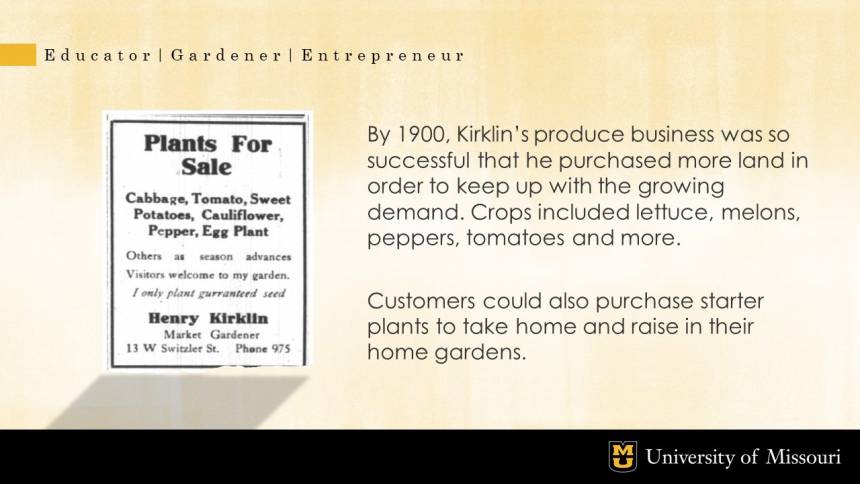 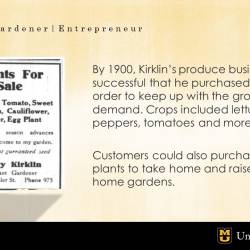 By 1900, Kirklin’s produce business was so successful that he purchased more land in order to keep up with the growing demand. Crops included lettuce, melons, peppers, tomatoes and more. Customers could also purchase starter plants to take home and raise in their home gardens. 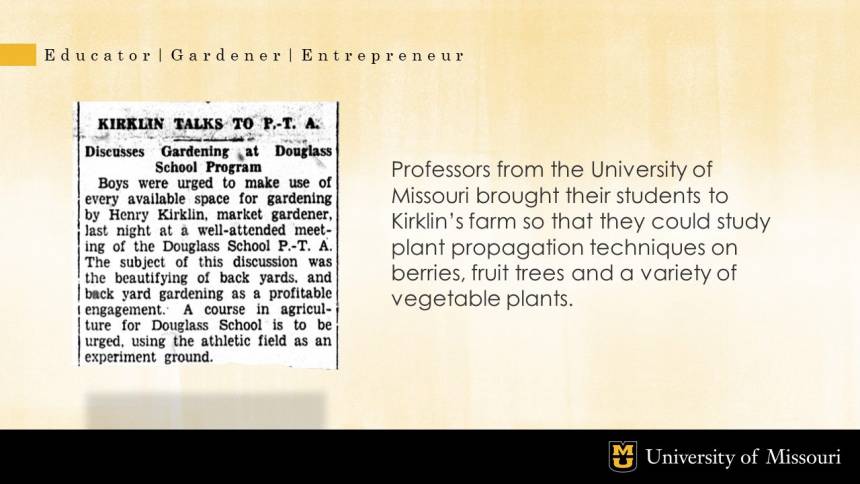 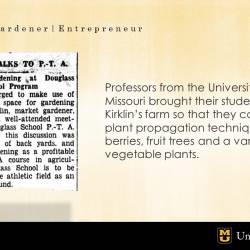 Professors from the University of Missouri brought their students to Kirklin’s farm so that they could study plant propagation techniques on berries, fruit trees and a variety of vegetable plants. 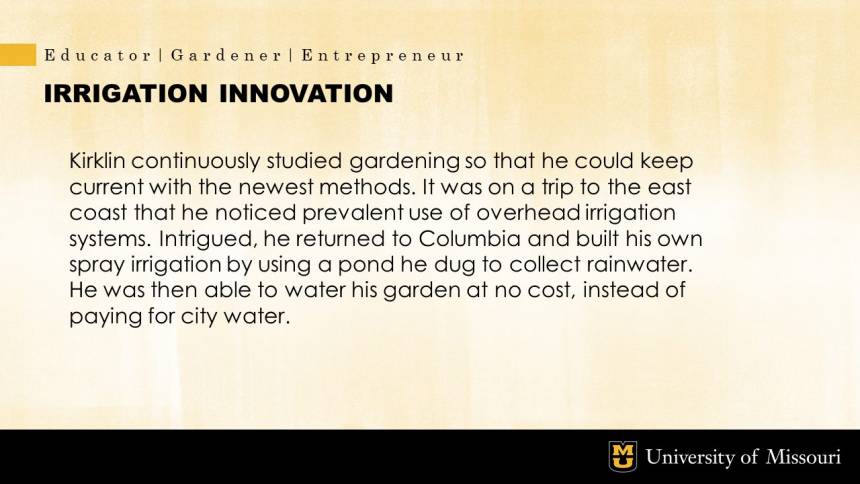 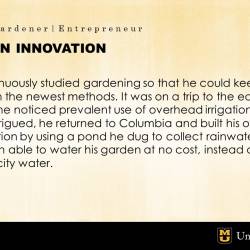 Irrigation Innovation: Kirklin continuously studied gardening so that he could keep current with the newest methods. It was on a trip to the east coast that he noticed prevalent use of overhead irrigation systems. Intrigued, he returned to Columbia and built his own spray irrigation by using a pond he dug to collect rainwater. He was then able to water his garden at no cost, instead of paying for city water. 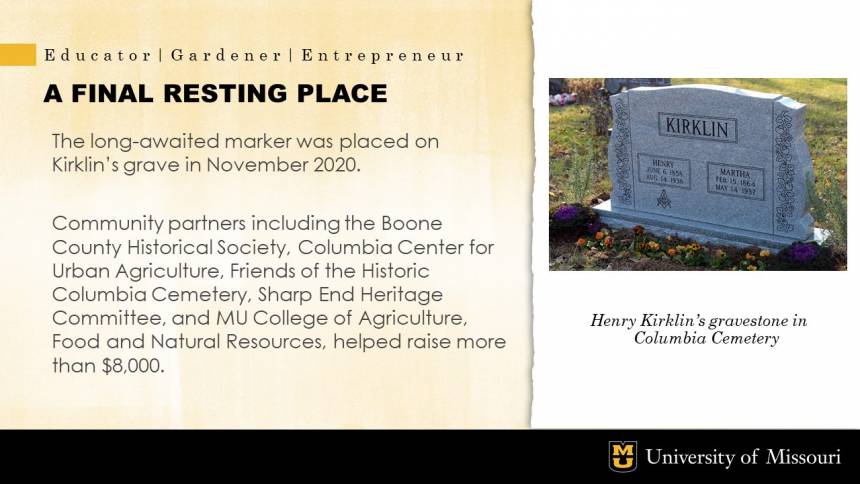 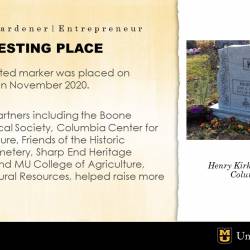 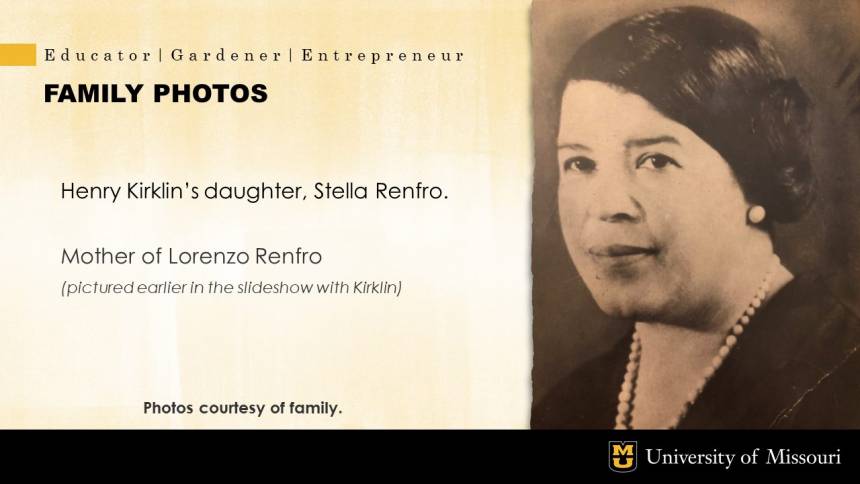 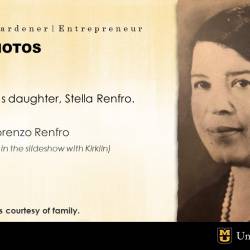 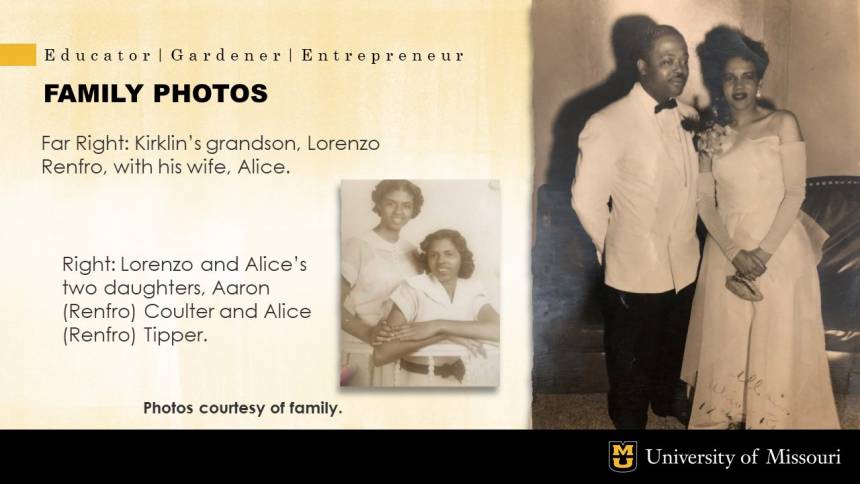 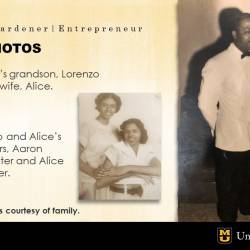 Photo of Kirklin's grandson Lorenzo Renfro, with his wife, Alice, and a photo of their daughters, Aaron and Alice. 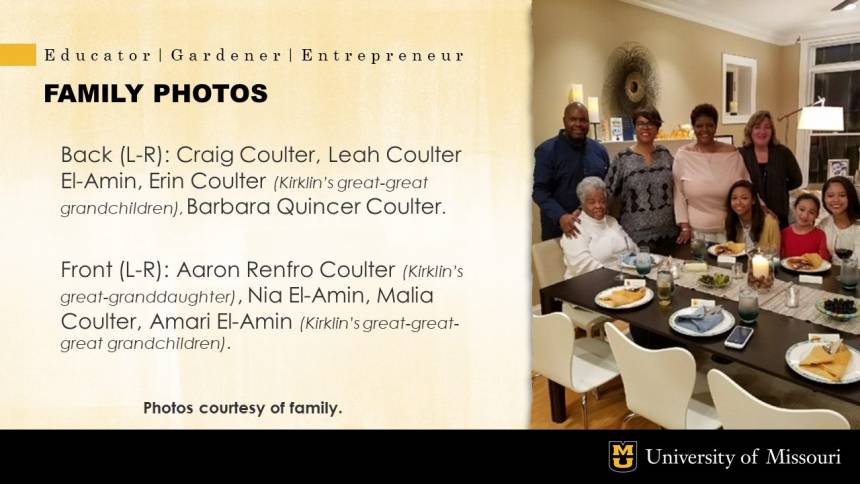 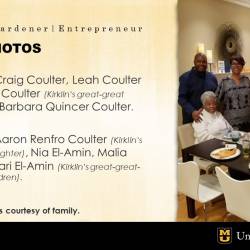 Photo of Henry's great-great granddaughter and her family. 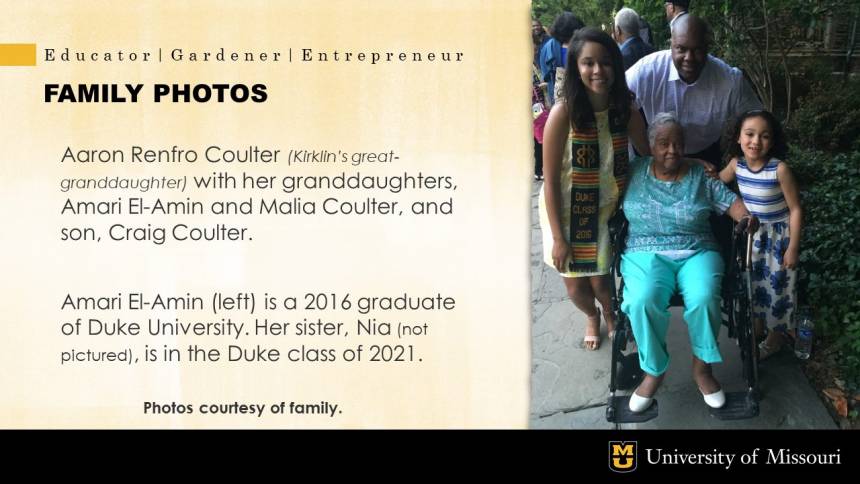 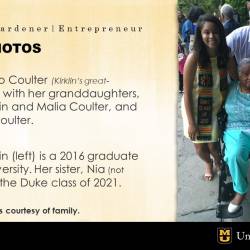 Photo of Henry's great-great-great granddaughter at her graduation from Duke. 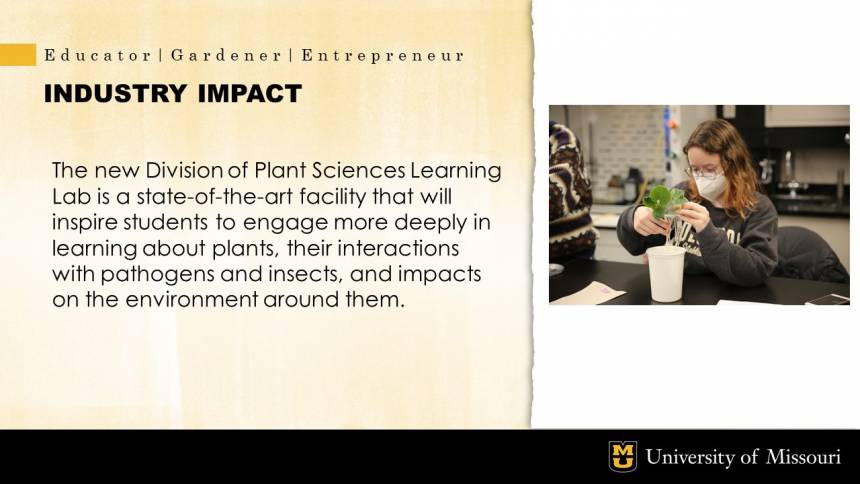 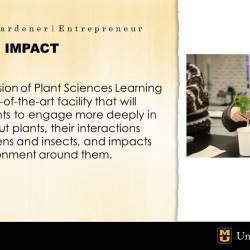 Industry Impact: The new Division of Plant Sciences Learning Lab is a state-of-the-art facility that will inspire students to engage more deeply in learning about plants, their interactions with pathogens and insects, and impacts on the environment around them. 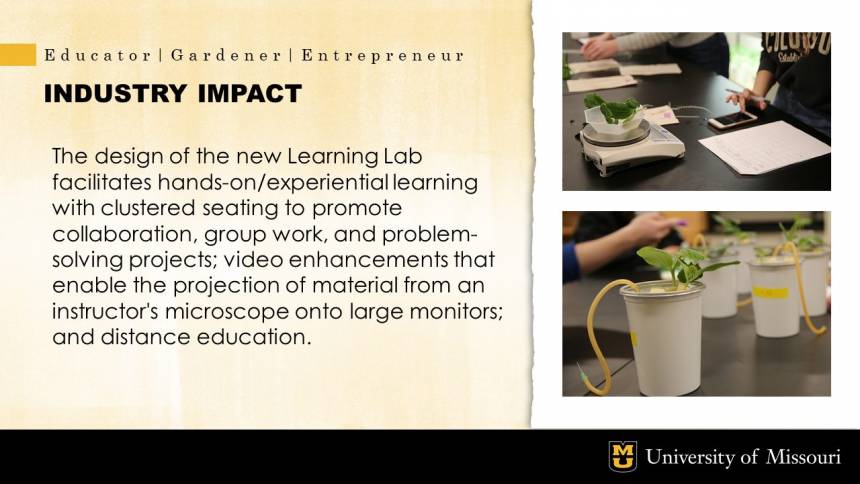 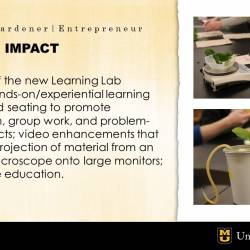 Industry Impact: The design of the new Learning Lab facilitates hands-on/experiential learning with clustered seating to promote collaboration, group work, and problem-solving projects; video enhancements that enable the projection of material from an instructor's microscope onto large monitors; and distance education.