As a seventh grader, Paxton Dahmer traveled with his family to the University of Missouri to watch his older brother, Payton, receive his state FFA degree during the Missouri state FFA convention. While taking in the entire ceremony, Paxton set a lofty goal for himself – he was going to be a Missouri state FFA officer.

“I’m a sixth-generation farmer and a third-generation FFA member,” Dahmer said. “Agriculture has been a staple of my family for years. I remember listening to my grandfather tell stories about FFA and what he was able to accomplish through the organization. Being an FFA member was not something I took lightly.”

Dahmer, who is a junior agricultural education major in the MU College of Agriculture, Food and Natural Resources (CAFNR), spent his four years at Nevada High School in Nevada, Mo., taking advantage of nearly every opportunity FFA offered. While he worked toward his goal of becoming a state officer, during Dahmer’s senior year he wasn’t sure that was the route he wanted to take.

“I always knew being a state officer was something that I was pursuing, but I was undecided if I wanted to jump in,” Dahmer said. “My brother was judging livestock in Kansas, and that was really intriguing to me. I had been judging livestock since I was 8 years old, so there was a major interest there. Eventually, though, I made the decision to apply to become a state officer.” 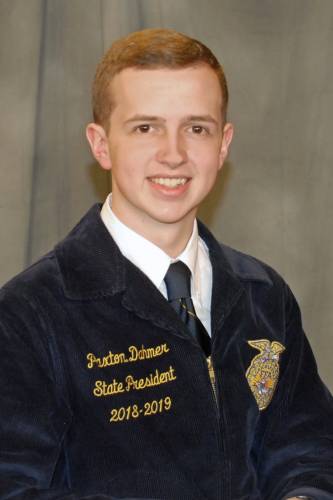 Dahmer was named the Missouri State FFA President in 2018. It was an experience that opened his eyes to new possibilities – especially becoming a national FFA officer. Dahmer ran for national office last year. While he wasn’t selected as the candidate from Missouri, the opportunity gave Dahmer a chance to take a bit of a break from FFA. That time off allowed him to reflect and find out who he was without the blue jacket.

“I had spent four years in high school in FFA, and it really became a major part of who I was,” Dahmer said. “I was also highly involved during my year as a state officer – and I wouldn’t trade that time for anything. The time off really taught me a lot about myself, though, and helped me grow in ways I couldn’t imagine. It gave me some great perspective.”

Dahmer decided to throw his hat back in the ring for national office this year. After a grueling, virtual interview process, Dahmer was recently named the 2020-21 Central Region Vice President. He becomes the first national FFA officer from Missouri since 2007 and just the third since 2000.

Even though the national officer election process was virtual, Dahmer was still presented with the corduroy box with his new FFA jacket during an in-person celebration.

“I had high hopes but I didn’t want to get my hopes up too much,” Dahmer said. “I knew I was one of the 22 finalists, and the night of the announcement was incredibly stressful. Once I found out that I was going to be a national officer, I had so much energy. It was an incredible feeling that truly is tough to put into words. I still don’t know that it has fully sunk in.”

Dahmer is the 24th Missourian to be named a national officer since FFA was founded in 1928.

“FFA helped make me who I am,” Dahmer said. “It expanded my skills, and I’ve made so many vital friendships and connections. I am so excited to represent Missouri and serve the hundreds of thousands of members across the country.”

The national officer interview process was completely virtual this year, due to the COVID-19 pandemic. Interviews were done online and new components were added, such as recording a video submission instead of taking part in a writing exercise.

“We were forced to basically write the book on how to do the process electronically,” Dahmer said. “The logistics were tough, but everyone involved did such a great job of keeping everything in order. They did a fantastic job with it.

“There were pros and cons to being completely online. The virtual experience can be really tough, as we’ve learned. However, when I was done with an interview or project, I was able to just sit down around friends and clear my mind. If I had been in Indianapolis, I wouldn’t have had that opportunity. It was an interesting experience for sure.”

Dahmer started showing cattle, hogs, sheep and goats across the country when he was just 5 years old, continuing a tradition that his family had practiced for years. Dahmer said a portion of his family has farmed since 1910; the other side started in 1928.

Dahmer was able to start his FFA journey a bit before his freshman year of high school, as Nevada does have a small junior program. Once Dahmer officially joined the organization, he took in as much as he could. He joined competitive teams and started giving competitive speeches. Dahmer also had plenty to record through his supervised agricultural experience (SAE) projects.

“The biggest part of my SAE project were retained show heifers that I had cared for well before I began in FFA,” Dahmer said. “I also bought hogs and sheep and an occasional goat at weaning weight, showed them and sold them at market weight. Our family also raises Australian cattle dogs, which I helped train and sell.

“The only new projects I took on were working at a veterinarian clinic and a show supplies company. With the vet clinic, I was able to get out in the community and learn so much about animal science. Selling show supplies was also a good time, as I was able to make numerous connections.”

Dahmer was part of several competitive judging teams, his favorite of which was livestock. His team actually won the state contest one year and they were able to judge at the national competition.

“Being able to travel with your best friends and compete together is such a fun part of being in FFA,” Dahmer said.

When Dahmer was selected to be a state officer, he began the process of selecting his next stop after high school. State officers are required to stay in the state during the year they serve.

“Growing up, I came to Columbia quite a bit to judge through 4-H and FFA – but I had never really thought about attending the University of Missouri,” Dahmer said. “Before my tour, I had never seen the columns, I had never walked past the library or seen Gentry Hall. It was a lot to take in, but I’m so glad with my decision to come to Columbia.”

Dahmer will now transition to living full time in Indianapolis, Ind. He will finish this semester at Mizzou and withdraw for the next two semesters. He will relocate to Indiana and live with his fellow national officers.

“It will be a change of pace for sure,” Dahmer said. “It’s honestly going to be a lot like freshman year all over again. Usually, the officers just have hotel rooms, as we’re on the road nonstop. Since we’ll be starting out virtually, they are providing apartments for us. We’ll get to live together and bond in a unique way.”

While the national officers won’t travel right away, there is hope that there will eventually be an opportunity to visit FFA members in person.

“It is going to be different, but I think we do need to take advantage of some of the possibilities,” Dahmer said. “In a period of about two hours, we could talk to members in Puerto Rico and members in Alaska. That obviously isn’t possible to do with in-person travel. I think there’s an opportunity to reach and influence so many more members in a short period of time.”

Dahmer said the national officers serve as brand ambassadors. He added that FFA has a very positive reputation among its members and alumni.

“A lot of members really pursue every single opportunity,” Dahmer said. “Some members don’t have those opportunities, though. They don’t have a chance to go to state convention or the national convention. I want them to know that they’re just as important to the organization – they’re truly the backbone of the organization. They’re also important to agriculture in general. I’m excited to help them realize how important of a role they play.”

And while Dahmer won’t be at Mizzou next year, he’s thankful for the relationships he’s built in his three years as a Tiger. He plans to return in January 2022 to finish up his degree.

“I’m so thankful for the networks that I’ve built at MU,” Dahmer said. “The professors, administrators and fellow students – they’ve been with me when I’ve succeeded, but also when I’ve failed. It’s such a great campus, and although I will miss being there, I know they’re supporting me in whatever I do.”