As an undergraduate student studying soybean breeding at the University of Sao Paulo in Brazil, Caio Canella Vieira came across the name Pengyin Chen quite often during his studies. Chen became a major source of inspiration for Canella Vieira – and someone who he referenced throughout his undergraduate work.

Little did Canella Vieira know that he would soon be working with the man he had read so much about.

“My experience was like that of a little kid who looks up to a superstar athlete, and you want to be just like that athlete,” Canella Vieira said. “Reading about his research was so inspiring as an undergraduate student. If you wanted to know what soybean breeding is all about – he’s the man.

“Now, just imagine that the kid who looks up to the superstar athlete has the opportunity to train with that athlete. That’s been my experience with Dr. Chen. He’s the person who I’ve looked up to for years, and I’m now working with him. It’s just incredible.”

Chen joined the University of Missouri College of Agriculture, Food and Natural Resources (CAFNR) four years ago, taking the David M. Haggard Endowed Professorship of Soybean Breeding position. The professorship is in the Division of Plant Sciences – and Chen is located at the Fisher Delta Research Center in Portageville, Mo. Before coming to MU, Chen led the soybean breeding efforts at the University of Arkansas. 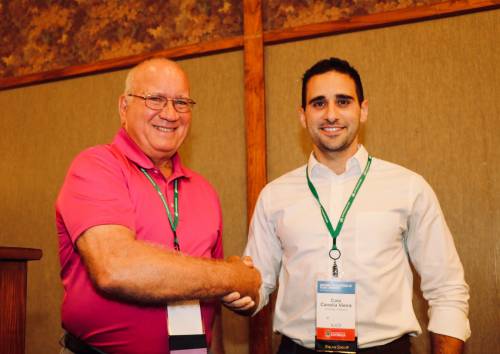 “Caio is an excellent student with strong background in agriculture, genetics and biotechnology,” Chen said. “He is well trained in science and has a broad interest, but a goal to be a successful breeder. He has helped us improve organization, logistics, accuracy and overall efficiency of our breeding program. He is very much engaged in broad collaboration with the research community and actively involved in many research projects. In fact, he serves as a PI on one of the regional research projects funded by the Mid-South Soybean Board. He has presented his research at several professional meetings, served as co-author on several publications from our research group, and won several awards. He is very bright, hard working and productive. He has tremendous potential as a young scientist and will be very successful in his career.”

Canella Vieira’s interest in soybean breeding started when he was in high school. While he first wanted to follow in his parents’ footsteps as an engineer, Canella Vieira’s older brother introduced him to the world of plant sciences. Canella Vieira was hooked.

“My brother was working on a plant science degree in Brazil and really broke down everything you could do with that degree,” Canella Vieira said. “There was also an enormous genetic program related to soybeans in Brazil where they were changing the soybeans to be adapted to the tropical climate of Brazil. I was fascinated by the idea that you could change a plant and make it better through genetics – and that change could help people and make huge impacts. I knew right away that I wanted to work in that field.”

Canella Vieira’s passion for soybean breeding only strengthened while working with Chen – and it grew even more when he was named a National Association of Plant Breeders (NAPB) Borlaug Scholar in 2019. That program supports future leaders by pairing them with a mentor, who is a member of the NAPB and focused on helping with the student’s success. Canella Vieira’s mentor is Johannes D. (J.D.) Rossouw, head of vegetables research and development with Bayer Crop Science. Rossouw was the head of plant breeding with Bayer Crop Science for two years before moving into his new role in July.

“The Borlaug Scholars Program gives you so much exposure,” Canella Vieira said. “It also opens you up to the many careers that you can pursue. I’m incredible lucky to have a mentor on the industry side and the academic side. Getting that guidance and direction from both is so, so valuable.”

Canella Vieira’s master’s degree work at MU focused on soybean resistance to southern root-knot nematodes. Canella Vieira, who earned his master’s degree in plant, insect and microbial science this spring, said the primary goal of the research was to test the soybean lines marked as nematode-resistant.

“This nematode is a very big disease for the southern United States,” Canella Vieira said. “The types of soils we have down here makes the nematode much more effective in what it does. With all of the technology changes over the years, my work focused on seeing how the resistant lines did under real field conditions to assess nematode pressure.” 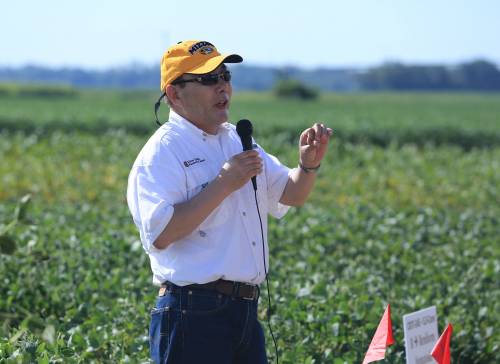 Canella Vieira said a lot of the previous research done with southern root-knot nematode was conducted in greenhouses because researchers have more control in those environments.

Canella Vieira said he collected around 4,000 samples of soil from his field plots throughout the duration of the project to see what the nematode concentration was like. He found that there was definite nematode pressure in certain areas – and that yield suffered with susceptible varieties of soybeans.

“We found that we didn’t lose yield when growing the resistant varieties, so there’s really no reason to not grow them,” Canella Vieira said.

Canella Vieira also studied resistant soybeans at a molecular level. He sequenced all of the lines so that they could figure out the genetic information of each line.

“Using the data from the field, we were able to detect new genes that are regulating resistance,” Canella Vieira said.

Canella Vieira was hired as a soybean breeding research specialist at Fisher Delta in April, and is now working toward his PhD in plant, insect and microbial science. Canella Vieira is still researching southern root-knot nematode and is also working on a project related to off-target damage of dicamba and the applications of statistics and molecular genetics to improve efficiency and accuracy in the breeding program.

“I’m working on incorporating as much genetic information and field data to better understand the impact of off-target dicamba damage on a wide variety of soybean genotypes,” Canella Vieira said. “We’re also using drones to precisely phenotype our lines and detect variations our eyes are not capable of. We’re trying to make the breeding process as analytical as possible by collecting molecular and field data. We want to make the advancement and development of soybean varieties as data-driven as possible.”

Canella Vieira said he is enjoying the opportunity to see the various career paths in his future. He’s still working through what will be the best fit.

“I had been leaning toward industry and working in a plant breeding position for a big corporation,” Canella Vieira said. “But the more I work on the academic side and get involved in writing grants and publishing my research, the more I appreciate a future faculty position. While I haven’t decided yet, I’m excited for the possibilities.”