After earning her PhD from Mizzou, Rachel Owen (center) has… Expand ▸

While she didn’t know how, Rachel Owen knew in high school that she wanted to help people. A soil science class at Iowa State University opened her eyes to numerous possibilities down that path – and her time at the University of Missouri solidified the direction she wanted to take.

Owen came to MU in 2015 to work on her PhD, which looked at how climate change impacts natural ecosystems. Just two years into that work, Owen help co-found the Missouri Science and Technology Policy Fellows (MOST).

Now, after earning her PhD from Mizzou, Owen has been named the director of MOST. The goal of MOST is to place PhD candidates, who recently received their PhD in a STEM discipline, in Jefferson City. The fellows serve as a resource for legislators while drafting or voting on bills, informing them of the benefits and consequences of their decisions from a scientific perspective. The focus of the organization is promoting long-term health, sustainability and economic growth for Missouri communities and people by connecting science and policy.

“While in high school, I really wanted to address important problems that society was facing,” Owen said. “When I was exposed to soil science at Iowa State, I realized that so many people study this discipline to make better decisions on how to produce food for the entire world. I fell in love with that. I felt like it was important for me to step up and make that my passion.”

Owen earned bachelor’s degrees in agronomy and global resource systems while at Iowa State and her master’s degree in plant science from South Dakota State University. A research project and a strong set of advisors brought her to the University of Missouri.

“After finishing my master’s degree, I was looking for a project where I could study natural ecosystems instead of agricultural ecosystems,” Owen said. “I felt this area of study would make me a more well-rounded scientist and expand my skillset.

“I was also really excited to work with two great advisors – Keith Goyne (former SNR professor and associate director, now associate dean of College of Natural Resources and Environment, Virginia Tech) and Lisa Webb (associate cooperative professor in the School of Natural Resources). It was so interesting to see how they managed their labs. I loved the atmosphere when working with both of them.”

While research took up a good majority of her time while at MU, Owen didn’t see herself working in a lab or doing long-term research. Owen had always been highly involved in extracurricular activities at each of her previous institutions, and that desire to be involved at Mizzou led her to discover policy, something she was quickly drawn to. She soon realized that policy allowed her to combine two of her passions – science and helping others. 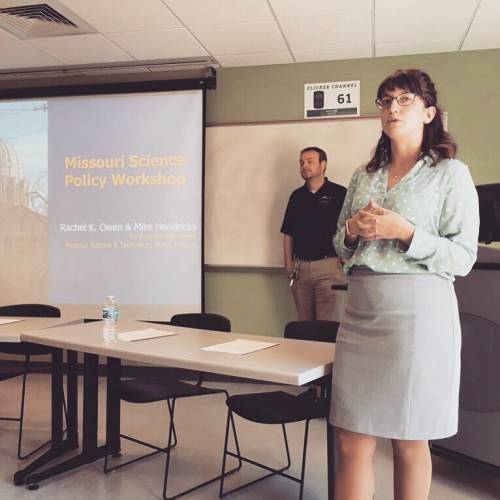 “Policy really allowed me to combine my interests,” Owen said. “It was truly the best of both worlds. I could use my science background and help others use science to make more informed decisions.”

Owen’s introduction to policy created an interest in the concept of building a state-level science policy fellowship program, mainly because she wanted to be involved in policy but didn’t want to move to Washington, D.C. That interest led to the formation of MOST, an organization she co-founded with Mike Hendricks and Hallie Thompson, who were also graduate students at MU.

The first step for the organization was to meet with local legislators to see if MOST could even work. Owen led discussions that centered on how the fellows would be utilized and how their program should be framed.

“We really wanted to have these conversations first,” Owen said. “If we were going to work to provide this resource, we wanted to make sure it would be utilized. The fellows are going to have a better experience, too, if they’re skills are being constantly used.

“Legislators in Jefferson City have so much to do in the five months they are there, and they don’t always have a lot of resources. They have to move quickly and oftentimes have to work on the fly. They can’t always seek out individuals right away, so it’s important to have scientists readily available. We can explain about the scientific method, how studies have limitations and a variety of other topics.”

After having those conversations and gathering more information, the three founders felt like the organization could succeed. They had some small grant funding available and applied for others. They received a grant from Research!America in 2018 that really opened the door for the organization.

“That grant allowed us to host candidate forums before the midterm elections,” Owen said. “It was important for us to build connections with the science communities at each University of Missouri System campus, and we were able to travel to three of them and make those connections. Many of those we met are still strong partners.”

The Research!America grant also led to an invitation for Owen to speak at a post-election briefing in Washington, D.C. Daniel Barry, local and state advocacy director for the American Association for the Advancement of Science (AAAS), was in the crowd during Owen’s briefing – and was incredibly impressed.

“He was in the process of selecting states to launch local science engagement networks,” Owen said. “He told me after my talk that Missouri wasn’t on his radar, but he wanted to check it out. That really opened the door to some national networks and allowed us to show that Missouri is such a strong hub of science and technology.”

MOST has grown considerably over the past two years, thanks in large part to more funding sources. Initial funding came from the James S. McDonnell Foundation, which allowed MOST to bring in its first fellows. Additional funding from the Gordon and Betty Moore Foundation and Chan Zuckerberg Initiative will allow MOST to bring in five post-doctoral science policy fellows this fall.

“It’s incredible to have this type of support,” Owen said. “My vision for fellows is for them to institutionalize science advice and information being incorporated into policy discussions. We hope to continue to have fellows perform long-term, legislative research. A key part of that will include building relationships between lawmakers and the fellows. We want our fellows to also be able to connect those lawmakers with trusted scientific experts.”

“Things have changed quite a bit since COVID hit,” Owen said. “I spend a lot of time in partnership development and fostering relationships with contacts I’ve met over the last year. I work to identify new nonprofits or organizations that might have an interest in working with us moving forward. I also spend a lot of time working with elected officials seeing how we can help.”

Owen is also still working closely with researchers at the University of Missouri.

“MU has been integral to the formation of MOST,” Owen said. “I know I can find faculty who can serve as a mentor and who are also experts in policy. That relationship benefits the fellows so much – that network is truly vital.

“It’s also fun to learn about the various research projects taking place at Mizzou. We don’t always think about research being policy relevant, but it’s so important. What they’re doing is very interesting to policymakers.”

Researchers who are interested in learning more about MOST can reach out to Owen through the MOST website or Twitter, or register to join the Missouri Local Science Engagement Network (LSEN).