Successful efforts by a handful of energetic horticulture students in the late 1970s led to the planning and execution of an ambitious garden project located next to MU’s Agriculture Building. The space was dedicated as the Woodland and Floral Gardens in April 1980.

A public celebration to mark the garden’s 40th anniversary and rededicate what remains of the original landscape as the Missouri Woodland Garden was scheduled to be held April 2020, but has been postponed until further notice. 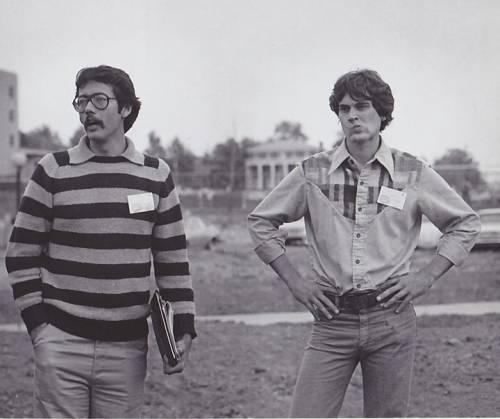 In late 1977, three horticulture students in a planting design class devised a garden plan for the east side of Agriculture building to replace an earlier garden uprooted by excavation necessary to waterproof the building. One of the students, Kevin Gerard, Ag ’78, submitted the plan to the MU Student Fee Capital Funds Improvements Committee, and $13,500 was awarded for the garden project.

“At that time, it was just a concept plan,” Ruppert said. “It was Kevin [Karel] and I who came up with a detailed plant list.”

“Bill and I began brainstorming specific design themes for the garden with each other and Professor Ron Taven,” said Karel.

Taven, a professor of ornamental horticulture, served as advisor for the garden project, visible from his office window.

The Woodland and Floral Gardens design eventually included a rhododendron garden, a native woodland landscape with a dry stream bed, a floral display, a rock garden and an oak grove. 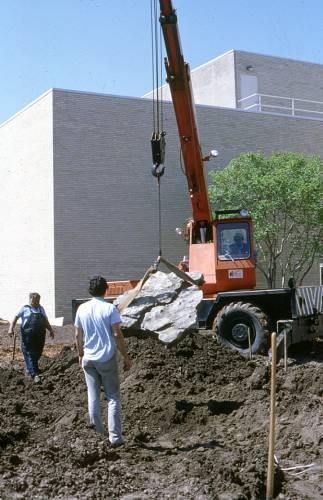 “What I called the gang of three — Bill, Kevin and Kevin — were mostly responsible for the work,” said David Trinklein, an adjunct associate professor of plant sciences. “And there was a lot to be done.”

When not attending classes or doing homework, Ruppert and Karel had a lot on their hands with the project. Manure was procured and transported from MU’s Bradford Research Farm, and MU’s South Farm helped with grading. A crane owned by the university’s Physical Plant — now Campus Facilities — was used to move and place boulders in the garden space for a hardscape element.

“One of the skills I learned from the garden project that I still use today is building relationships,” Ruppert said of lining up contracted work.

“Defining and laying out the different garden areas really made the project start to feel real,” Karel said of their progress. “We installed a project kiosk that utilized the conceptual drawing to communicate the different features of the garden.”

Students from horticulture classes and MU’s Horticulture Club pitched in.

By the summer of 1979, the themed areas of the garden were being completed. Karel had graduated in the spring and Ruppert stayed on for another year to complete work on the Woodland and Floral Gardens as a special problems class.

“Chancellor Barbara Uehling became aware of the project as it was happening and keynoted the dedication in April of 1980,” Ruppert said. “We unveiled a plaque mounted on a native limestone boulder and had a ceremonial planting of a native dogwood. It was my real graduation.” 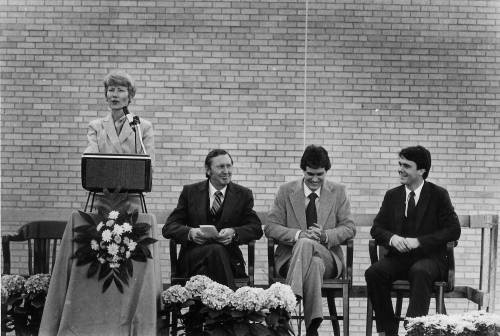 Uehling was the first woman in the country to lead a land-grant university. One of her emphases, Trinklein noted, was campus beautification. “She was adamant about it,” he said.

After graduation, Ruppert was hired by MU as a special project coordinator and for 10 years worked on landscape redevelopment and enhancement projects as part of Uehling’s campus beautification initiative.

A smaller garden within a much larger garden

In 1996, construction of the Anhueser-Busch Natural Resources Building effectively eliminated all but the native woodland landscape, which remains intact. It has continued to serve as an outdoor learning laboratory and a small green oasis of calm in the midst of a busy campus.

Uehling’s original vision to “unify and beautify” the campus took a bold step forward when in August 1999, the MU campus was designated as a botanic garden within the guidelines of the American Public Gardens Association. In 2016, “Condé Nast Traveler” named the University of Missouri one of the 50 most beautiful campuses in the United States.

“Gardens have always been important in connecting people with nature. Now, more than ever, our gardens and designed landscapes are needed to provide viable native habitat and not merely tranquil reflections of nature,” Karel said. 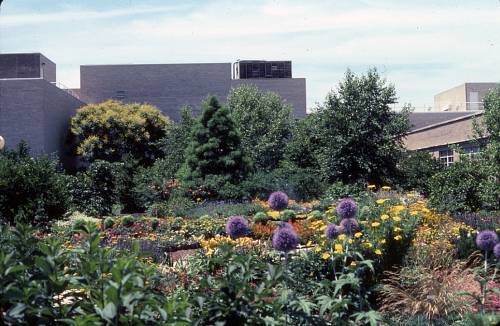 The gardens photographed at the height of summer in 1983. Photo by Duane Dailey.

“The dedication of the Woodland and Floral Gardens marked the beginning of the ensuing beatification of the MU campus championed by Chancellor Uehling,” Ruppert said. “Mizzou’s designation as a botanic garden made a formal commitment to the idea that campus landscape quality plays a key role in student recruitment and alumni satisfaction. As a MUBG board member, I applaud the efforts of MUBG Director Pete Millier and his visionary and hardworking staff on their efforts to create a landscape aesthetic beyond my wildest imagination.”

A celebration of the Woodland and Floral Gardens’ 40th anniversary will be scheduled at a later date. Watch MUBG’s website for rescheduling details: gardens.missouri.edu.