Darcy Wells, second from the left, poses with her CAFNR… Expand ▸

“It’s a little bit of an unmentionable experience that I definitely get a lot of grief for,” Wells joked. “Honestly, though, it was a first-class experience. I really enjoyed Lawrence and met so many exceptional people during that year.”

It was actually that year away from Columbia that made Wells realize how much she missed being a Tiger. She joined the MU College of Arts and Science in 1995 as the director of development. After nearly five years in that role, Wells and her husband, Addison Myers, packed up and moved to Lawrence, where Wells worked with the KU Endowment Association as the director of development for the College of Business. 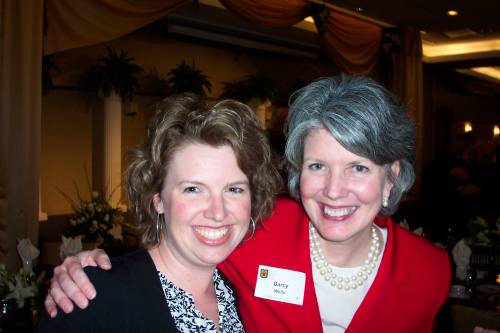 “Addison had recently retired as an actor-teacher at Stephens College and knew he could freelance in Kansas City,” Wells said. “So, we decided, ‘What the heck, let’s try something different.’ We were just getting settled when I received a phone call from the former vice chancellor for advancement at MU. He wanted me to help raise money for the Bond Life Sciences Center. I wasn’t sure I wanted to do that since we were just settling in.

“Once I got back to Columbia and talked with former coworkers and friends, I realized how homesick I was for Missouri.”

Wells returned to Mizzou in 2000 as the director of development in Life Sciences – which would mark the beginning of her career in the MU College of Agriculture, Food and Natural Resources (CAFNR). Twenty years later, Wells is retiring as the CAFNR senior executive director for advancement. Her final day was July 3.

“Working in CAFNR has been a wonderful experience,” Wells said. “I have loved working every day with the talented people that we have in this college. We also have a strong network of alumni, donors and friends. I have amazing memories from my numerous conversations through the years.”

A career in higher education wasn’t something Wells ever envisioned growing up in northwest Iowa. Attending college as a student wasn’t really even on her radar, either. That thought didn’t occur until Wells moved to Columbia.

“Addison was the artistic director of Okoboji Summer Theatre owned by Stephens College,” Wells said. “He stole the heart of a local and brought her back with him to Columbia.”

Wells moved to Columbia in 1981 – two years later she enrolled at Stephens College.

“Growing up, I just didn’t think about going to college,” she said. “I was 26 years old when I enrolled at Stephens. I figured if I didn’t like it, I would just quit. I fell in love with the entire collegiate experience.”

After earning her degree in business administration at Stephens in 1987, Wells was hoping to stay around higher education. While it didn’t happen right away, Wells eventually took her first job in higher education in the admissions office of Stephens College. She served six years as the assistant director of admissions. 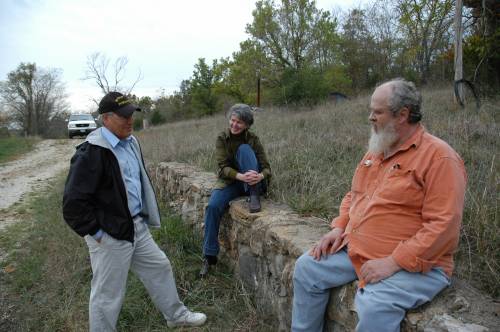 “I recruited approximately 300 students to Stephens, and thanks to Facebook, I am in touch with many of them,” Wells said. “It feels like a gift to learn about their careers and families.”

After six years in admissions, Wells was ready for something new. A colleague suggested she look at advancement. She spent one year in advancement at Stephens College before joining the MU College of Arts and Science.

“I didn’t know what advancement was, but once I did learn more, it was such a natural fit,” Wells said. “My educational experience made a massive impression on me – and I was always willing to share that experience. It was so easy for me to talk about higher education and the impact it can have.

“My move to advancement helped me learn the importance of listening to CAFNR alumni and donors and understanding the impact of their educational experiences.”

Lifelong learning has always been a focus for Wells. She earned her master’s degree in strategic leadership from Stephens in 2012.

Wells’ desire to learn came in handy when she joined CAFNR. While she grew up in rural Iowa, she didn’t have a background in agriculture.

“When I first began, I was often asked if I grew up on a farm,” Wells said. “I definitely knew what corn looked like, but that was about the extent of my agricultural education. I had so much fun learning more, though. Jim Spain (vice provost for Undergraduate Studies and professor in the Division of Animal Sciences) would share all kinds of lessons on agriculture. I remember a really exciting conversation related to the appearance of a healthy cow patty.”

While Wells was learning all she could related to agriculture and natural resources, she was also raising funds for the Bond Life Sciences Center. 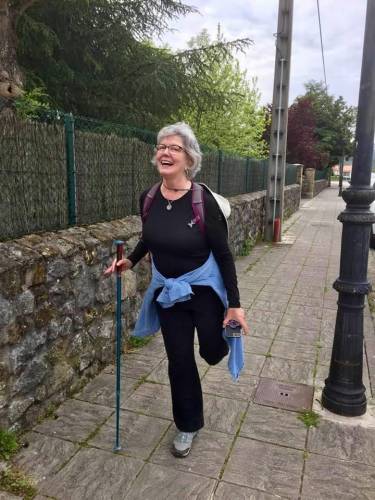 Wells said she would spend time with her husband during her retirement – and just enjoy having time to herself.

“The Bond Life Sciences Center was an amazing project to be a part of, and such a great welcome back to MU,” Wells said. “(Former CAFNR Vice Chancellor and Dean) Tom Payne was the lead dean on the project, but I had the opportunity to work with deans from five other schools, the vice provost for research and Dr. Mike Chippendale, who was managing the entire project. It was a really interesting project, and it makes me so proud to walk into that building and see the spaces named for donors who I worked with – the physical representation of their philanthropy. It was a rewarding experience.”

Wells said throughout her CAFNR career she has enjoyed working with various administrators, faculty, staff and students – especially the CAFNR Office of Advancement.

“I’m so lucky to have such incredible team members,” Wells said. “I have loved the staff and students I’ve worked so closely with through the years. When I think about my career, I’ve always tried to focus on taking the work seriously but not myself. You have to laugh at yourself – and I’ve given my team plenty of material.

“I appreciate the leadership of CAFNR Vice Chancellor and Dean Christopher Daubert. I was proud to serve on the search committee that selected Chris, and I’m grateful for the chance to work with him for three years. He cares about his people; it’s evident in his actions. I also appreciate the support and guidance from colleagues in MU Advancement and in all of the schools and colleges. They’re been so great to work with.”

Wells said she would spend time with her husband during her retirement – and just enjoy having time to herself.

“I’m really focused on taking myself on as a project,” Wells said. “I want to do some things to enhance my own life. I’m a huge fan of reading, so I know that will continue. On July 15, I began a 480-mile virtual walking tour. I have my walking shoes ready and my new Fitbit charged. I’ve given myself a year to walk the entire Camino de Santiago. I completed a portion of the walk in north Spain in 2018 – it’s time to finish.

“Whatever I choose to do, my inspiration will always be to keep learning, loving and laughing.”