In November, Everett Forkner will join the giants of the… Expand ▸

As a student in the then-College of Agriculture at the University of Missouri in the late ‘50s and early ‘60s, Everett Forkner was able to attend an international competition in Chicago as part of the Mizzou livestock judging team. There he saw the Saddle & Sirloin portrait gallery for the first time. 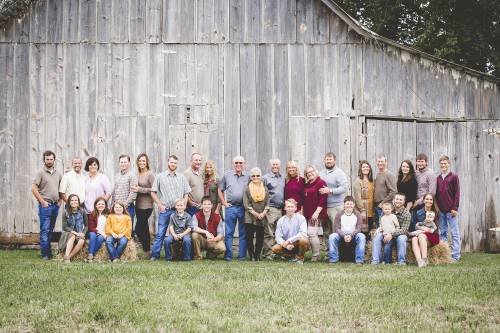 “I was really impressed,” Forkner said of seeing the great line of portraits. “Never in my wildest imagination would I have ever thought that my portrait could be hung with that group of people.”

In November, Forkner will join those giants of the livestock industry, as the 2020 inductee to the gallery.

Induction into the Saddle & Sirloin portrait gallery is an honor full of history and tradition. The portrait gallery was founded in 1903, originally established in Chicago’s Union Stock Yards where the International Live Stock Exposition resided. In order to even be nominated, the individual must have “made truly significant and outstanding contributions to the livestock industry.” Only one individual is selected to the gallery each year.

Growing up on a farm in southwest Missouri, a young Everett Forkner was already working and studying hard. In fact, he and his cousin claimed the top two spots in their graduating class – of 12! However, not knowing too many people who had graduated from more advanced studies, with the exception of a few Extension personnel, he was debating his path to pursue higher education at the University of Missouri.

“It’s the best decision I made, next to marrying my wife,” Forkner said.

“Without the University of Missouri, I would not have had any opportunity, in my opinion, of being honored with the Saddle & Sirloin.”
―Everett Forkner

Forkner said his involvement in campus agricultural organizations, in particular joining the livestock judging team, gave him the opportunity to travel and spend time with others in the livestock industry, thus learning from those industry leaders.

When Forkner graduated from the University of Missouri with his bachelor’s degree in 1961, CAFNR was just known as the College of Agriculture at that time. He is a family farmer – Forkner Farms in Richards, Mo., consists of a grain farming base of 1,700 acres, a swine breeding business known as TRULINE® Genetics, and a premium pork production and marketing business known as Truline Premium Pork™. Forkner has sold TRULINE® Genetics swine stock to 48 states and 25 foreign countries and is regularly asked to join trade missions to other countries, participating in two to three each year. 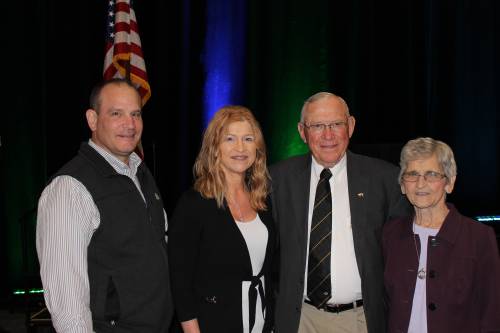 He is no stranger to notable accomplishments during and after his CAFNR career. In 1969, Forkner was named Missouri Livestock Person of the Year by the MU Block and Bridle Club – only eight years after his graduation – and was again chosen to receive this honor in 2015. He was the first Animal Sciences alumnus at the University of Missouri to receive a Column Award – the college’s highest honor. Forkner has served as a CAFNR Executive-in-Residence. He provided founder animals for Mizzou’s National Institutes of Health Swine Resource and Research Center. Just last month he was inducted into the National Pork Producers Council Hall of Fame. When asked about his leadership and expertise in the livestock industry, he says he doesn’t consider himself as such, rather that he has thoroughly enjoyed every opportunity that he was given.

Although induction into the portrait gallery is a prestigious honor, Forkner humbly said his most meaningful reflection regarding his selection was being “able to achieve something you thought was impossible.”

An original oil painting of Forkner will be framed and hung when the award is presented at the annual North American International Livestock Expo in Louisville, Ky., at the Kentucky Expo Center in November. Originally housed in Chicago, the portrait gallery moved to Louisville in 1976.