Last year, Missouri lawmakers passed a law that allowed producers to grow a crop that hasn’t been legal in the state in decades – hemp. The new law required that growers be licensed with the Missouri Department of Agriculture, and it also allowed universities to plant hemp right away to collect data for future plantings.

Seven University of Missouri College of Agriculture, Food and Natural Resources Agricultural Research Centers planted a total of seven acres of hemp throughout the state. Those plantings happened from the end of June to early July. All were between half an acre and three acres.

“This really is a once-in-a-lifetime opportunity,” said Tim Reinbott, assistant director of the Agricultural Experiment Station. “How many times do you have a brand-new, yet old crop to research? The slate is clean. I’ve been looking at the history, and it’s been really interesting. We’re excited to dive in deeper and learn more about this crop.” 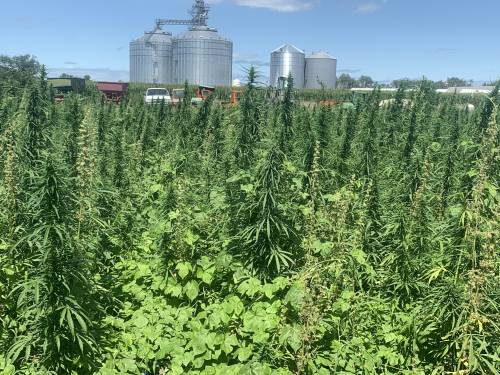 Reinbott said the participating Research Centers had a variety of results in 2019. Three locations – Hundley-Whaley (Albany, Mo.), Graves-Chapple (Rock Port, Mo.) and Greenley (Novelty, Mo.) – saw solid successes, even though all seven plantings were a tad behind the normal planting season. All three locations had good stands, especially the Hundley-Whaley Research Center, which produced around 3,000 pounds per acre. According to Reinbott’s research, a traditional harvest is around 6,000 pounds per acre.

The Graves-Chapple and Greenley Research Centers saw around 1,500 pounds per acre during harvest.

“The ideal time to plant hemp is from the first of May through early June,” Reinbott said. “We got permission to plant on June 27 and had our first plantings the next day. We were definitely behind a bit, but I was pleasantly surprised by a few locations. The three that saw the best yields were in northern Missouri, where the weather was still pretty mild during plantings. It felt more like May than July up there.”

The other four locations didn’t see results quite as impressive.

“We had a total of four hemp varieties and used two different planting methods – drilled and in 30-inch rows,” Reinbott said. “With the 30-inch rows, we had the opportunity for weed control through cultivation. With drilled plantings, the seed gets into the ground faster. We obviously saw mixed results all the way around.

“For example, we tried no-till at the Bradford Research Center (Columbia, Mo.), and it failed miserably. There was so much rain in the southeast part of the state that our planting at the Fisher Delta Research Center (Portageville, Mo.) never had a chance to grow. Our other two plantings – Forage Systems (Linneus, Mo.) and Southwest (Mt. Vernon, Mo.) – were OK but struggled to really get out of the ground.”

“There were obviously a lot of groups that reached out when we were given the green light to plant hemp,” Reinbott said. “There were several restrictions with the new law, one of which was to destroy everything we produced. Tiger Fiber was willing to work with us on all of these conditions.

“We will work with Tiger Fiber again this year. We’ll actually be able to process what we harvest, so we will hopefully have some products that are created from the hemp we produce. The fiber from hemp can be used for a variety of products, including building materials and shirts. It’s exciting to see the possibilities.”

Reinbott said there is plenty to learn about hemp as a crop. Planting depth, planting timing, harvest style and herbicide options will continue to be studied at the Research Centers, as well as what varieties work best for each location.

“We have to understand the fragility of the planting,” Reinbott said. “With soybeans, if you plant too deep or too shallow, you’re OK. Hemp didn’t seem to work the same way. Of course, we have 75 years of breeding and genetic work in soybeans. We’re still in the infancy stage with hemp.

“There are also no registered herbicides for hemp, so you’re taking some of the tools out of your toolbox to combat pests. We’ll continue to research all of these facets, including what varieties make the most sense for what we’re trying to do. We’re using hemp varieties that are somewhat modified from 100 years ago, and they were modified for Canada and not here.”

Reinbott added that understanding the market would also be part of the process.

“There is a lot you can do with the fiber and seed from the hemp crop,” Reinbott said. “That part is very obvious. What isn’t obvious is what the market looks like for these products. We have a lot to learn, but it’s definitely an exciting time to be working with this crop.”