It’s a program where political science, business, chemical engineering, food science and students from many disciplines come together to solve problems associated with poverty and food insecurity.

A part of the Brady and Anne Deaton Institute for University Leadership in International Development, the Deaton Scholars Program (DSP) is devoted to growing global sharing and application of knowledge to combat local and global hunger, inadequate nutrition and poverty. To accomplish this, the institute connects undergraduate, graduate, professional and PhD students through a collective peer mentorship program that gives students the opportunity to attend learning events centered around a wide range of topics relevant to DSP aims, enage with faculty working in these areas, participate in national and international research conferences and engage in problem-solving through student-led projects. 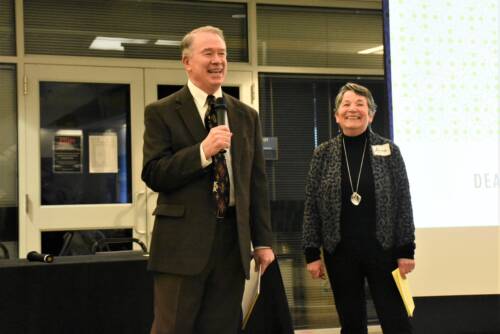 Inspired after visiting the International Association of Students in Agriculture and Related Sciences, Chancellor Emeritus Brady Deaton and Anne Deaton had an idea to start a program that would empower students to solve food insecurity issues. In the fall of 2016, they sat down with agricultural students to gain input.

“We asked the students, ‘What can we do to strengthen the education they’re getting here to address these international development issues?’” Brady Deaton said. “It was clear that students and faculty were immediately excited about developing meaningful programs that would draw on all the disciplines working together to address the issues of hunger and malnutrition around the world.”

Then-senior Maria Kalaitzandonakes and then-freshman Holly Enowski, both science and agricultural journalism students interested in food insecurity, helped lay out the framework for what would later become DSP. The students envisioned a program dedicated to food insecurity and poverty issues that was multidisciplinary and encompassed a mentoring component.

“What’s so exciting about this program is that undergraduate students who were in the College of Agriculture, Food and Natural Resources had recognized the power of all these ideas that they were getting from all parts of the university and they said, ‘If we pull this together and find a way to work together, we can come up with some new solutions to some old problems,’” Deaton said.

“What I like so much about the Deaton Scholars Program is that it is a campus-wide initiative, but really has roots in the values and the things that I learned within CAFNR,” said Enowski, who’s now a senior and a program leader for DSP. 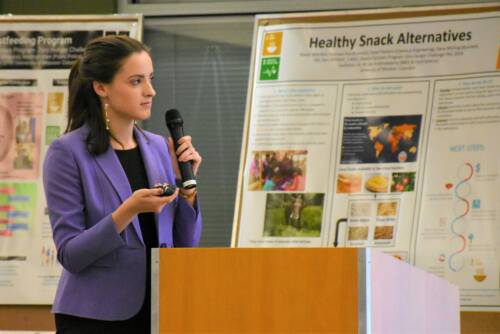 The program began in the spring of 2017 with mentor and mentee pairings; Kalaitzandonakes and Enowski modeled the first pairing. A freshman, sophomore or junior would be paired with a senior, graduate or PhD student from across different disciplines. Together, the mentor and mentee would identify an issue related to poverty and food security and work to create a final community project that offered real-life solutions to the issues the students identified.

“The DSP mentoring aspect is important to me personally because a lot of times growing up and in the early years of college I felt like people didn’t take my passion for food insecurity seriously,” Enowski said. “The mentorship aspect in DSP empowered me to take myself seriously.”

Today, DSP looks very similar to the initial year, except rather than being put in groups of two, participants work in teams of four or five students from different disciplines to frame a poverty or food insecurity problem plaguing a community in the US, or elsewhere, and generate a creative potential solution to solve or alleviate the problem.

“The team dynamic has allowed people to really find a community within DSP,” Enowski said.

There were 55 Deaton Scholars this year, and around three-fourths of the students participating in the program are undergraduates.

A previous team worked with the Columbia Farmers Market to translate the market’s written materials into different languages spoken most commonly by people immigrating to the Columbia community.

Another team identified sample plates in dining halls on campus as contributors to food waste. During their research, they calculated the amount of food waste it generated, conducted interviews with students to determine if the sample plates were needed and identified decision-makers within campus dining. The project was successful and dining halls have since stopped creating sample plates.

Deaton Scholars present their team projects during the DSP graduation ceremony and have the option of applying for possible funding to take steps to implement the project. DSP is a semester-to-semester program, so students who are still interested can continue their work in the next semester. 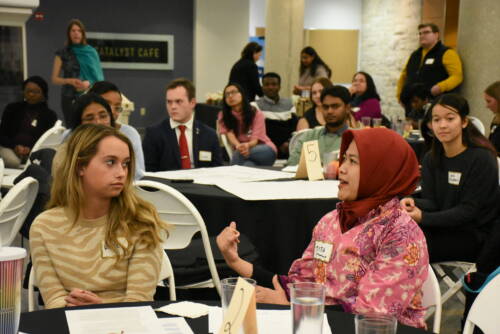 Deaton Scholars visit during their first meeting at the 2020 Opening Ceremony. Photo by Yanu Prasetyo, courtesy of DSP.

“We encourage students to work together to make something that’s tangible, that could be implemented and that would actually work,” Enowski said.

Kalaitzandonakes and another student, Paula Herrera Gudiño, started a project called the CoMo Radish Institute that works with a teacher in the Columbia Public School District who teaches English-language learners. The project is a week-long introduction to food and agriculture for international students. Kalaitzandonakes’ program allows students to visit with nutritionists, farms and grocery stores to learn about Missouri agriculture. The program has continued, with the second rendition happening in April 2020.

“The most exciting part is seeing what a group of young people can come up within just a couple of months’ time,” said Lindsey Saunders, associate director for program operations for CAFNR International Programs.

“You can tell they take it very seriously and they learn their modes of influence,” Saunders said. “The whole Deaton Scholars Program is about making change through community action, innovation and new technologies.”

Kiruba Krishnaswamy trained in food processing engineering at Tamil Nadu Agricultural University in India, where she started to understand how technology could improve the lives of people, in preventing post-harvest losses and food waste and in addressing malnutrition.

She studied at the same university where M.S. Swaminathan, a recipient of the first World Food Prize, researched high-yielding wheat and rice varieties, which would later be introduced to India’s farmers, ensuring food security. Krishnaswamy described her time at Tamil Nadu Agricultural University as “inspiring,” which would later lead her to receive a master’s and PhD at McGill University and post-doctoral degree at University of Toronto. 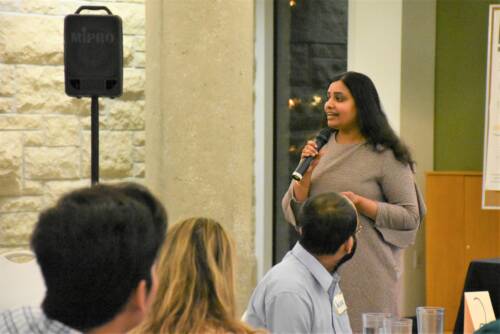 Krishnaswamy, an assistant professor of food science and bioengineering, moved to Missouri in 2018, and because of her background, she was looking for people and programs working in the food security space. She met Brady Deaton in the fall of 2018, both sharing a common vision towards food security and empowering students. This led to the creation of the Zero Hunger Challenge Course in the fall of 2019.

The Zero Hunger Challenge course is complementary to DSP, where students receive academic credit to pitch their innovative ideas to funding agencies, UN officials, foundations and beyond.

“Kiruba’s course added a whole dimension that’s very exciting,” Deaton said. “We’d love to see more courses across disciplines developed to the extent that it fits the aims of the students.”

Similar to DSP, the Zero Hunger Challenge course is semester-long and empowers students from various disciplines to tackle real-life global food and nutrition security and challenges.

“The Zero Hunger Challenge course is another way for students to be Deaton Scholars and experience our flagship program in a different way,” Enowski said.

Students incorporate Sustainable Development Goals (SDG), which have been adopted by 193 countries to create a shared blueprint for peace and prosperity for people and the planet.

“The problems we are facing, especially the global challenges like hidden hunger, malnutrition, need people from multiple disciplines to come together to solve the problem,” Krishnaswamy said. “Once you graduate, you have to work with people from different walks of life, so this course tries to bring students from different disciplines together to work towards a grand global challenge.”

Currently, the course is the only academic credit option within DSP, but there are plans to expand in the future to more course offerings.

“I am excited about this program because we are providing a platform to think outside their box,” Krishnaswamy said. “Students better understand how problems in food, health, climate, education are connected and that we need to work together.”

For Enowski and Deaton, watching DSP grow throughout the years has been “exciting, stimulating and worthwhile.”

“When the Deaton Scholars Program started, people thought we were crazy and they didn’t think the program was suitable for undergraduate students,” Enowski said. “Now, to see it have name recognition on campus, to see projects funded and people move on to graduate school with a focus on food insecurity or using some aspect of what they learned in Deaton Scholars beyond the program, has been the most rewarding part.”

The Deaton Scholars Program is supported by the Provost’s Office, colleges across MU, and donors around the world. CAFNR International Programs supports DSP with administrative and logistical support. Deans from all MU colleges also offer financial support on the basis of how many students in their college are DSP participants, and faculty from all colleges generously give of their time to speak at events and be a resource to student teams.

Applications for the Fall 2020 DSP cohort will be released mid-2020. Applications can be found on the DSP website.