Eager to make an impact on the world through agriculture, Holly Enowski attended the U.S. Department of Agriculture’s Future Leaders in Agriculture Program in Washington, D.C. this February.

“It’s a really great opportunity to meet people who are just as interested in making the world better through agriculture as you are,” said Enowski, a senior studying science and agricultural journalism.

The USDA Future Leaders in Agriculture Program brings together around 20 undergraduate and 10 graduate students every year from across the nation to spend a week engaging in various learning opportunities. Students learn about the different agencies within USDA and what each does, as well as agribusiness, scientific research and agricultural policy. The week-long program concludes with USDA’s largest annual meeting, the Agricultural Outlook Forum, which provides an overview of all areas of agriculture, both foreign and domestic. This year’s program took place Feb. 17-21.

Applicants for the program wrote an essay about agriculture as a career.

Enowski first heard about the program from previous student participants from the University of Missouri and was reminded to apply after reading CAFNR Info, an informational email sent weekly to CAFNR students, faculty and staff. Enowski was hesitant to apply at first because previous MU participants had studied agricultural economics and Enowski didn’t know if her major would rule her out from attending. She decided to apply anyway and is thankful she did. 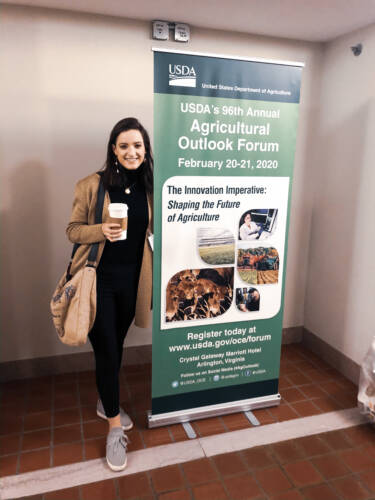 “Now that I went, I saw that there are students who attend the program from all across the board in terms of majors,” she said.

For Enowski, the program was “empowering.”

“There were many times throughout the week when we were told ‘we actually think you’re the future leaders,’” Enowski said. “It’s not just the slogan or the tagline of the program. They really made us feel empowered to believe that too.”

The program also provided Enowski with the opportunity to network with USDA employees and peers from other colleges. She said the program allows undergraduate and graduate students to intermix as one cohort, rather than splitting the students based on level of degree.

“That was one of my favorite parts of the program,” said Enowski, an Eldon, Mo., native. “I’m from a small town that doesn’t have a lot of diversity, but our entire cohort was so diverse. It was a great opportunity to learn from others and their experiences; that’s probably what I gained most – learning from the other people in the program.”

Aside from the connections she made, the conversations surrounding agriculture helped align her passion for food insecurity and agriculture.

“For me, I’ve always seen [food insecurity and agriculture] as kind of two separate compartments and that’s probably the biggest thing that I took away,” Enowski said. “I no longer have to say I’m only interested in food security, because food security and ag are connected; you can’t do one without the other.”

Enowski said this was the first conference she’s attended within agriculture where they’ve talked about agriculture and food insecurity together. The program allowed her to learn about new initiatives USDA rolled out that involved hunger.

Students interested in participating in the USDA Future Leaders in Agriculture Program should look for an announcement of the program in early November. Enowski encourages students to submit the application, which includes an essay, resume and one letter of recommendation in mid-November sent to Lena Johnson, to be chosen to represent the University of Missouri. Each institution completes a pre-selection process by choosing the best two essays among the applicants.