“I had no interest in agriculture,” Angle said. “I grew up in the city, in Baltimore, and I didn’t really have any ties to agriculture. I did love golf and was focused on becoming a golf course superintendent. It just so happened that turf management was part of the agriculture college at the University of Maryland.”

After finishing his bachelor’s degree in agronomy, Angle decided to stay for a master’s degree at the suggestion of Duane Wolf, a professor at the University of Maryland and a University of Missouri graduate. 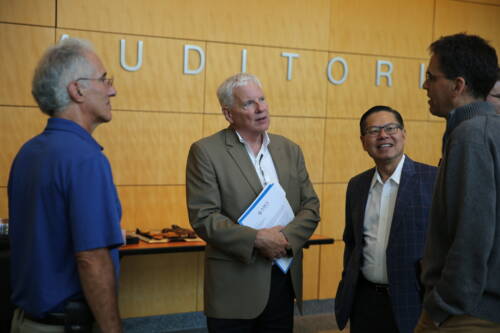 “I really respected Dr. Wolf, so when he made the suggestion, I definitely listened,” Angle said.

Angle, the director of the United States Department of Agriculture (USDA) National Institute of Food and Agriculture (NIFA), earned a master’s degree in soil science and was ready to work toward his PhD. Wolf said there was really only one option – the University of Missouri. Angle was accepted at MU and eventually earned his PhD in soil microbiology, studying under George Wagner.

“I was incredibly lucky to have two great mentors in Dr. Wolf and Dr. Wagner,” Angle said. “Dr. Wagner was the best I’ve seen at knowing when to allow someone to take off and run on their own, as well as when to pull the reins back and provide consultation. That balance is very difficult.

While at MU, Angle’s research focused on a carcinogen called aflatoxin. That carcinogen is produced naturally by fungi in the soil and contaminates things like corn and peanuts. Angle did some foundational work looking at the life cycle of aflatoxin.

Angle followed his time at Mizzou with a long career as a soil microbiologist. He first returned to the University of Maryland and worked 24 years as a professor of soil science and an administrator (director of the Maryland Agricultural Experiment Station and Maryland Cooperative Extension).

In 2005, Angle moved to Georgia and served as the dean and director of the College of Agricultural and Environmental Sciences at the University of Georgia, a position he held for a decade.

“While at Maryland, I was able to accomplish a lot,” Angle said. “My term was coming to an end and it felt like it was time to tackle a new challenge. I had great experiences in both places.”

Angle’s next stop was as the president and CEO of the International Fertilizer Development Center (IFDC), a nonprofit with work related to soil fertility. Angle coordinated development projects in several diverse regions of the world and spent the majority of his time in Africa.

“That experience really gave me a great look into the needs of sub-Saharan Africa and the hunger and food issues they face every day,” Angle said. “In the United States, we talk about hunger and poverty, but you don’t realize the extent of it until you’re in an area that experiences that on a daily basis. That job really showed me how the agriculture industry is so important for the future.”

All of Angle’s stops over the years prepared him for his current role as director of NIFA. It was a little more than a year ago when Angle took the position.

“I’ve worked with NIFA throughout my entire career,” Angle said. “It’s the primary funding agency for ag research in this country, as well as for teaching and extension.

“It’s been intriguing to be on the other side of the desk. My main focus is listening to the needs of stakeholders and making sure money is directed toward solutions to those problems.”

Angle said that Mizzou is consistently one of the top recipients of NIFA funding.

“It’s amazing to see the ag research across the country and the difference we’re making,” Angle said. “The work we’re doing is going to be vital moving forward as we have to feed a growing population.”