As a senior in high school, Cathy East had two in-state offers for scholarships to play soccer, one from the University of Missouri-St. Louis and one from Missouri University of Science and Technology in Rolla, Missouri.

Growing up in St. Louis, East knew she wanted to go somewhere new for college, so she chose Missouri S&T, with the intent to transfer to the University of Missouri-Columbia as a junior to enroll in the School of Journalism. At the time, MU did not have a women’s soccer team. When she came to MU as a junior, East found it challenging to enter the MU School of Journalism with the type of courses she had taken at Missouri S&T, mostly science and math classes.

“I had also taken an entry-level nutrition class, and that’s where I really found my love for food science,” East said.

Little did she know, the food science course would soon lead her down a very different path than she had envisioned for herself, one as a professional in the meat industry. East graduated from MU in 1990 with a degree in Food Science and Nutrition. Now, she serves as the Vice President of Corporate Procurement supporting the meat, seafood and deli food service procurement departments for Albertsons Companies in Boise, Idaho.

From Nov. 6-7, 2019, East visited campus as the College of Agriculture, Food and Natural Resources’ Robert O. Reich Executive-in-Residence. The program brings industry leaders to the college to share knowledge and experiences with students, faculty and staff. During her visit, East lectured to students in CAFNR to provide insight gained throughout her career. 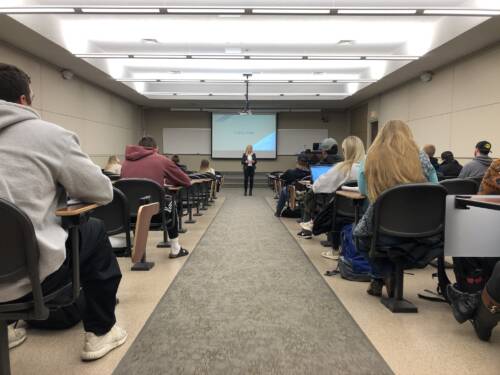 “This is such a great opportunity for the students to speak to someone,” East said. “A career is a journey. You may start off thinking that you know what you want to do; I thought I did.”

East hopes students will take away the important role CAFNR will have on their careers.

“The CAFNR experience is a very fundamental and foundational experience that students will use every day in their careers,” East said. “There is not a day that goes by that I do not make decisions based on what I learned here at the University, especially with respect to food science and food safety specifications. I hope the students understand that they will use what they’ve learned here because it’s foundational.”

East said one of her favorite parts of being a CAFNR student was the relationships she developed with the other students, something that helped her throughout her career.

“I grew up in the city, but in CAFNR I got to meet a lot of students who grew up on ranches or in agricultural communities,” she said. “The way we would collaborate and bring different things to the table and work with each other was really unique.”

Being a member of the CAFNR dairy judging team helped foster that collaborative environment.

“I really missed being a part of a team; I played soccer all my life and that was a big part of who I was,” East said. “Being on the dairy judging team was a great experience because it allowed me to be part of a team, work with others, train with them and be a part of a collaborative environment that made us a team outside of sports.”

Another highlight from East’s time as a CAFNR student was the support she received as a transfer student.

“I had some tremendous mentors who gave me some great direction,” East said. “As someone who came in as a junior transfer student, who didn’t really have a lot of experiences throughout the school, they were very nurturing and fostering.”

East said Dr. Robert Marshall and Dr. Hildegarde Heymann, both professors within the Food Science Department, were influential during her time at MU.

After graduating from MU, East began her career as a beef production supervisor for IBP, now Tyson, in Joslin, Illinois.

East described that position as being “a fantastic experience that was much different than I anticipated.”

In her role, East, who at the time didn’t know how to cut meat, was responsible for staff on the cutting floor who were two to three times her age.

“I admired so many of the people who worked on those lines because they had come from circumstances that were not all that great,” she said. “They didn’t have the highest paying or most glamorous job, but they were hard workers and they showed up every day. It taught me a lot about people and to always understand people’s stories. That was really the first foundation for my career.”

From there, she moved to corporate offices, working as a quality control project manager for IBP. During East’s time in this position, she worked on several major initiatives including the development of the first HACCP (hazard analysis critical control point) documentation in a beef production facility. From there, East moved to a similar role working for Safeway, Inc., where she was responsible for meat purchasing specifications, yields and data governance. When Albertsons Companies acquired Safeway, East was promoted to her current role.

As an alumnus, she’s got some advice she’s learned throughout her career for students.

“Learn from people and find mentors and advocates.”