During Kristi Livingston’s senior year at Central College in Pella, Iowa, Livingston decided to intern for the State Legislature, a decision that would take her down an unexpected career path.

“It turned out to be one of those unexpected decisions that gave me a lot of opportunities,” Livingston said.

When she was asked who she wanted to work for in the State Legislature, Livingston gave an uncommon response.

“I wanted to work for someone who was on the agriculture committee,” she said.

Growing up on a small, diversified farm near Lorimor, Iowa, that was home to corn, soybeans, hay, oats, milo, beef cattle, sheep and pigs, it wasn’t until after college that she realized how interested she was in agriculture as a career.

Livingston was assigned to intern for then-State Representative Cooper Evans in 1978. She interned with him again in 1979 while in graduate school studying public administration at Drake University. For the next 15 years, Livingston worked for Representative Evans.

“He was a unique person in that he wanted to give his staff lots of opportunities to grow,” Livingston said.

It was during one of these opportunities that Representative Evans invited Livingston to a meeting that he had with then-Presidential candidate George H.W. Bush. It was the first time Livingston met Bush. 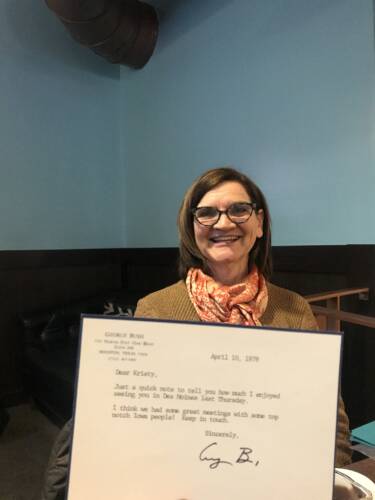 Livingston with a note from George H.W. bush after her first meeting with him in 1979.

“What you have to know is that my parents were not involved in politics; no one in my family was,” Livingston said. “I had a great life, a wonderful family, but I’m sure that we grew up at the poverty line and didn’t even know it because we raised all of our food.”

Because of connections she had made while working for Rep. Evans, Livingston began working on George H.W. Bush’s campaign coordinating agriculture.

“It was an incredible experience for me because I was familiar with Midwest agriculture, but then I was working with agriculture all across the US,” Livingston said.

“They called and finally I said yes and drove to D.C. two days later,” Livingston said.

In 1989, Rep. Evans was appointed as George H.W. Bush’s Special Assistant to the President for Agriculture Trade and Food Assistance, a position that was created after the farm crisis of the 1980s to assist and advise the president to improve and enhance food assistance programs, agricultural trade and more. 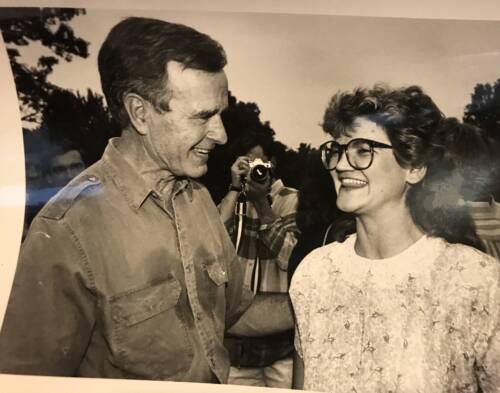 Livingston went to work in the White House, working under Evans. She would listen to agriculture groups on behalf of the president, identifying emerging or key issues of which the president should be aware.

When Bush was inaugurated, he gave his staff marching orders. Livingston wrote them down and kept them at her desk while working in the White House.

The marching orders said: “Think big; challenge the system; adhere to the highest ethical standards; be on the record as much as possible; be frank; fight hard for your position; when I make the call, we move as a team; work with Congress; represent us with dignity.”

“I think there are principles in those that apply to anything you can ever do,” Livingston said.

Livingston didn’t stay in Washington, D.C., as long as some did. Her son, Cooper, named after Rep. Evans, was born in D.C., but soon after, Livingston decided she didn’t want to raise him in Washington. While in D.C., she worked with an MU graduate, who sent Livingston’s resume to Brady Deaton, who was then-chair of the Agricultural Economics Department. While taking economics classes at Mizzou, Livingston was asked by Mike Cook to join his team working for the Graduate Institute of Cooperative Leadership and the Missouri Institute of Cooperatives.

Livingston has resided in Missouri since, splitting her time between Columbia and her farm, located in Sullivan County. The farm consists of pasture and hay for cattle, row crops and a 20-acre orchard filled with Asian pear trees, pecans trees, chestnut trees and black walnut trees.

Livingston still uses what she learned while working in Washington as a program project coordinator for the College of Agriculture, Food and Natural Resources Division of Applied Social Sciences.

“One of the most important things I learned was the value of credible knowledge and research,” Livingston said. “I learned to reach out beyond my knowledge and ask other people for input.”

Livingston was quick to point out that there are many people within her division and on campus who have had tremendous experiences in Washington.

“I’m still incredibly humbled by the fact that I had this opportunity,” Livingston said.

She encourages others to work in D.C. if given the chance.

“I have had the incredible fortune of being asked and encouraged to accept new positions,” Livingston said. “What came next was always interesting, with opportunities to work on behalf of farmers. For not having a plan, it all tied together and turned out much better than any plan.”