It was 10 years ago when Shibu Jose joined the University of Missouri College of Agriculture, Food and Natural Resources (CAFNR) as the H.E. Garrett Endowed Chair Professor in the School of Natural Resources (SNR) and the director of The Center for Agroforestry. During the past year, Jose has served as the interim associate dean for research in CAFNR and director of the Agricultural Experiment Station (AES), CAFNR’s network of research centers throughout the state.

The interim tag has now been officially removed. Jose’s appointment as associate dean for research and director of the AES is effective immediately.

Jose became the director of SNR in 2017 after eight years as the H.E Garrett Endowed Chair Professor. He has an extensive history of conducting in-depth collaborative research, and advising graduate students, post-docs and visiting scientists.

“I’m extremely humbled to know that I have the opportunity to continue to serve CAFNR in this role,” Jose said. “The past year has been very eye-opening for me. Although I have been a part of CAFNR for the past 10 years, seeing everything that our college offers from a research perspective up close and personal has been incredible. We have an outstanding group of researchers conducting world-class, public impact research. It’s truly exciting to help drive our research enterprise to further distinction.”

Jose made it a focus to ramp up the communications efforts related to CAFNR’s various research projects during his year as interim, and he plans on continuing those efforts. Jose implemented an electronic newsletter, CAFNR Research Digest, that reaches an internal audience, as well as numerous stakeholders throughout the state. 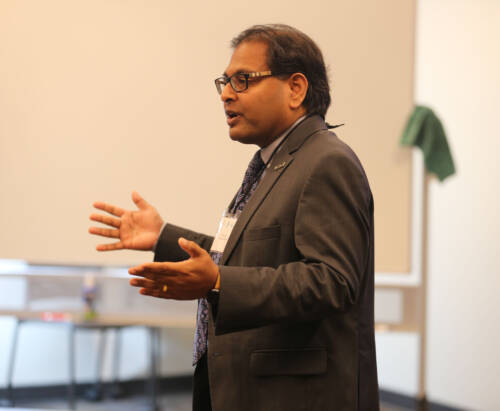 “Dr. Jose hit the ground running when he was named interim, and we are thrilled to announce that he will continue in the role as our associate dean for research. Dr. Jose brings a wealth of leadership skills to the office, and he adds great depth and perspective to CAFNR administration,” said Christopher Daubert, CAFNR vice chancellor and dean. “Dr. Jose has been a great champion of our strategic plan, and has used that plan to build confidence in our research faculty and staff. CAFNR is a major research enterprise on campus, and we will be a leading contributor to help MU achieve its research objectives. Dr. Jose has the vision, commitment and experience to carry the college and its research mission to higher levels.”

CAFNR’s research footprint has continued to grow during the past year, with a 13 percent increase in research expenditures and the addition of the newest outlying Agricultural Research Center to the AES network, Land of the Osages.

“It’s critical for us to communicate our research findings not only within our college, but also with our stakeholders,” Jose said. “Our stakeholders need to understand what we do, why we do it and how it helps make their lives better. We take the research and apply it so that our agriculture, food and natural resource sectors can be productive for our stakeholders and serve our citizens better. We serve our Missouri citizens, but the work we do has implications globally. We truly are a global college with deep roots right here in Missouri.”

Jose has been awarded approximately $46 million in research contracts and grants, including $13 million as a principal investigator, over his career.  As a broadly trained ecologist, he has worked in agroecosystems, and agroforestry and forestry systems in the US and overseas. He has led large interdisciplinary projects involving scientists, producers and other stakeholders from all sub-disciplines of agriculture and natural resources during his 22-year academic career.

Jose has advised 53 graduate students, 21 visiting scholars and 11 post-docs. He has published 146 journal articles, contributed to 42 book chapters, and edited 11 books. Jose has more than 7,200 citations to his credit.

He currently serves as Chair of the Forestry Research Advisory Council that advises the U.S. Secretary of Agriculture.