Little did Stefanie Gray’s neighbors know that when they let her borrow their tiller, she would soon be on her way to becoming a master gardener.

When she’s not cultivating relationships with donors as the senior manager for donor relations in the College of Agriculture, Food and Natural Resources’ Office of Advancement, Stefanie’s busy cultivating her backyard. 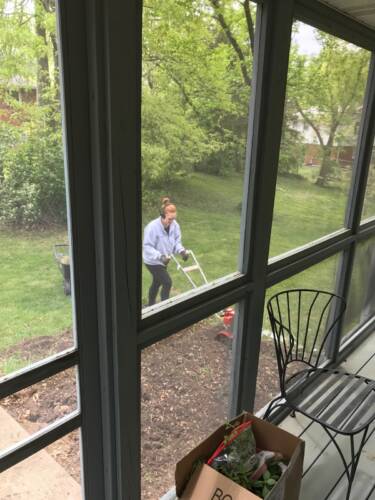 With an undergraduate degree in journalism and a master’s in higher education, both from MU, “you’re not learning about plants in those areas very often,” Stefanie said, which prompted her to sign up for the Master
Gardener course so she could learn best practices.

While Stefanie officially earned the title of Master Gardener after completing the University of Missouri’s Extension Master Gardener program this year, Stefanie said she likes to joke when she says she’s a master gardener.

“If you drove by my house, there’s no one that would say ‘I bet a master gardener lives there,’” Stefanie said with a laugh. “I don’t want to put that title out there as if I know what I’m doing because I’m still learning; I know just enough to be dangerous.”

Growing up in Springfield, Missouri, Stefanie said she had exposure to gardening and recalls watching her mom digging in the dirt, always planting something new in their family’s lawn, and visiting her cousins’ dairy farm and vegetable gardens.

Stefanie’s gardening journey began during maternity leave in early 2017 after having her daughter, Lois. Stuck inside during the winter months, Stefanie found herself gazing from her back window on what she thought was the perfect spot for a garden, leading her to till the spot once the weather warmed up.

Turns out, the spot wasn’t perfect since it doesn’t get enough sunlight, something she would later learn. For now, though, she’s content with the garden and has planted tomatoes, lettuce, peas, cucumbers and even hops. 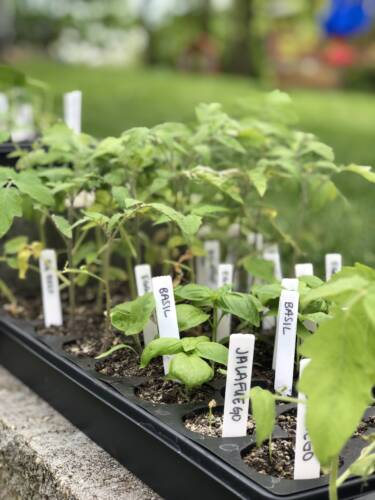 “Our neighbors are going to think we’re crazy by the end of this with all the crazy plants and hops we’ve got growing at the back of the house,” Stefanie said with a laugh.

Stefanie’s husband, Alex, brews beer, so growing hops combines their two past times. Stefanie used research conducted by MU Extension horticulturalists Jim Quinn and Patrick Byers to get started. This year, three of the five hops rhizomes they planted grew, with one growing cones. The Grays plan to harvest them later this fall.

“The thing that is so appealing to me – and a part of this is the season of life I’m in, I have a little kid, and we are home a lot – so I think one thing I love about it is that it’s something I can do at home, with my daughter,” Stefanie said.

Stefanie finds peace in her garden, away from the pings from emails and texts of the fast-paced world.

“The thing that I love the most about it is it’s slow and there is nothing about it that is like instant gratification,” Stefanie said. “Everything else is so rapid-fire in this world; your inbox is going off like crazy, text messages go nuts, everything has to happen so quickly. When I get in that part of my day where I get to be in my yard or the garden, everything has to slow down. It’s months and months of work coming together later. You’re waiting a long time for things and I like the idea that I get to teach that to Lois as well. As she gets older she’ll realize that not everything is so quick.” 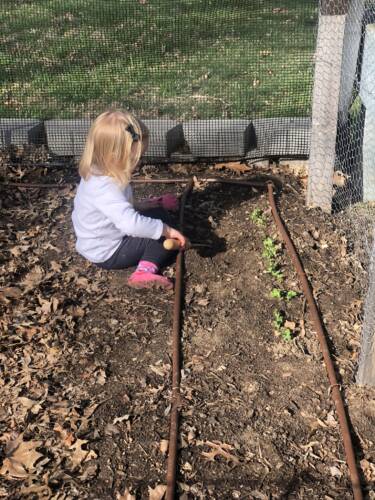 “I’ve learned a lot about the science of gardening, and I still have a lot to learn there, but gardening has also given me the chance for a lot of self-reflection,” Stefanie said. “A lot of the time with myself I’m like ‘Oh, I’m more impatient than I thought I was, or I procrastinate,’ like with weeding, more than I would like to think I do,” Stefanie said.

To track what’s going on in her garden, Stefanie created an Instagram account, @GreenAndGrayGarden, and blog for her garden, as a way of keeping a garden journal.

“It’s been a fun way to connect with friends that don’t live in Missouri and to hold myself accountable,” Stefanie said.