In the early 2000s, the Forage Systems Research Center introduced warm-season grasses in an attempt to research pasture diversity. The Center took a whole-farm approach to the research, with mixed warm-season and cool-season grass pastures.

That was just the beginning of the Research Center’s interest in warm-season grasses and how those grasses can work in the Center’s cattle grazing system.

“Missouri is a prairie state with a lot of warm-season grasses,” said David Davis, superintendent of the Forage Systems Research Center. “Those grasses are well adapted and do well here. Within Missouri, there are obvious climatic and environmental differences from north to south and east to west, but they do really well.” 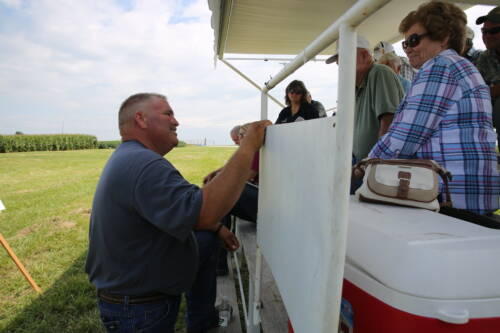 Warm-season grass stands take a while to become fully established. Davis said the Research Center did preparation work for the pastures in 2016. Like most forage research, there is a process to it.

“You can’t just flip a switch and have a warm-season grass stand,” Davis said. “You have to take the time and get it established.”

Naumann said the Forage Systems Research Center has phenomenal fescue grazing stands for its herd in the spring and solid grazing in the fall. There is a gap (summer slump) during the hot summer months. That’s where warm-season grasses could play a role.

“The idea is to build a resilient system around beef cattle production, capitalizing on the fescue we’ve got in the spring, rotating into a highly productive system in the summer with more drought-tolerant warm-season grasses,” Naumann said. “We then rotate back to the fescue in the fall. We’re essentially taking the seasonality of the forage systems out of the picture. With that rotation, we’re evening out the unevenness of the forage system. We think it could benefit the farmers in a huge way.”

Davis and Naumann got to see their warm-season grasses in action during the drought of 2018. The Center was in the middle of the drought and dealt with those conditions for a prolonged period of time.

“Being in the heart of the drought, our cool-season grass pastures went summer dormant right away,” Davis said. “We moved our livestock to soy hulls. We knew we’d be short of feed for the rest of the summer. We had enough hay for the winter – we just couldn’t get to the winter. We had to feed something in between.

“Our warm-season grasses continued to grow, so our herd at least had an option. As we went into the fall, we normally pull those animals off of a warm-season pasture, but we ran them all summer long on the warm-season pasture. While we expected those pastures to continue to grow, the visual was pretty incredible. You would look out across the fields and see the transition from brown to green.”

“Those pastures featured thigh- to waist-high grass,” Naumann added. “You can see photos of something like this or read about it in a textbook, and it’s what you expect. You just don’t get to see it very often. During the drought, we got a great look at how well the warm-season grasses can flourish through difficult conditions.” 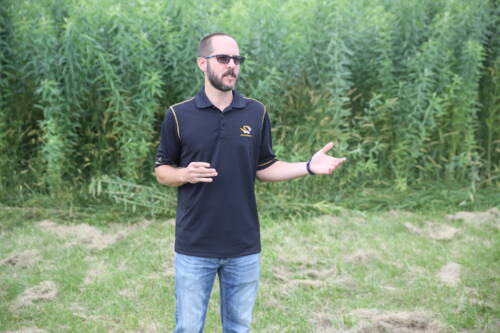 Davis said they use a mix of big bluestem and Indiangrass.

“Since all three mature at different times during the summer, if someone was managing the system closely, you could plan around their maturity rates,” Naumann said. “It would definitely take some work, but you could try to play with those three in a system.”

The Forage Systems Research Center continues to look at different options when it comes to warm-season grasses and how they can be used in grazing systems. With climate extremes happening and issues with fescue toxicosis, warm-season grasses could play an important role in the future, especially since those grasses are more water-use efficient, nitrogen-use efficient and offer benefits to wildlife from a habitat standpoint.

“Warm-season grasses are better adapted to coping with all of the extremes,” Davis said. “The Forage Systems Research Center is uniquely qualified to do this sort of work. With our history of grazing research, as well as the Grazing Schools, we’re very suited to continue to do this research and educate farmers.”

Naumann added that they are continuing to do research and build projects in hopes of bringing in more funding. It can be more difficult to find funding for long-term research studies, so being able to provide results is key.

“The groundwork is being laid,” Naumann said. “At the end of the day, we need to provide farmers with as many sound options as possible to be able to do more with less. They’re tasked with needing to produce more on the same number of acres that they’ve always had and at a lower cost. It makes sense for the Center to be at the heart of that.

“We’re working to collect data and show the benefits of why this work is so important.”