On April 10, 1978, Jon Schreffler drove up to the Thompson Research Center to begin his first day at his brand new, part-time job. The soon-to-be 19-year-old was offered a full-time position just five months later.

As the calendar turned to 2019, Schreffler began his 42nd year as an employee at the Thompson Research Center. He has served in a variety of capacities and roles during his tenure, including farm manager of the Center since 2010.

“When you’re young, responsibility helps you grow up,” Schreffler said. “I was just a kid when I started at Thompson, and I had kid habits. But as I got more involved, I was trusted with more and was depended on to accomplish certain tasks. That changed me. I was able to grow into each role. 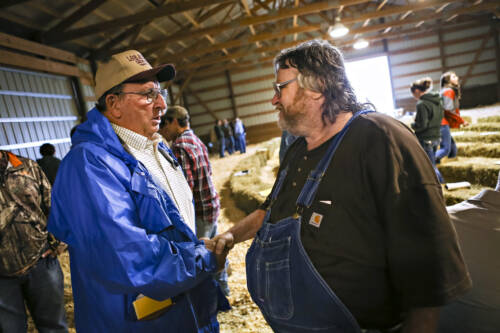 “I also think there’s a lot to being loyal. If you care about what you’re doing, you’ll take ownership of it. That was also preached to me and I’ve tried to live it out.”

Schreffler grew up on a farm and was familiar with the agriculture scene, so the work at Thompson was an easy transition. Schreffler even forwent his senior year of high school to begin his job at Thompson full-time.

“It was a dream job,” Schreffler said. “I fit right in. Working with cattle was all I ever knew – I honestly don’t remember my life without cows.”

The Thompson Research Center was established in 1955 through the will of Dr. George Drury, a retired dentist. The 1,600-acre Research Center focuses on beef cattle production systems and crops management. Animal projects evaluate the efficiency and economics of cow-calf management practices, steer/heifer backgrounding, and cattle finishing options. The mission of the Center is the development, evaluation and dissemination of technical information for beef herd management using multi-disciplinary approaches for Missouri and regional audiences. To accomplish the mission, research is focused on reproductive performance, heifer development, supplementation strategies and animal health factors.

Mizzou introduced beef cattle research at the Research Center in 1963. The first comprehensive cattle crossbreeding experiment at Thompson was conducted under the direction of John F. Lasley. The farm was also the site of a bull progeny testing program from 1970-1990, where approximately 100 bulls were tested yearly.

Schreffler not only had an opportunity to work cattle, he was able to hop on a tractor and take part in the plot work at the site.

“When you’re part time, you get to do what the low man on the totem pole doesn’t want to do anymore,” Schreffler said. “I enjoyed it, though. I learned a lot and made it my goal to continue to work my way up. It was a whole new world.”

Schreffler’s hard work continued to pay off as he was continually promoted at Thompson. He was the animal technician before the Center went through a few transitions. After some restructuring, Schreffler applied for the herdsman job and got it.

“I worked my way up the ladder,” Schreffler said. “I really did do everything there was to do at the Center.”

Schreffler became the herdsman at Thompson in 1993. A few years later, David Patterson made a trip to the Center. Patterson, a new state beef Extension specialist at MU at the time, had developed a replacement heifer program at the University of Kentucky a few years before. He wanted to implement a similar program at Mizzou.

“The first day Dr. Patterson came out here, it was a cold March day,” Schreffler said. “We had to get the calves in so that he could work them. I plowed a path in the snow so that the calves could get to the barn, but they wouldn’t stay on the path. They were in belly-deep snow. All I can think about was how all of my calves were going to die because of this new program. I wasn’t real hip on what we were doing.”

That program would soon be given an official name – the Missouri Show-Me-Select Replacement Heifer Program. Thompson would be a pilot site of the program.

“I was always a day late and a dollar short,” Schreffler said. “It took me a long time to understand what we were here for. The blood testing, checking the cow’s DNA – I didn’t think a producer would do that. We needed to be the ones taking the lead on the science part of equation, though. 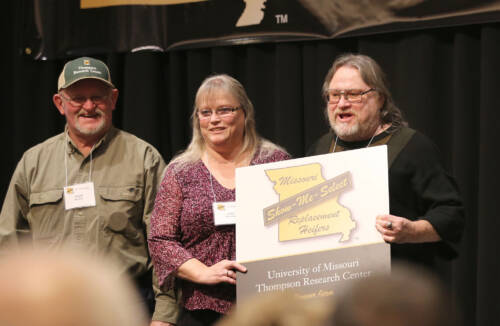 “Dr. Patterson saved this Center. Before he arrived, we just had cows. We were at the tail end of Dr. Lasley’s cross-breeding studies. We moved toward an Angus herd after that and we haven’t looked back.”

The Missouri Show-Me-Select Replacement Heifer Program has enrolled more than 135,000 heifers on more than 850 farms during its 20 years of existence. Along with Patterson, a number of specialists have made Thompson their prime site for research, including Jared Decker and Jordan Thomas.

“We’re fortunate to have a group who really care about the Center,” Schreffler said. “When you’re doing research out here, you join our family. I’ll always be loyal to Dr. Patterson and his team. They took us to the dance when no one else would. We’ve all bought in since then.”

“David is like a brother to me,” Schreffler said. “He’s just one of the people who have had and still have a huge influence in my life. Rod Geisert, who was the interim superintendent for a few years, was a great boss and a great friend. Virginia Clark, the only secretary ever stationed at the farm, was amazing to work with. Dave (Patterson) and Duane Dailey (professor emeritus of MU Extension education) – I can’t tell you how much they will always mean to me. I wouldn’t be here today without all of them.”

Schreffler continues to work with local producers, providing important research findings and offering information on what tools those producers can use to improve
their herd.

“This doesn’t happen overnight,” Schreffler said. “We make sure to share the good and the bad of everything we do. We’re in the business of helping people develop
better cattle. If they can convince me, and I’m pretty hardheaded, there has to be something to it. We’re here to take chances and solve problems before they become a problem for producers.

“I refuse to sell a heifer that I’m not proud of. It’s a thrill to get that call from someone who has faith in what we’re doing. We keep building on everything as well.”

Schreffler has no plans on slowing down, either, entering his 42nd year. With the support of his wife, Lola, who he grew up with and married in 1977, Schreffler is focused on bringing more research to the local farmers.

“The worst part of the job is the 18-mile drive,” Schreffler said. “If I could snap my fingers and be there, that would be a lot easier. This is my home. Some of biggest parts of my life have been spent on these 1,600 acres. I’m as comfortable here as I am anywhere else in the world, and I’m incredibly lucky to have a wife who has supported me in all of this. Farm life isn’t easy, and having a spouse who understands what it takes is rare. Lola has been by my side through it all.

“I’ve fought for this Center, stood by it and defended it. I keep saying that there’s one more thing I want to see happen here, and then another thing – and another. That makes it hard for me to retire and want to go fishing yet. I bleed Thompson Farm. They can scatter my ashes here for all I care.”