The Graves-Chapple Research Center was established in 1988… Expand ▸

The site is a prime example of how the missions of the University of Missouri College of Agriculture, Food and Natural Resources and MU Extension work together.

“Extension is well known for their guide sheets – and I like to call the Graves-Chapple Research Center a living guide sheet,” said Jim Crawford, superintendent of the Center. “CAFNR and Extension do things slightly differently, but we have the same goals at the end of the day.” 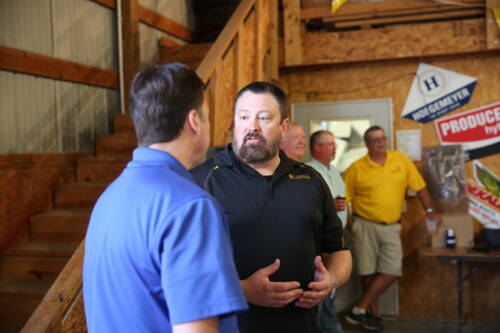 When the Graves-Chapple Research Center began, it was founded on providing localized information that supports regional producers.

“That’s how this Center started – we talked to producers about what they wanted,” said Wayne Flanary, an agronomy specialist in Holt County. “We wanted to deliver on what they were interested in learning more about. We’re here trying to help people. They want localized information, and we’re in a great spot to provide that.

“Once you have that trust, you want to keep it. We’ve worked hard to continue to evaluate the things that we’re doing. That way we can be truthful and provide the facts. We want to be completely unbiased. Producers appreciate it when we have their interests in mind.”

Graves-Chapple became a reality with a letter, written in the late 1980s, by a handful of agriculture agents located in northwest Missouri. The letter was addressed to then-CAFNR Dean Roger Mitchell and was written by Flanary; Bob Chapple, ag engineer; Mike Killingsworth, farm management specialist; and Don Mobley, livestock specialist. The focus of the letter was on the need for a research demonstration site in that corner of the state. Mitchell was in complete support of the idea. 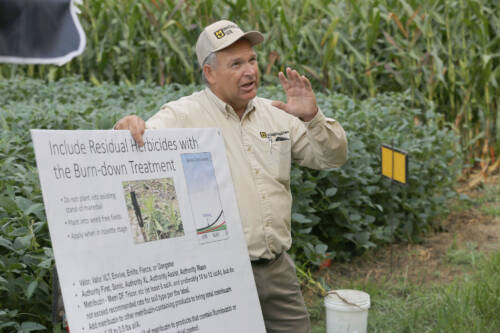 “We worked out of our pickups that first year,” Flanary said. “There were no buildings or facilities. It was just land. “It was just neat that Dean Mitchell thought enough to approve our vision. He would come up often and sent many letters of thank you to us. He was very interactive when he was on site.”

Crawford’s appointment is as a field specialist in agricultural engineering, making his appointment 100 percent Extension. That role also includes his duties as the superintendent of Graves-Chapple.

“It’s a unique situation for sure,” Crawford said. “It took me a bit to wade through everything, but I arrived at the thought that we’re all after the same thing. There is a lot of overlap between the two. I try to use one to feed the other. The Research Center is where we generate local information for our regional producers and farmers. The Center fuels numerous Extension programs, including soil and water management, horticulture, and cropping systems. We can take the information from those programs and use it in workshops and demonstrations.

“We have discussions during those events to get an idea of what our audience is interested in. When we get that information, we take it back to the Center and get to work. We do our best to keep a constant flow of information between the two so that both sides benefit.”

The relationship between CAFNR and Extension is incredibly visible during Graves-Chapple’s various events, which include field days, workshops and education days. Those events feature numerous Extension speakers and presenters.

“Using Extension faculty is an obvious extension of what MU does,” Crawford said. “Those faculty have local contacts and have built strong relationships with those individuals. Our audience trusts those faculty and they have built credibility through their hard work and expertise. For example, a producer can call Wayne Flanary and Wayne will be out at their property in 20 minutes. That means a lot.”

While Graves-Chapple hosts its annual field day each fall, there are a number of specialized field days and smaller workshops that have made the Center an important staple in the northwest part of Missouri.

“We’re not trying to sell anyone anything,” Crawford said. “We are dedicated to providing an unbiased source of research and information. People are just going to get the facts from us.

“We’re also focused on researching and demonstrating what’s important to our local producers. When there’s an important topic or issue affecting agriculture, we’re going to look into it.”