Work begins at 4 a.m. each day at the Foremost Dairy Research Center in Columbia – and it generally doesn’t end until 9 p.m.

Dairy cows need to be milked twice a day. Foremost Dairy is home to more than 400 Holstein and 40 Guernsey cows on 1,065 acres, just west of Columbia. That means
extra help is always needed. Farm Manager John Denbigh said Foremost Dairy has four full-time workers and relies on 8 to 12 student workers year-round. Those students are vital to the operation – and they gain valuable experience while working.

“We have to have workers here on weekends and during the holidays,” Denbigh said. “It’s not an 8 a.m. to 5 p.m. job. There are no days off. The students have the opportunity to do a lot of things while they’re here, and it can be really beneficial to them.”

Denbigh has been with Foremost Dairy for more than 30 years. He started as a herdsman and quickly moved to farm manager. He said a majority of the student helpers are interested in going to veterinary school. Many of the students have never dealt with dairy cows before, either. 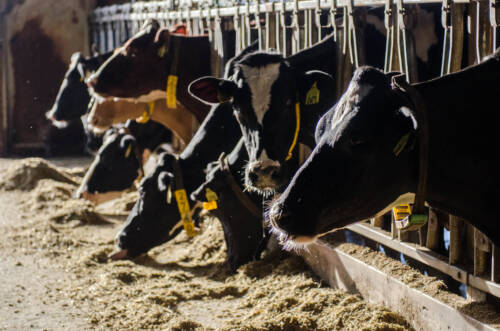 Matthew Burdick followed that exact path. Growing up in Kansas City, Burdick was interested in becoming a veterinarian when he came to the University of Missouri. He began working at Foremost in 2016 to get more hands-on experience with cattle.

“I was mainly looking to get large-animal experience,” Burdick said. “As I began working I realized I was really enjoying everything I was doing. I also realized that being a veterinarian wasn’t what I wanted to do. I wanted to interact with cattle in a different way.”

Denbigh has two full-time workers who milk each day and a student assistant who helps. Students generally start by feeding calves when they first begin working at Foremost Dairy. As the experience grows, the job responsibilities follow suit.

“It’s definitely just the basics when students start working here,” Burdick said. “After a year or so, I was involved with postpartum checks and monitoring herd health. As I’ve continued to work at Foremost, I’ve helped keep DNA records and played a role in the genetic work that takes place.”

Genetic work has become a staple at the Foremost Dairy Research Center. Students with more experience at the Center have been able to be a part of that process.

“I take the hair samples and send them off for our herd,” Burdick said. “It’s a fun part of the job – being able to see what calves score highest. Sometimes a calf surprises you and ends up with an extremely high score. I’ve learned a lot from that part of the job.” 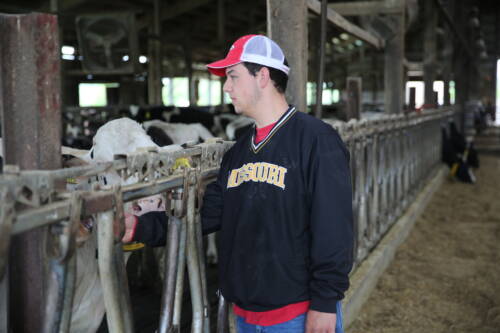 “I want the students to be familiar with the livestock and the terms we use with them,” Denbigh said. “To go along with that, I want them to understand how to use some of the equipment.”

Foremost Dairy is located just west of Columbia, toward Fayette. Foremost is focused on conducting research on how to maximize milk output and efficiency while maintaining the health of the herd.

“When you’re in class, you can read the book and study as much as you can – but nothing replaces actual hands-on experience,” Burdick said. “I’ve been able to apply what I’ve learned to real-life situations. There are also so many situations that happen that aren’t taught in class. The day-to-day work changes and you can’t predict it. That’s why an opportunity of this nature is so vital. It prepares students for the future.”

While operating the dairy is a full-time job, Foremost gives tours to several students and other groups. Denbigh said they usually have between 2,000 to 3,000 children stop by the dairy during the spring and summer months.

“We’re always happy to show people around the dairy,” he said.

While there is some turnover of students at the dairy, Denbigh continues to roll with the punches. He keeps the students on task and helps them gain valuable experience they will be able to use in the future.

“John is very knowledgeable and it’s been great to learn from him,” Burdick said. “He’s taught me a lot. I’ve really enjoyed my time here and have developed a passion for dairy nutrition. It’s been a great experience.”