Vicki Bryan, a coordinator for the Interdisciplinary Plant… Expand ▸

Vicki Bryan is a cat person.

A coordinator for the Interdisciplinary Plant Group at the University of Missouri, she also regularly fosters cats from the animal rescue group Second Chance here in Columbia. The role of a foster pet parent is to provide a temporary home for animals while they are waiting to be adopted, something Vicki began doing in November of 2017.

Since then, she has taken in 14 cats.

She first got involved with Second Chance by volunteering at their adoption center in Boonville, spending most of her Sunday mornings cleaning up and playing with the animals, each one with their own unique path that led them to the agency. Some of them had owners who developed medical conditions and could no longer take care of them. Some were brought in from other shelters with too many animals to take care of, instead of resorting to euthanasia, something Second Chance does not do apart from medical cases where it wouldn’t be “fair to the animal to allow them to be in pain anymore,” Vicki says.

After a while, Vicki realized she might be able to do more for them and decided to begin fostering. Specifically, cats that need more care than others.

There are certain animals that Second Chance brings in that don’t get along too well with other animals. “Some cats like to be ‘only cats,” Vicki says.

However, finding a temporary home where a cat can be the only animal in the house can prove to be a challenge. “It’s often hard to find fosters that don’t have animals of their own that they would have to interact with,” Vicki says.

These asocial cats are the kinds Vicki tends to look after. While she does have a cat of her own, she also has enough extra space in her house for any misanthropic felines to comfortably roam around without interacting with them.

But there are other cats brought into Second Chance that need more care than others, ones with certain medical needs or conditions. Sometimes these conditions come about as a result of declawing and having to undergo corrective procedures. Other times they may also require antibiotics or pain medications to be administered regularly.

Vicki looks after these cats as well. 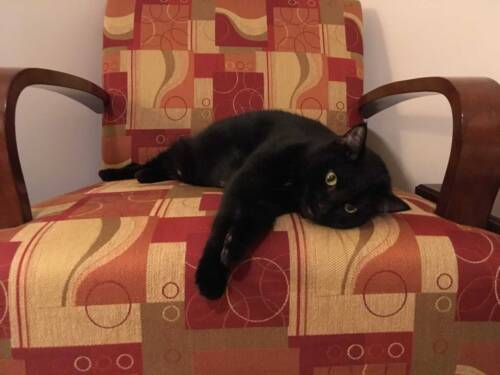 Because of their extra needs, she tends to have these fosters a bit longer than others. But while the process of finding a home always takes time, that time can vary greatly; her shortest turnaround time was only 48 hours. On the other hand, the longest it took to find a permanent home for a cat was almost 6 months, and was also for the first cat she fostered.

Her name was Orphie. Orphie was a black domestic shorthair who had been declawed, adopted and then returned due to physical pain issues, which she began to associate with her adopter. When she was put on the Second Chance adoption site, they got a response from an elderly man looking for a companion who wanted to create a home for her. It was a match that was especially perfect. Because the man was on blood thinners at the time, any cat he was to bring home needed to be declawed as even the tiniest scratch could prove disastrous for him. (Although Vicki assures that such scratches are not common).

However, as Orphie’s pain continued to increase, she was taken to get a procedure to help her, which required her to stay with Vicki for several more weeks to recover. At the same time, the man had to go into the hospital himself for several weeks. Once both were recovered and Orphie was put back up on the adoption site, she was finally able to move into her forever home and become a part of the man’s family. 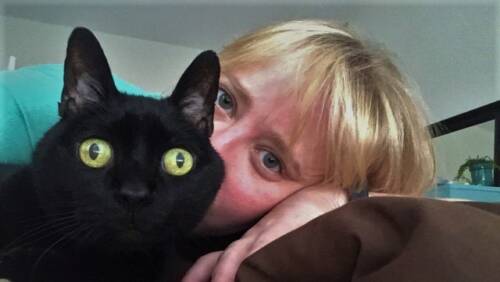 At the end of their time together, it was tough for Vicki to say goodbye. And while she’s gotten better at it, sometimes it’s just not possible. One of her cats, a black domestic shorthair named Bert, is what’s called a “foster-fail,” meaning an animal that the foster parent decides to keep permanently.

Second Chance is always looking for more people to volunteer and foster, and Vicki believes that just about anyone could take in a foster cat. “Cats are much easier to foster if you have jobs and can’t run home and check on them.”

Plus, the group also covers costs such as food and medical needs, and some toys. They also don’t require a whole lot of space. “For cats, if you basically even have just a spare bathroom, you can foster.”

Vicki is currently fostering Lili, who is surprisingly not a black cat. Before Lili,she had Katherine, a 2-year-old black domestic shorthair.

“I take in a lot of black cats,” Vicki says.