One August afternoon in 1930, 6-year-old Mel West and his family finished their chores early, put on their going-to-town clothes and hopped in their vehicle for the eight-mile drive to Golden City, Mo. West’s father had made homemade ice cream and his mother had made an angel food cake earlier that day for an ice cream social at the local United Methodist Church, with the church collecting funds to send to children in China. 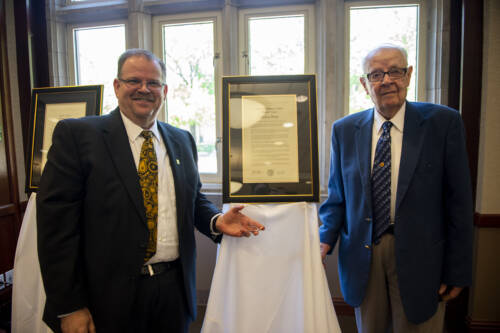 As West, his parents and his brother pulled up to the church, West’s father delivered the snacks, made some small talk and got back in the vehicle. West was confused. It was an ice cream social – why weren’t they eating ice cream?

“We were barely making it at the time,” West said. “It was the beginning of the Great Depression and times were definitely hard. We could barely afford the ice and sugar for the ice cream and cake – and I realized we definitely couldn’t afford to buy them back.

“That experience taught me so much, though. We didn’t have much, but we gave all we could. It was a powerful lesson.”

That lesson has led West on a long path of humanitarian work, including co-founding Mobility Worldwide, which has brought more than 78,000 wheeled carts to individuals who cannot walk, in more than 100 countries. West, who earned his bachelor’s degree in dairy husbandry from the University of Missouri College of Agriculture, Food and Natural Resources in 1947, recently received an honorary degree from MU for those humanitarian efforts.

“Everything that has happened to me would not have happened without MU,” West said. “If my wife, Barb, and I had not come here, I don’t know what type of life we would have had – but it wouldn’t have been this one.”

West had been retired for nearly 10 years when he founded Personal Energy Transportation (PET), also known as Mobility Worldwide, in 1994. The idea came from past discussions with a missionary from Zaire (now the Democratic Republic of the Congo) named Larry Hills. West had been sending containers full of sewing machines, typewriters, farm equipment and other useful tools to Hills for several years. The two had never met, however.

West and Hills were finally able to connect when Hills made a trip to Iowa to raise money for a return trip to Zaire.

“The cross is not meant to be an ornament or an expensive gadget on top of the church. The cross is a lifestyle. When there is a human need, and I can respond to that need, then I have the responsibility to respond. That’s been my theology all through what we’ve done.”
―Mel West

“Before Larry departed, he mentioned that there are so many people who don’t have legs that they can use, due to polio, snake bites and birth defects, among other reasons,” West said. “He needed a hand-cranked, three-wheel vehicle with hauling capacity so they could make a living. I told him I would go home and get to work.”

West partnered with longtime friend Earl Miner to create a prototype. After tinkering with a few designs, West sent four vehicles to Hills and told him to try them in the worst areas possible.

“This really taught me the difference between fun and joy,” West said. “People spend a lot of money and energy trying to have fun. When you realize that you’ve had a hand in getting people off the ground, that’s joy. When a bunch of volunteers gather to put together mobility carts for a weekend, you have a lot of fun. When you get to see the mobility carts in use, it’s joy.”

The carts are created completely through volunteer help. West has served as the director emeritus of Mobility Worldwide during the past few years, after heading the organization for several years. He’s still active, too, collecting plastic jugs that serve as shipping materials for the mobility carts.

“The cross is not meant to be an ornament or an expensive gadget on top of the church,” West said. “The cross is a lifestyle. When there is a human need, and I can respond to that need, then I have the responsibility to respond. That’s been my theology all through what we’ve done.”

West didn’t take many trips outside of Barton County growing up, but he did make a few treks to Columbia through Missouri FFA and 4-H. West grew up on a 400-acre dairy farm, so the University of Missouri was an easy choice when it came time to select a college.

“I grew up in a culture where it was expected of me to go to college – and I was motivated to do so,” West said. “I remember going into town once a week, and I would visit with my grandpa. If I hung around him long enough, he would ask me, ‘If I gave you two nickels, what would you do with them?’ I would always say, ‘I would save one and spend the other.’ Once I got my nickels, I would run down to First National Bank and slap one nickel on the counter, which I could hardly reach. The bank president would treat me like a millionaire. I had money in the bank and was saving for college.

“Mizzou was just kind of expected for ag boys and was considered to best place to go, so to Columbia I went.”

As West enrolled at MU and began his collegiate career, stressful times were right ahead. The United States entered World War II in late 1941. A year later, West enlisted in the Marine Corps.

“Our family had a tradition of serving our country,” West said. “I had been in ROTC, so that made me officer material. I was allowed to finish the year at MU and then went straight to Purdue University to take courses related to anti-aircraft and so forth.

“My name really saved my life. The A’s to middle S’s had to go to Iwo Jima. A bunch of my buddies are buried over there. I’m definitely blessed to be alive today.” 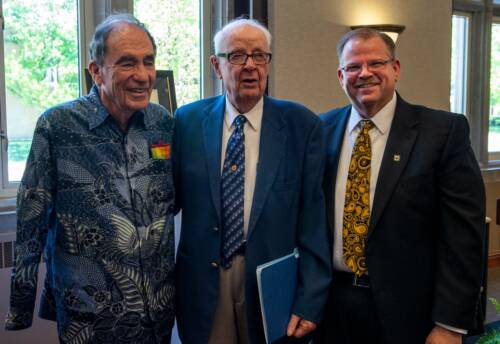 West served in the Marine Corps from 1942-46. He married Barb in 1945 and finished his degree at Mizzou in 1947. Barb graduated from the agriculture Extension program at MU during that time as well. The two moved to Carthage, Mo., after West’s graduation, taking over the dairy farm that belonged to West’s grandfather.

West and his wife were well known for their use of best farm practices with their herd. In 1955, the duo were selected for MU Extension’s Balanced Farming Days, where more than 6,000 people visited their farm to see balanced farming demonstrations.

It was during this time that West was also serving as the pastor of five rural churches – and got his first taste of humanitarian work.

“I grew up in church and rural churches are always in need of pastors,” West said. “I was running a Grade A dairy and pastoring five churches at once. Our cows were utterly confused when milking time was.”

A missionary set West on a more direct path toward humanitarian work.

“He told me that a lot of folks could milk cows. He thought my passion was needed in the ministry,” West said.

West loaded up his family after 11 years on the dairy farm and went to Dallas, Texas, where he earned multiple degrees from the Perkins School of Theology at Southern Methodist University. He served at a United Methodist Church in Dallas for six years before moving back to Missouri and developing and directing The Office of Creative Ministries. That office worked with 1,260 United Methodist Churches across the nation.

“I’ve always been active and able to handle a number of things at the same time,” West said. “I had a lot of freedom when I came back to Missouri, and I took it. I wanted to establish the office to enable and encourage local churches, especially rural churches, to be more widely engaged with mission work around the world. Those 20 years were incredible – where we were able to develop new projects and help people in so many ways.”

“Each experience in life prepares you for the next. I’m deeply honored to receive this honorary degree, especially because it’s for humanitarian work. It’s embarrassing the amount of publicity it’s bringing, but I’m happy to see our mission get more publicity. I don’t think I’ll stop until I absolutely have to.”
―Mel West

The mission projects were numerous during those 20 years, including the Missouri Heifer Project, Missouri Habitat for Humanity and the Prison PATCH Program, among many others. West helped develop three homes for abused women and children, began three new congregations, and directed more than 200 youth and adult work camps in the United States and abroad. West served on a number of international boards as well, before and after retirement. He played a major role in bringing Habitat for Humanity to Costa Rica, walking 1,000 miles in 50 days in 1987. West walked from Americus, Georgia, to Kansas City, Mo., and raised $70,000 to help found the Habitat for Humanity in Costa Rica.

West always made an effort to mix his expertise in agriculture with his passion for helping others, too. He taught military veterans agriculture for four years after earning his degree from Mizzou and continued to serve agriculture entities through his humanitarian work.

West and his wife have been a team in everything they’ve done. She has done her share of humanitarian work as well, helping inner-city children and selling handcrafted goods made by individuals in other countries.

“Each experience in life prepares you for the next,” West said. “I’m deeply honored to receive this honorary degree, especially because it’s for humanitarian work. It’s embarrassing the amount of publicity it’s bringing, but I’m happy to see our mission get more publicity. I don’t think I’ll stop until I absolutely have to.”