Robert J. Jones, chancellor of the University of Illinois at… Expand ▸

Robert J. Jones, chancellor of the University of Illinois at Urbana-Champaign, has an inspiring list of professional accomplishments over his years in higher education, first as a researcher and teacher, and now as a leader. 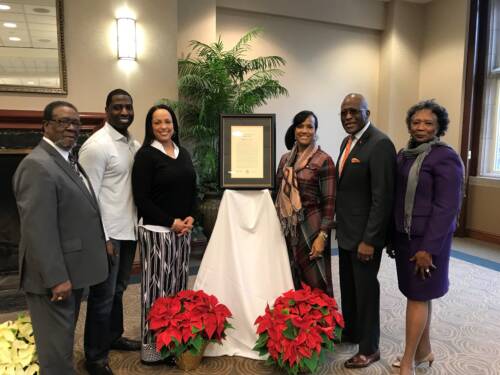 Still, he says the achievement of receiving an honorary degree from the University of Missouri last December was near the top of that list. Jones received his PhD from the College of Agriculture, Food and Natural Resources in crop physiology in 1978.

“I can tell you it was one of the highlights of my professional career,” he said of the honor, which also included speaking at the Honors Convocation. “I was nominated by the people who helped shape my life and career. It was very, very special to me and to the whole family.”

Jones said although he was accepted into doctoral programs at a few different institutions after receiving his master’s from the University of Georgia, Mizzou was the first to reach out to him and share which faculty member he would be working with if he chose to attend – C. Jerry Nelson. The opportunity to work with Nelson quickly sold Jones on coming to Columbia to pursue his PhD.

Nelson was named a Curators Professor of plant sciences in 1989 and is now professor emeritus. Before his retirement in 2002, he was president of the Crop Science Society of America, and helped found the International Crop Science Society, serving as its first president. He has continued to work on international programs to provide technical assistance for food security and production in Asia and Africa.

Working to help feed the world is what brought Jones to the field of crop physiology during his undergraduate years at Fort Valley State College (now University) in Georgia. He said he initially intended to pursue soil science, which was a signature program at the school.

“But then I took my first physiology course – it was junior or senior year,” he said. “I was hooked. Soils are living systems, but plants are living systems in a very dynamic way. What causes them to do what they do – providing the food and fiber necessary to feed the world.

“I was hooked on the notion of a career trying to better understand the physiological mechanisms and how they might be altered to help feed the world.”

While at Mizzou, Jones received the first George Washington Carver Fellowship from the College of Agriculture, Food and Natural Resources. Nelson nominated Jones for the award, which supports underrepresented scholars in doctoral programs in the college, and honors Carver, a native Missourian who gained international recognition in the early 20th century for his teaching and research in agriculture.

“It was the first time in my whole pursuit of higher education that I didn’t have to work,” Jones said. “First time I had time to just focus on studying – how profound that was!” 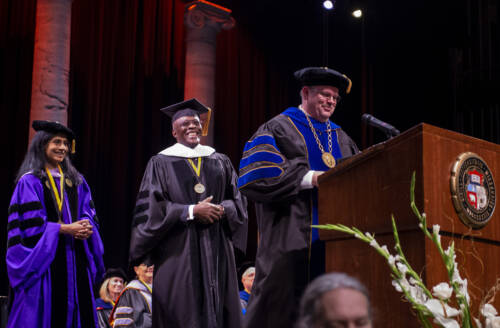 After receiving his PhD in 1978, Jones joined the University of Minnesota (from which he’d had a job offer since 1977) as an assistant professor, and spent the next 34 and half years of his career there. His research looked at the effect of heat stress on kernel development in corn – specifically, why the tip of a corn cob stops growing kernels under certain conditions. Jones’ lab was the first to document that this stunted growth was because of a hormone – heat triggers an enzyme that affects this hormone.

“We demonstrated this unequivocally,” he said. “It’s another thing I’m very, very proud of.”

Jones said his goal when joining Minnesota was to be the best professor and scientist he could be; he spent time building his lab and earning tenure. He “slowly” was drawn into administration over his time there, first serving as executive vice president/provost for student affairs (51 percent time; he still had a 49 percent research appointment).

“It wasn’t part of the plan,” he said of working in higher education administration. “The more I was asked to do, I did it well enough I was asked to do more. The turning point was that I got the same enjoyment out of doing administrative work that I got out of doing scholarly research. I got the same sense of satisfaction. I don’t do what I don’t enjoy.

“I closed my lab in 2010 in Minnesota as senior vice president of the system. I thought I had to let something go.”

He was first “pulled” into administrative work part-time, to help look at the university’s strategic plan, and then as part of a mentoring group for high-ability students of color.

Jones said his biggest accomplishments at the University of Minnesota were founding the Rochester campus, which has just celebrated its 10th year, and creating the Urban Research and Outreach-Engagement Center in north Minneapolis. In 2015, this center, the first of its kind in the country, was renamed in his honor.

“This center fosters engagement with the community to turn outreach into a different model of serving and solving issues the community says are important,” he said.

In 2013, Jones was named president of the University at Albany. There he launched the largest academic expansion in school history – creating the College of Engineering and Applied Sciences and the College of Emergency Preparedness, Homeland Security and Cybersecurity – the first in the country. 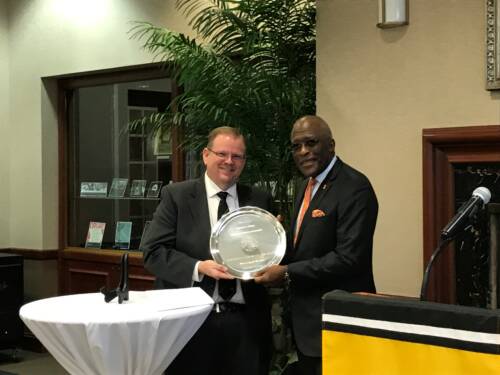 Jones, right, with University of Missouri Chancellor Alexander Cartwright at a ceremony in December 2018 recognizing Jones with an honorary Mizzou degree.

Three years ago he came back to the Midwest to take the helm as chancellor of the University of Illinois at Urbana-Champaign. He said he is proud of the initiatives he’s overseen to put an emphasis on affordability of college – like the Illinois Commitment, which provides free tuition for students who fall under a certain family income.

“We’re transforming the notion of affordability and accessibility,” he said.

In addition, the university raised more money last year than it ever had before.

“And we’re on target to equal or exceed that this year,” Jones said. In his time at Illinois, both the business school and the engineering school have received naming gifts – the latter is the largest gift ever given to a school of engineering in the country, he said.

Even with his proud accomplishments since, he still enjoys coming back to Columbia, a place that helped shape him. Jones regularly returned while he was still actively researching, to speak at plant physiology forums and other events. But until receiving the honorary degree, he hadn’t been back in years.