Thomas Spencer, a Curators Distinguished Professor in the Division of Animal Sciences in the College of Agriculture, Food and Natural Resources (CAFNR) at the University of Missouri, has been elected as a member of the National Academy of Sciences (NAS). Election to membership in the NAS is considered one of the highest honors a U.S. scientist can receive. 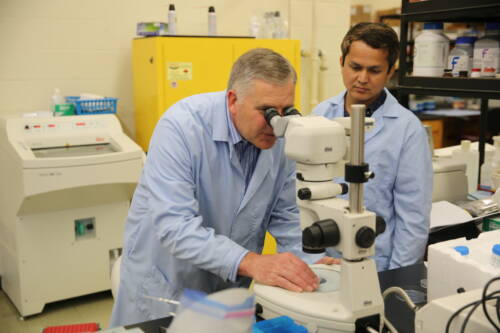 Spencer and his lab study the development and function of the uterus and placenta.

“This is a testament to the excellence of CAFNR faculty and our strength in animal sciences,” said Christopher Daubert, CAFNR vice chancellor and dean. “This is the highest honor given for science in our country.”

Spencer was notified of his selection just yesterday morning.

“I couldn’t believe it; I am pretty flabbergasted to be quite honest,” he said. “It’s unbelievable. I trained with a member of the National Academy of Sciences as a post-doc and have known members like Mike Roberts for many years. It’s something you aspire to but you’re never actually sure you’re going to achieve. National Academy membership is certainly an honor and an opportunity to promote science, not only at the local and state level but nationally and internationally.”

Spencer is internationally recognized for his research in reproductive and developmental biology, in which he studies the development and function of the uterus and placenta. The goal of his research is to define critical physiological and genetic pathways that regulate the establishment and maintenance of pregnancy and to solve grand challenges that affect the health of livestock, including infertility, pregnancy loss and diseases of abnormal uterine function and placental development. This work also has applications for the health of women, and Spencer has a joint appointment in the School of Medicine’s Department of Obstetrics, Gynecology and Women’s Health. 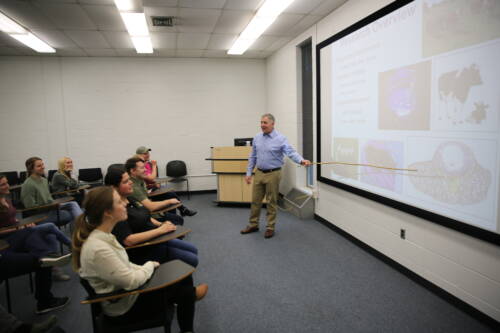 “Dr. Spencer has had a sustained record of achievement in reproductive biology as it relates to the animal sciences,” said R. Michael Roberts, a research collaborator with Spencer and Chancellor’s Professor of Animal Sciences, Joint Chancellor’s Professor of Biochemistry and a fellow member of the National Academy of Sciences. “He has a number of outstanding papers that he’s published over the years. He has made major discoveries regarding the role of the uterine environment in maintaining pregnancy, and specifically the importance of the uterine glands. And much of this is not just relevant to agriculture, but also to human biomedical sciences and fertility in women. He also shows strong leadership qualities and has brought credit to the university and to the Division of Animal Sciences in the four years he’s been here.”

Spencer joined CAFNR in 2015 from Washington State University, where he was the Baxter Endowed Chair in Research, professor of animal sciences and molecular biosciences, and associate director of the Center for Reproductive Biology. Spencer received the 2018 Distinguished Researcher Award from CAFNR. He has received more than $20 million in grant support from the United States Department of Agriculture National Institute of Food and Agriculture (USDA NIFA) and the National Institutes of Health (NIH).

“We are thrilled to learn of Tom Spencer’s election to the National Academy of Sciences,” said Bill Lamberson, director of the Division of Animal Sciences. “This brings very well-deserved recognition to Tom; the Interdisciplinary Reproduction and Health Group; the Division of Animal Sciences; the College of Agriculture, Food and Natural Resources; and MU. Tom has had a tremendous impact on our program. He has brought great research productivity, leadership, visibility and an expectation of excellence that have all benefitted our program.”

Spencer was named a 2017 Fellow of the American Association for the Advancement of Science (AAAS), and a 2018 Curators Distinguished Professor, Mizzou’s highest and most prestigious rank. 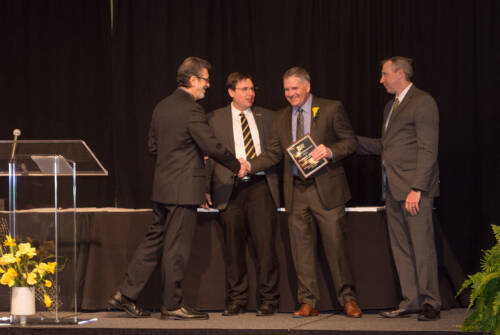 Spencer received the Distinguished Researcher Award from CAFNR at the 2018 Celebration of Excellence awards ceremony.

Spencer is the program director of the Interdisciplinary Reproduction and Health Group (IRHG), one of CAFNR’s Programs of Distinction. IRHG was organized and established through a faculty-driven, grassroots effort in 2016 to develop a multidisciplinary program to foster distinction in reproduction, health research and education at Mizzou. The primary goal of the IRHG is to address broad challenges to reproduction and health of humans and animals by conducting basic, clinical and translational research and providing training for the next generation of scientists. At present, IRHG includes more than 100 faculty, staff and trainees (graduate students and postdoctoral fellows) from eight departments across five colleges/schools at MU.

He received his doctorate from Texas A&M University in physiology of reproduction, and his bachelor’s and master’s degrees from Auburn University in animal and dairy sciences.