It was 1979 when Missouri farm kid Brett Begemann anxiously started his freshman year at Mizzou.

Growing up on his family’s farm near Mayview, Missouri, Begemann came to MU with the intention of returning to the farm. He described himself as “just a farm kid back then” and remembers thinking how big the city of Columbia was, which led him to wonder how he would ever make it in such a big city. Little did he know that he would see much bigger cities in his future.

Due to a drought, Begemann didn’t return the family farm after graduating from MU in 1983 with a degree in agricultural economics; instead, he went to work for Monsanto as a sales representative in Minnesota following a college internship he had with the company. During his 35 years with Monsanto, Begemann held several leadership positions, working in a variety of roles in sales, marketing and commercial development, as well as general management positions both in the U.S. and internationally. Now, he serves as chief operating officer for the Crop Science division of Bayer. Before this role, he was the president and chief operating officer for Monsanto Company.

On April 16, Begemann visited the MU campus as CAFNR’s Robert O. Reich Professor-for-a-Day. The program brings industry leaders to the college to share knowledge and experiences with students, faculty and staff. During his visit, Begemann spoke to students in CAFNR to provide insight gained throughout his career.

Begemann offered the students some guidance for their time on campus. 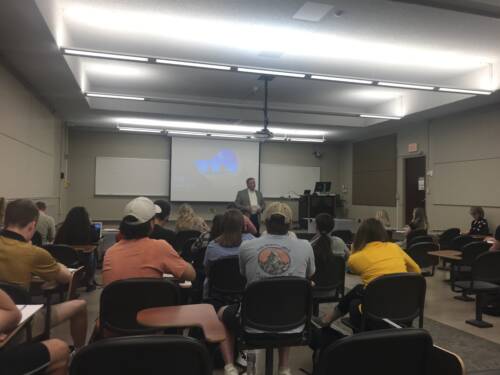 Begemann offers advice to CAFNR students while on campus April 16.

Begemann said there were many reasons why he thought it was important to come back to MU as Professor-for-a-Day. He said he hopes to spark curiosity in agriculture and its future because the industry needs talent.

“But personally, and more importantly, I owe something to the people that are coming through now because people helped me when I was coming through so it’s a bit of a giveback,” Begemann said.

He said the fantastic education that he received from CAFNR aided him in his career success.

“CAFNR creates an opportunity to build a network of people in agriculture and outside of it, too,” Begemann said. “The student body is big enough here that you could touch all of society, and they [CAFNR] never excluded you from that; they encouraged you in CAFNR to engage.”

During his time on campus, Begemann was involved in Ag Econ Club, served on CAFNR’s Student Council and was a member of Alpha Gamma Sigma fraternity.

“Don’t ever let your curiosity get stale.”