Sage Eichenburch grew up in downtown Prairie Home, Missouri, a small town where he could see a cornfield from the backdoor of his home.

Sage, a sophomore studying agriculture with an emphasis in sustainable agriculture, was one of four Mizzou students awarded a $1,000 Hesburgh Award for Student Academic Achievement for 2019. One student from each of the undergraduate classes is selected for the award each year. Sage was selected as the sophomore class’s winner.

“The scholarship money will really help because I will really be able to focus more on studies and growing as a student, and not have to worry quite so much about financing my education,” Sage said.

To apply for the scholarship, Sage wrote an essay over his most meaningful academic experience and submitted a recommendation letter. In his essay, Sage wrote about an environmental horticulture class he took last semester. 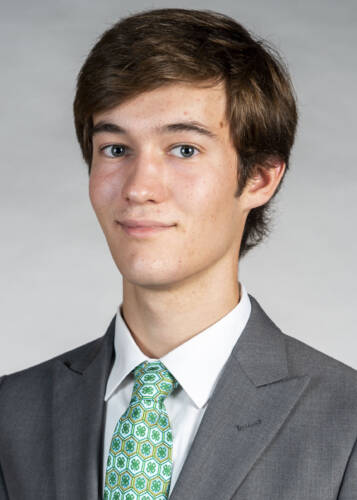 “I learned a lot and it really helped me to learn how to learn,” Sage said. “It was a really engaging class that kind of opened my eyes to plant sciences and an interest there that I didn’t think I had before that.”

Sage joined Clover Kids, a 4-H program for children under the age of 8, when he was 5 years old and later joined 4-H at age 8. As Sage got older, he developed an interest in community service and the citizenship aspects of 4-H.

“Our club would do a lot of stuff helping out at our local fair and I think that’s where I really started to get into 4-H because that’s where I could really see that I was making a direct impact,” Sage said. “It wasn’t just raising funds or collecting food and donating it somewhere; we were doing hands-on stuff and I could see that it was making an impact on the community, so that’s when I really started to enjoy it.”

Sage said his involvement in 4-H pushed him to study agriculture at MU.

“I’ve always enjoyed community service and helping make the world a better place,” Sage said. “While I was at National 4-H Congress, I got the chance to hear from 4-Hers from all around the country and talk to them. It kind of opened my eyes to this [agriculture] as a career of interest for me.”

Eichenburch has been visiting MU’s campus for as long as he can remember since his mom works for Mizzou.

“I’ve really come to love it here,” Sage said. “With 4-H, I’ve had the chance to tour campus and see some different aspects of it and be involved in a lot of the stuff CAFNR does. So that really helped influence the decision to come to Mizzou.”

Eichenburch is not certain of his post-graduation plans, but said he is leaning towards becoming an Extension agent because it would allow him to do hands-on work and communicate with others.