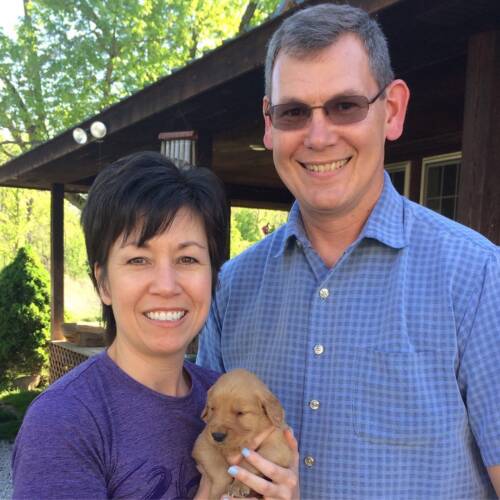 Ella, in many ways, is just like any other 2-year-old golden retriever. She loves attention, going on walks and spending time with her family. But there is one thing that separates her from the pack of other lovable canines and that is her sizable Instagram following. Ella, or @ella.m.thegoldengirl, has amassed a considerable number of followers online. One of her owners, Mike Sykuta, is an associate professor in the agribusiness program who has been at Mizzou for 20 years.

While he and his wife, Debbie, had owned a dog before, Mike admits he was not thrilled by the idea of getting another. “Dogs are a pain in the butt,” he says. “I love dogs, I don’t love being a dog owner.” Eventually, however, his wife and kids were able to talk him into it. So when a breeder in Boonville called “Big Muddy Golden Retrievers” had two litters within nine days (totaling out to an even 20 puppies), the couple put down a deposit, not knowing which one they would eventually bring home.

When the time came to pick one, Mike was the one who made the decision.

“She was the one making the least noise,” he says.

After staying at the breeder for 10 weeks, they were finally able to bring Ella home on June 4, 2017. But while Mike was the one who picked Ella from the litter, someone else thought to put her online. Mike and Debbie’s daughter, who was away at college, had been following several different Instagram accounts dedicated to dogs simply for “the warm fuzzy feelings,” Mike says. After finally getting Ella home, she suggested the idea of setting up their own account for Ella to her mother, who liked the idea. Once it was up and running, Ella’s followers began to grow rapidly. After two years of posting photos, making connections, and building relationships on the platform, Ella’s follower count is nearly 23,000. 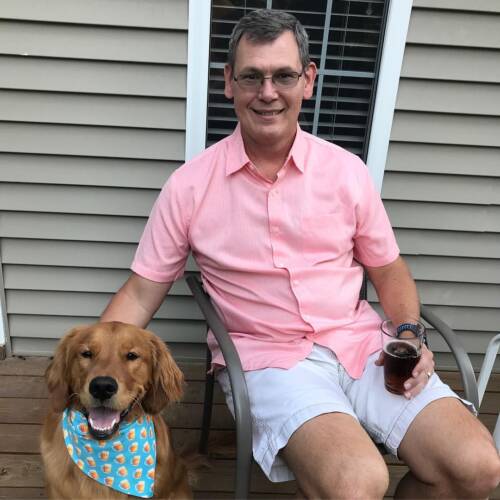 Surprisingly, Ella is not actually the one doing the postings or writing the captions. That responsibility lies mostly on Debbie who mainly runs the account, posting content to the page once or twice every day. While sometimes the photos are staged in advance for certain events and holidays, other times they come about on the spur of the moment as they go for walks or play in the park. But no matter the situation, Ella is ready to pose, and she’s quite good at it too.

“She lets us put things on her head,” Mike says.

But there are more benefits to be had in the dog social media world than just having a large number of fans. After gaining 5,000 followers, Ella started to get noticed by brands. “Ella is a model for several pet vendors,” Mike says, meaning that on top of her regular photos featuring brief glimpses into her day-to-day life, there are also posts where she advertises certain products like bandanas, leashes, collars and dog treats. Pet companies who make the products, especially smaller start-ups, use Instagram and reach out to accounts that have a sizable fan base like Ella’s to promote them. Other vendors will simply send samples of their products and ask in return for them only to post online if they happen to like it.

“There are some days or some weeks where Ella gets more mail than anybody else in the house,” Mike says. Some of the mail the household now receives also includes gifts from fans, as well as a “secret admirer” gift this past Valentine’s Day.

“There’s an industry built up for these pet owners,” Mike says, and it’s an industry that has also allowed for Mike and Debbie to create friends around the country through their famous dog. Not long ago the two traveled to Massachusetts to watch as their son competed in the Boston Marathon, and, while in town, they met up with Mochi and Kiwi, two golden retrievers with their own massive fan base of over 50,000 followers on Instagram.

Being well-tempermented does not just lend itself to being a good Instagram model. Debbie knew long before Ella came into their lives that she wanted their second dog to be a service dog of some kind. She saw firsthand the effect therapy dogs can have while her father was in a nursing home and his dogs were brought to visit. “She would see how not just him but everybody in the nursing home would get all excited to see the puppies,” Mike says.

On top of already being familiar with the breed, as their previous dog had been a Golden mix, it is the good temperament of the golden retriever that makes them good therapy dogs and made them bring Ella home in the first place.

So as soon as the family brought her home they wasted no time and began training her for the test necessary to become a service animal. The group she works with only does therapy dog testing twice a year, so for the past 22 months, Ella has been going to school to get ready for the big day. 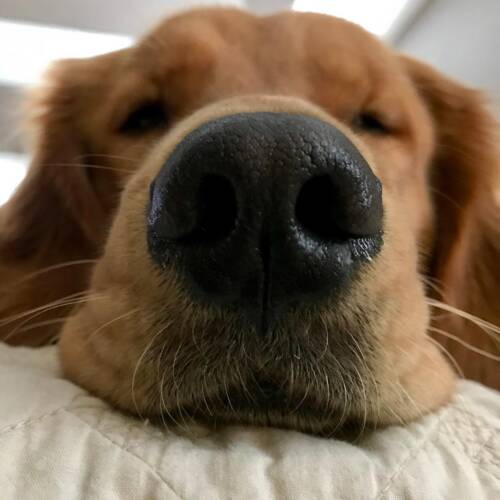 However, despite killing it at the Instagram game, her work as a therapy-dog-in-training has not always been perfect. While some days she does great, other days she really likes to just be playful. Spring break also proved to be a setback for the influencer. Like many non-dogs, taking a week off of studying caused her to forget a few things.

A lot of the training that goes into becoming a therapy dog is basic obedience. Learning things like not jumping at sudden noises and not licking and picking up things that are on the floor (if pills are spilled in a hospital you wouldn’t want a dog to lap them up). While another part of the training is just about maintaining composure. For example, not getting scared when a large crowd rushes at them.

Another important area of training is also one that Ella had particular trouble with: reacting to loud and sudden noises. In training, to get the dogs used to such things, the instructors put chains inside an old metal can and drop it across the room. At home, Mike and the family used their own method to desensitize Ella, turning on their vacuum cleaners more than usual.

There are other things she needed to get used to like crutches and people using walkers to get around, things that, at first, she was very afraid of. So to help her with this, the Sykuta family brought crutches and walkers home with them and kept them around the house.

At the end of the day, when she’s not training or posing for photos, what Ella really loves more than anything is simple love and attention. Particularly, being cuddled. Recently while Mike was watching TV one night, she did something she had never done before: hop up to lay down in his lap.

On Sunday, April 7, Ella took her therapy dog test and passed “with flying colors,” Mike says. Her first event will be Sunday, May 12, at Ellis Library. Yet despite her new job, she also will continue in her career as a social media influencer. And as Mike points out, the two are more similar than one may think.

“In some sense it’s just an extension of the therapy dog thing. The whole idea of doing that is so that she can make other people feel good.”