Last winter, students, faculty, staff and journalists all walked out of classrooms and office buildings to look at the cow walking through Francis Quadrangle. The cow, named Amelia, was being led by then senior Massimo Montalbano, dressed in a cap and gown.

If it were up to him, the Animal Sciences major would never have been there in the first place. While Massimo had no interest in getting graduation photos taken, his girlfriend, Monica Witzke, held a different opinion and was eventually able to change Massimo’s view on the subject. But after finally agreeing to the photoshoot, he still wanted his photos to be a bit more special, and had an idea that could make that happen. Although, as he points out, it was an idea that’s not entirely unique.

He had heard stories of graduating students in the past who had brought livestock to pose with. “One girl brought a horse; people brought cows before,” he says. But the idea appealed to him nonetheless, and after getting approval from Animal Sciences professor and Vice Provost for Undergraduate Studies Jim Spain, he was ready to go.

Massimo says not everyone in his social circle was totally on board with the idea. “My family thought it was weird,” he says. Originally from Chicago, Massimo does not come from an agricultural background and had little experience with farm animals of any kind growing up. Yet, since he was child, Massimo knew he wanted to work with livestock, and after getting experience working at a dairy, realized he loved working with cows in particular. Partially just for the challenge, but also because they are not quite like other livestock.

Massimo says each cow “has their own personality.” While some cows are as eager to approach new faces as a Labrador Retriever, others are a bit more chill. Amelia, Massimo says, falls into the latter category, which made her adept to handle the attention and social interaction she received as she was paraded around the quad. Plus, having competed in various shows over the years and even winning a few awards along the way, she also got the gig just because she’s beautiful.

But it was not just her looks and winning personality that made Massimo choose her for the shoot on that chilly December afternoon. In fact, Massimo and Amelia go way back. Amelia is owned by Mizzou. Specifically, the Foremost Dairy Research Center, the mostly student-run facility whose work, according to their website, “improves the health of dairy herds and the quality of their milk.” Amelia was born during Massimo’s first year at the Center, and over the next three years as continued his work there, he watched as she grew. 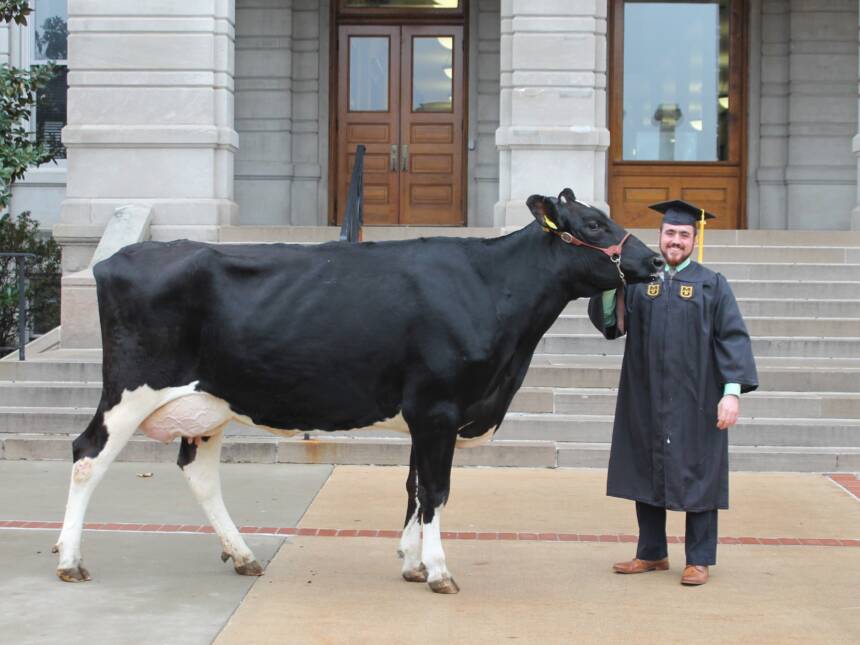 As it turns out, the biggest challenge of leading a nearly 2,000-pound show cow around a busy college campus is the people. On the day of the photoshoot, after giving Amelia a bath (“which she hated”) and getting a few shots by himself, Massimo was stopped by passersbys, including a reporter for The Missourian who interviewed him on the spot for a story.

“I expected people to take pictures but not like this,” he says. However, the mass of onlookers remained respectful to him and the cow, and while Amelia got a little restless by the end of the day, no issues arose

The Missourian was not the only one who wanted to share Massimo and Amelia’s story, as it was also picked up by organizations like KOMU and The Kansas City Star, as well as the Associated Press, which brought it to sites like The Hill, Yahoo News, the Montreal Gazette, and Fox News.

With graduation long behind him, Massimo now works for the New Zealand-based Grassland Dairy at one of their 15 farms in Missouri. As there are only two other full-time employees and over 400 cows to care for, the job requires long hours and a good deal of exertion. But for Massimo, the reward he gets from working with cows is worth the challenge, however many difficulties the job may bring.

“I just love doing it,” he says. “No specific reason. I just love it.”