Donnie Hubble grew up just 30 minutes away from the Greenley Research Center – and he was recently selected to serve as the Center’s superintendent.

Hubble officially joined the Greenley Research Center, one of the University of Missouri College of Agriculture, Food and Natural Resources’ (CAFNR) Agricultural Research Centers, on April 1. Hubble follows Dana Harder, who served as superintendent for four years, from 2014 to 2018.

Hubble joins CAFNR after more than 30 years at MFA Incorporated. He grew up in La Belle, Mo.

“My dad managed the MFA store in La Belle when I was in high school,” Hubble said. “I got started there in high school, helping with some of the more labor intensive work, like handling the various seed bags. When I graduated high school, I had a full-time position waiting for me.” 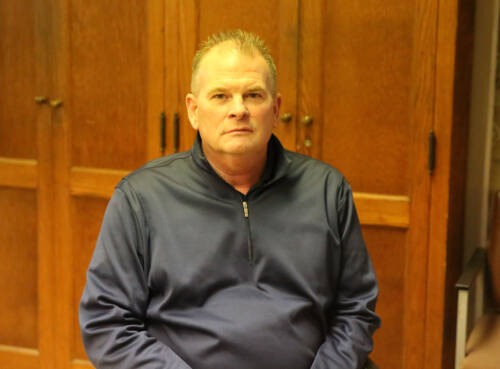 Hubble attended Highland High School in Ewing, Mo. He ran the grain elevator at the La Belle MFA location right out of high school, eventually working at the Palmyra location when the chemical warehouse moved from La Belle to Palmyra. Hubble managed the warehouse for five years before returning to La Belle to manage the MFA store there.

The Greenley Research Center was established when Hortense Greenley donated the 700-acre farm to MU. The major objective of the Center is to evaluate efficient, profitable crop production in northern Missouri while emphasizing soil conservation, water quality and energy efficiency. Researchers study the benefits of reduced tillage, alternative cropping practices, the effects of new technology and products, variety testing, soil fertility, and beef cattle backgrounding. Studies on water quality and the environmental impact of crop production are being implemented.

One key project the Center is widely recognized for is the MU Drainage and Sub-Irrigation (MUDS) research, established at the Ross Jones Farm in 2001. This system allows for the evaluation of a corn/soybean crop rotation with drainage and sub-irrigation on claypan soil, which is prevalent across Northern Missouri. Research agronomist Kelly Nelson leads the MUDS research, as well as several other projects at the Center.

“The people at Greenley are great,” Hubble said. “I had talked with Kelly a little bit while I was with MFA, so I’ve known about his work and strong reputation.

“After spending 33 years in one place, it’s definitely tough to leave. Getting to know the staff and seeing how great they are has made the transition easier.”

Hubble is currently getting acclimated to the Greenley Research Center and preparing for the various projects and upcoming events.

“I like a challenge,” Hubble said. “I can’t wait until it warms up and we can get in the field. I’m excited to get out and move around the farm.”

“We’re excited to welcome Donnie to CAFNR and add him to our team of superintendents,” said Tim Reinbott, assistant director, Agricultural Experiment Station. “The Greenley Research Center does incredibly important work related to irrigation and sub-irrigation, and is a critical part of our Research Center system. Donnie is going to bring great experiences to the superintendent position.”