Economists with the Food and Agricultural Policy Research… Expand ▸

Pressure on farm finances appears likely to continue according to the latest analysis of national and global agricultural trends from the University of Missouri. While the analysis shows a projected net farm income increase in 2019, farm income remains below the average of 2014-17. Longer-term projections suggest little change in real net farm income over the next decade, resulting in continued increases in the farm sector’s debt-to-asset ratio.

“The models we use have been developed over the last 35 years,” said FAPRI Director Patrick Westhoff. “The models are extremely important, but they don’t mean anything if you don’t have the proper analyst. We have amazing analysts here who have been here for quite a while now. They’ve developed some expertise on a lot of important topics.” 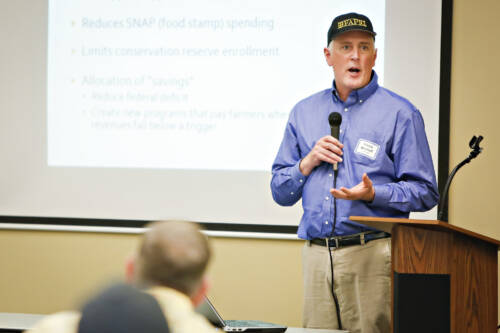 FAPRI’s analysis shows that projected prices for U.S. soybeans and other products affected by current trade disputes remain below levels that would prevail if foreign tariffs were removed. The projected average 2019-20 prices of soybean, corn and wheat do show slight increases from 2018-19, with soybeans at $8.78 per bushel, corn at $3.81 per bushel and wheat at $5.31 per bushel. Further recovery in wheat prices could be limited by continued large global supplies, while cotton prices could fall in 2019-20 in response to increased U.S. production.

Westhoff added that part of the reason crop prices are lower is due to recent growing conditions. He said the past six years have featured relatively solid growing conditions worldwide, leading to large crop supplies.

Increasing U.S. meat supplies continue to weigh on livestock and poultry prices in 2019. The possible impacts of African swine fever in China and other countries have pushed up pork futures prices since the estimates were prepared.

Under the 2018 Farm Bill, more corn, soybean and wheat producers are projected to choose the price loss coverage (PLC) program when they have a chance to make new program elections in 2019. Projected PLC payments total an average of $5 billion per year over the next decade, with other commodity programs adding another $1 billion per year in payments.

The U.S. Baseline Outlook is prepared annually by economists with FAPRI and AMAP and is updated each August. Westhoff said the report gives policymakers, farmers, agribusinesses and the public an overview of the state of the U.S. farm economy. The market projections it contains can be useful to farmers making production choices, to policymakers trying to decide how to respond to agriculture issues, to lenders who must decide whether to make loans and to agribusinesses making investment decisions.

“The information is meant to serve a variety of purposes,” Westhoff said. “It’s a broad-brush, big picture look at agriculture. Our goal is to give a general view of what the next 10 years look like.”

The full U.S. Baseline Outlook is available on FAPRI’s website.