Spread throughout Blake Hurst’s home near Tarkio, Missouri, are newspapers, magazines and books.

To read, and read, and then read some more was part of the advice Hurst gave students while on campus from April 3-4 as CAFNR’s Robert O. Reich Executive-in-Residence. The program brings industry leaders to the college to share knowledge and experience with students, faculty and staff. During his visit, Blake, the president of Missouri Farm Bureau, spoke to students in CAFNR, providing insight gained throughout his career.

“It’s such a cliché, but it’s true, all you can do here [at MU] is to hopefully get kind of a base for learning. You have to keep learning every day, or else you will get behind,” he said.

Missouri Farm Bureau is a grassroots organization that magnifies the voices of Missouri farm and ranch families, representing their members at legislatures in Jefferson City, Missouri, and Washington, D.C. 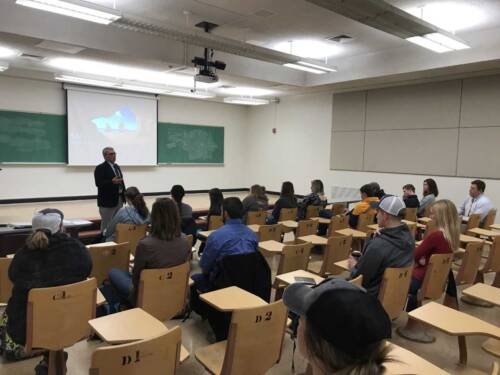 “I really was happy to receive the invitation [to come back to CAFNR as an Executive-in-Residence] and I hope that students get a little bit out of it,” Hurst said. “For me though, it’s really good to talk to young people and just see what’s on their mind and what questions they ask.”

Hurst graduated from MU in 1978 with a degree in agricultural economics.

“I wanted to do agriculture, that was my interest,” he said. “But the business part of agriculture has always been more interesting to me than the plants and animals.”

Hurst said some of his favorite memories from his time at MU were the ones he made with his wife, Julie.

When he’s not busy advocating for the rural way of life as Missouri Farm Bureau president, Blake spends his time farming corn and soybeans with his dad, two brothers, three nephews and two sons-in-law and running a wholesale greenhouse business with his wife, Julie.