While not a traditional farm kid, Christine Tew got involved in 4-H at an early age and later joined the National FFA Organization as a middle school student. Those positive experiences have led to a career in agriculture communication. 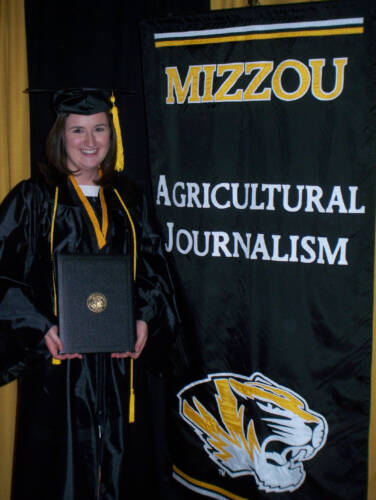 “The award was an incredible surprise and an incredible compliment,” said Tew, who earned her bachelor’s degree in agricultural journalism (2008) and her master’s degree in parks, recreation and tourism (2010) from MU. “Seeing so many of my former mentors and individuals I’ve been able to mentor; I can really think of only one word – incredible.”

Growing up, Tew was much more likely to become a Florida Gator than a Mizzou Tiger. Tew and her family lived in Florida, and Tew’s father earned his degree from the University of Florida. They moved to Missouri when Tew was in high school, with Tew graduating from Thomas W. Kelly High School, in Benton.

It was at Kelly High School where Tew developed a passion for agriculture through the National FFA Organization and a passion for communication through work on the yearbook staff.

“The positive experiences I had in 4-H and FFA, coupled with a great experience on the high school yearbook staff, led me to look at a degree program that blended the two,” Tew said. “That’s where I found agricultural journalism at the University of Missouri.”

Tew had the opportunity to do research, teaching and communication work while at Mizzou. She was incredibly active with the College of Agriculture, Food and Natural Resources, including serving as a communication specialist for the School of Natural Resources for five years. During that time, she produced an annual alumni magazine, developed and executed alumni events, and edited scholarly research manuscripts.

Tew also joined Collegiate 4-H and Collegiate FFA. She was a member of the CAFNR Student Council and the Student Parks and Recreation Association as well.

“I really enjoyed my time and experiences at MU,” Tew said. “I had an awesome undergraduate experience, and I was able to be part of a master’s program that blended so many things that I enjoyed.”

Tew worked with Carla Barbieri, an assistant professor in Parks, Recreation and Tourism at the time. Tew studied agritourism and was Barbieri’s first graduate student. The project was at the intersection of marketing, promotion, agriculture and education – all of which interested Tew.

“I was really incredibly fortunate to be in the right place at the right time and with the right people during my time at MU,” Tew said. “My sophomore year, I had a friend who forwarded me an announcement for a student assistant position in the School of Natural Resources. I interviewed thinking there was no way that I had the qualifications for the role. They must have thought more of my abilities than I did. They took a chance with me and allowed me to do some really cool projects. They also let me grow the role as my skills developed.

“The experiences I had during my time as a student in CAFNR taught me the importance of relationships and relying on your network. You have to invest in your relationships. Get to know the staff and the faculty. When you have to opportunity to visit with alumni, make the most of it. Ask questions and truly get to know them. Don’t be afraid to follow up, either.” 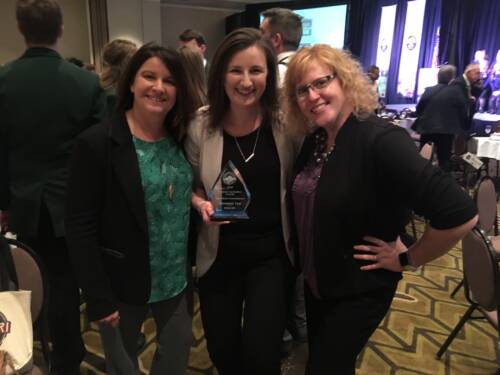 After finishing her master’s degree at Mizzou, Tew joined the team at the Missouri Department of Agriculture, ultimately serving as communications director. About four years later, she moved on to serve as the director of communications and public relations for the Missouri Soybean Association.

“I have had, and continue to have, so many great mentors who can be objective about my skillset and recommend where I’ll be likely to succeed,” Tew said. “They’re also frank with me about what I need to work on. I owe them so much for helping me get to where I am.”

“I wish I could have put everyone at one table, obviously,” Tew said. “I chose Diane and Becky because their actions had a massive impact on my career. Diane was my first boss in the agriculture industry when she hired me as an intern while I was an undergraduate student. Becky noticed me as a volunteer at numerous events. When I was job hunting, she put in a good word for me with the Missouri Department of Agriculture. When the Missouri Soybean Association job opened up, Becky spoke up with my name as well.”

Tew has been involved in numerous professional organizations and continues to be active with CAFNR and Mizzou.

“I definitely don’t feel like I would have had the opportunities I’ve had if it weren’t for the Mizzou network and the CAFNR family,” Tew said. “Those relationships make me so grateful and motivate me to find ways to help others in the same way. When I’m working with youth organizations, interns and students, I want to do my best to help those folks be successful down the road. I want to lift those individuals up. I met some great people along the way. I want to be one of those individuals for someone else.”