“I am so pleased to have Drs. Market and Wilhelm Stanis in these important leadership positions for the School of Natural Resources,” said CAFNR Vice Chancellor and Dean Christopher Daubert. “They both have spent their careers with the University of Missouri, have experience in program coordination, and are excellent student mentors and teachers, and accomplished researchers.”

Market and Wilhelm Stanis are both part of a $20 million National Science Foundation EPSCoR grant, Missouri Transect: Plants, Climate and Community. Market serves as Climate Team Leader for the project. Wilhelm Stanis is part of the Community Team. The project incorporates researchers from 10 Missouri institutions. 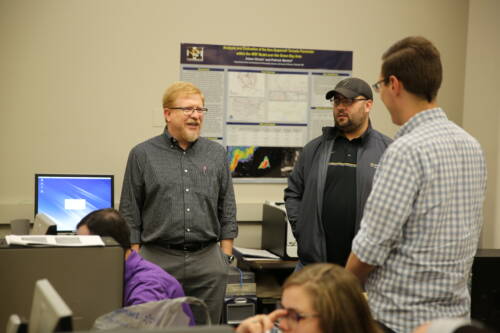 Market, pictured at left with students, has been part of CAFNR since 1999, when he joined as an assistant professor of atmospheric science, after receiving his Ph.D. from Saint Louis University in meteorology. He was promoted to associate professor in 2005, and made full professor in 2013. He previously served as the chair of the Department of Soil, Environmental and Atmospheric Sciences in the School of Natural Resources (September 2014-September 2016), and as president of the National Weather Association (2011). Market has received teaching awards from CAFNR and the University of Missouri, in addition to the J. Kevin Lavin Leadership Award from the National Weather Association. He is associate editor of the journal, Atmosphere.

His research focuses on synoptic and mesoscale dynamics, in particular, the morphology and evolution of extratropical cyclones, jet streak-frontal interactions, heavy rainfall and snowfall forecasting and precipitation efficiency.

Wilhelm Stanis, pictured at right, joined CAFNR in 2008 as an assistant professor in the Department of Parks, Recreation and Tourism. She was promoted to associate professor in 2014. Wilhelm Stanis is also an adjunct associate professor in the Department of Forest Resources in the College of Food, Agriculture, and Natural Resource Sciences at the University of Minnesota, where she earned her Ph.D. She has received awards for service from the School of Natural Resources, and for advising from the University of Missouri. Wilhelm Stanis has served as associate editor of the Journal of Leisure Research and is a committee chair for The Academy of Leisure Studies. She also has served as an advisor for the City of Columbia Parks and Recreation Department on various projects.

Her research is in the human dimensions of natural resource management with an emphasis in factors that influence aspects of outdoor recreation. Specifically, Wilhelm Stanis’ work examines the role of parks and public lands in promoting physical activity and public health, benefits of and constraints to outdoor recreation, and issues in outdoor recreation relating to diversity and youth.