As an avid baker with a retired custom home builder for a husband, Kristen Smarr has always been “fascinated” by gingerbread houses.

But until last year, she’d never built one.

“Not even a kit!” she says. “I’ve just always admired them.”

But even without her own previous personal experience, she has helped bring a new holiday tradition to mid-Missouri in the form of a gingerbread house competition and display. 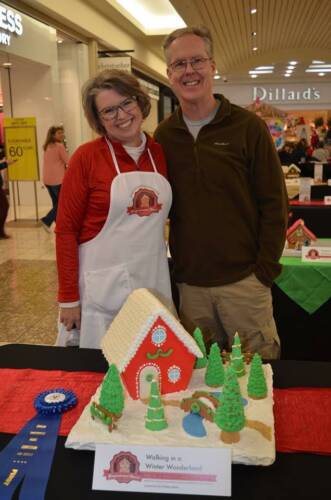 Kristen, CAFNR’s director of strategic communications, and husband Rusty love the Christmas season and enjoy travelling at this time of year. Gingerbread houses were always something they would see on their holiday travels – including at the White House and the Biltmore Estate in Asheville, North Carolina.

“I thought it would be a fun event,” she says. “But it just never took off.” Kristen and Rusty have been supporters of the local Ronald McDonald House for many years. Over the years, Kristen has served on committees for the charity, hosted fundraisers at their company’s model homes, and cooked meals for families staying at the local house.

Rusty’s dad, who was also a local home builder, built the original Ronald McDonald House in Columbia. That house, located at the corner of Stadium and Monk Drive, opened in 1983. When the University of Missouri Women’s and Children’s Hospital opened in 2010 at the current location on Keene Street, the need to build a new House within walking distance led to the construction of a new 18-guest room House on East Lansing.

Kristen also has a fondness for the charity through her own family.

“I grew up with a sick father,” Kristen says. She remembers how hard it was to balance caring for her dad, who was often in and out of the hospital, with the demands of everyday life. They never let her father be alone while in the hospital – but were lucky enough to live close to where her father received treatment.

She says she can’t fathom how difficult it would be to be far away from home while a child is receiving treatment – to have to contemplate leaving your child alone in the hospital. Keeping families close to their hospitalized children is the mission of the Ronald McDonald House. 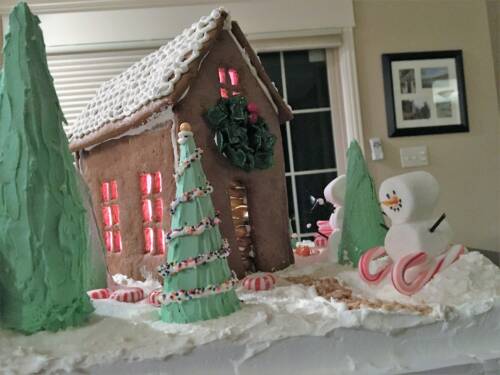 Years later, after a change in board leadership at Ronald McDonald House Charities of Mid-Missouri, Kristen brought the idea up again of a gingerbread house contest. Now, the “Build a House for the House” gingerbread house competition and display has just finished its third year, hosting its most recent event Sunday, Nov. 11, at the Columbia Mall’s Dillards wing. Kristen is on the event’s organizing committee.

Entry categories include youth, adult and business, and awards are given in each division. Event attendees and other supporters also “vote” for their favorite houses with donations to Ronald McDonald House Charities, as part of the coveted “People’s Choice Award.”

Kristen and Rusty entered the competition both this year and last year. Last year, Rusty came up with the structure of the house, a “Woodland Christmas Cottage,” while she provided the décor, complete with marshmallow snowmen.

This year, she found a book at the library that provided inspiration for their red, snow-covered Christmas cottage entry – which took first place in the Group Adult Division. 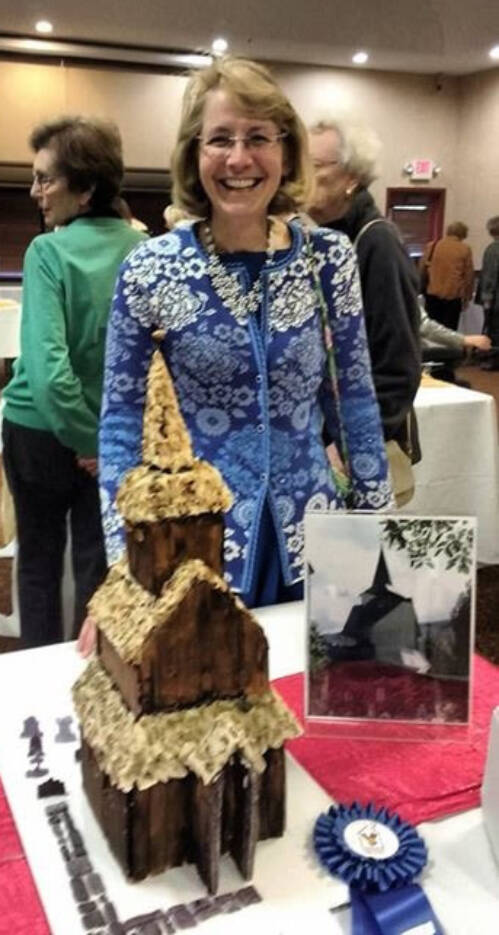 Shari Freyermuth, assistant dean of academic programs and director of student services, has also entered a gingerbread creation in the contest two of its three years – this year and in 2016.

In 2016, her entry was a replica of a stave church in Norway that she had seen on vacation the previous summer. That entry placed first in the Individual Adult Division.

This year, Shari, who is also an associate teaching professor in biochemistry, says she didn’t really have a theme – she just “started making structures and decorating them.

“There was a lot of candy involved,” she says. “It’s fun to stroll through the Candy Factory looking for candy that you can use in various ways on your house.”

Her finished creation, “A Train Runs Through It,” received second place in the Individual Adult Division this year.

Shari says she has been making gingerbread houses for years for her family. She started baking in graduate school as a stress reliever.

“I really started going all out when my kids were young. I would make some crazy birthday cakes for them,” she says.

She says she enjoys the decorating, of course, but also the structural design of creating gingerbread houses.

“That can be challenging, but also fun,” she says. “It gives you a chance to try things that you don’t normally get to do.” She said this contest seemed like a good opportunity to do something she loves – while also raising money for a great cause – especially around the holidays. 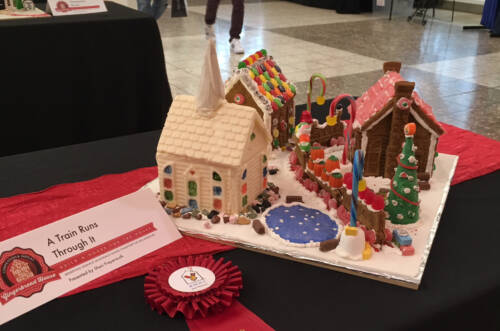 Shari Freyermuth’s 2018 gingerbread creation, “A Train Runs Through It.” Photo by Michelle Enger.

Shari just returned from a trip to Asheville, North Carolina, where she saw entries for a gingerbread house contest at the historic Grove Park Inn. She says some of the designs were astounding – and she just might have gotten some ideas for her entry for next year.

“People from all over send me ideas now,” she says. “It’s so much fun to build it together. It’s great family time or team building. There’s something wholesome about it – sugar, candy, creativity. And it’s for a great cause.”

Learn more about Ronald McDonald House Charities of Mid-Missouri, including how to volunteer.