For doctoral student Doreen Mutoni, coming to the United States to study crop breeding was due, in part, to the crop devastation she witnessed upon returning home to Rwanda after receiving her Master’s degree in the United Kingdom.

Doreen is in her final year of the Borlaug Higher Education for Agricultural Research and Development, scholarship program, or BHEARD. The program, which is organized through Michigan State University, and funded by the United States Agency for International Development, or USAID, provides support for agricultural researchers from Feed the Future countries, including Doreen’s home country, Rwanda.

In September 2013, Doreen completed a Master’s degree in Molecular Genetics at the University of Leicester. Immediately after finishing her schooling, she returned to Rwanda and her home institution, the Rwanda Agriculture Board (RAB). The next year, a delegation from USAID and BHEARD visited Rwanda for the first time, and came to the RAB facility. Doreen was one of those who showed them around the institution, and they encouraged her to apply to their program, as it would allow her to study and get her Ph.D. in the United States, then come back and do work in Rwanda. So, she applied and was accepted. The scholarship “supports coursework at U.S. and regional universities and provides funding for research in the student’s home country.”

While at the Rwanda Agriculture Board, Doreen was placed on the plant pathology team, using her newly acquired skills to investigate an outbreak that was devastating the maize crop in the country at the time. The goal of her team was to analyze diseased plants and determine why the crops that so many farmers in the area depended on were being killed off in large numbers. As it turns out, the culprit was Maize Lethal Necrosis Disease, a nasty combo of two viruses that had previously affected other regions of eastern and southern Africa, and had now made its way to Doreen’s home country and managed to completely overcome the maize crops’ immune systems.

What she saw was “fields upon fields” of diseased crops that would eventually result in “a completely and utterly devastating loss of the maize crop in that field.”

“I can’t describe what it’s like looking at hectares upon hectares [approximately 2.5 acres] of a crop that’s not going to be. People won’t be able to harvest that,” Doreen says. Putting herself back in the moment, she stresses the impact diseases like these have on her country.

“The thing to remember is that the majority of farmers in Rwanda are subsistence farmers,” she said. “They have small plots of land; they grow just enough to feed their families.

“It was very sad just driving through the country and seeing all these fields that farmers are not going to be able to get any yield from.”

Witnessing the devastation that disease outbreaks can wreak, Doreen recognized the importance of developing and breeding crops bred for resistance to diseases.

“That kind of research during the development of varieties would reduce the amount of work required in in the lab,” she said. 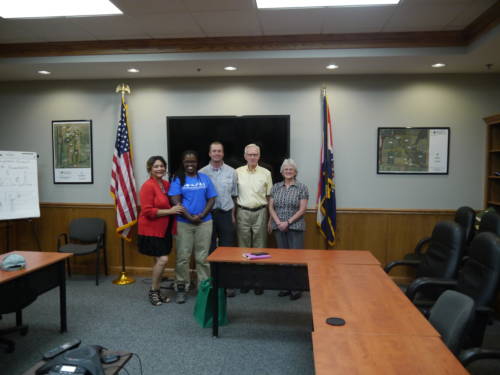 So, Doreen applied to study soybean breading as part of the BHEARD program. While the program has been a great opportunity to help her achieve her goals, she said it has also resulted in her living farther away from home than ever before. The specific location where the scholars are sent depends on what they decide to study, and Doreen wanted to shift her focus from a lab-based background to field-based breeding because, as she puts it, “that’s something that we need now and will always need. People will always need food.”

And it was this decision that brought Doreen to the University of Missouri, where she has been mentored by Henry T. Nguyen, Curators Distinguished Professor of plant sciences, and Andrew Scaboo, assistant research professor, plant sciences. They have provided academic insight, which has complemented the ongoing CAFNR International Programs (CIP) staff support, and sub-recipient grant management under Willi Meyers, professor emeritus, agricultural and applied economics, and Ken Schneeberger, director of CAFNR International Programs.

As Linda Journey, business support specialist for CAFNR International Programs says, “It has taken a village to make this unique project such a success!”

Once she has completed the program, Doreen will return home to begin work in soybean breeding research in Rwanda. However at the moment, Doreen’s focus is simply on finishing up her work and receiving her Ph.D., a goal she has had since she was a child.