Rachel Owen didn’t have an interest in policy until her research brought her to Capitol Hill for a Congressional visit in 2016. Now, her newfound awareness led her to speak at Research!America’s Post-Election Briefing on Nov. 8 in Washington, D.C.

Owen, who is a Ph.D. candidate in natural resources in the College of Agriculture, Food and Natural Resources at the University of Missouri, spoke about the Missouri Science and Technology Policy Fellows (MOST), which she co-founded, and the organization’s successful mid-term election engagement projects. In addition to speaking about MOST’s mid-term events, Owen had the opportunity to share some of the lessons she learned about how other groups can effectively foster discussions between candidates and scientists in future elections.

“It was a true honor to share the stage with national political correspondents, Reid Wilson and Yamiche Alcindor, former U.S. Representatives, and the presidents of Research!America and American Association for the Advancement of Science,” said Owen. “I was really proud to be recognized for the work we’ve been doing in Missouri with the MOST Policy Fellows and to be able to share a bit about our organization at a national scale.” 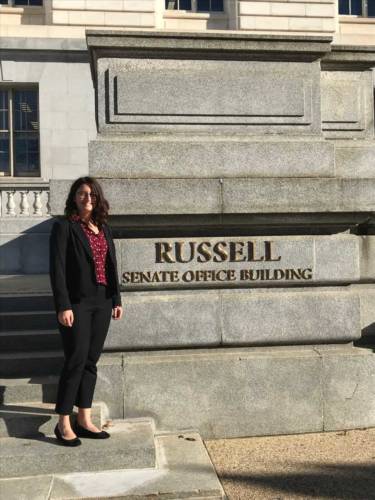 MOST was founded by Mike Hendricks, Hallie Thompson and Owen in 2016 after seeing how science was portrayed in the media surrounding the election. Hendricks is a doctoral candidate in political science, and Thompson is a doctoral candidate in plant sciences, both also at Mizzou. The organization was modeled after other states that started state-level science and technology fellowships. In addition to Owen and Hendricks, who are the two co-directors, there are five MU graduate and undergraduate students voluntarily running the organization.

The organization became connected to Research!America through a grant. Research!America is a foundation in Washington, D.C., that works to improve the effectiveness of research around the nation, primarily in health-related fields. In an effort to increase the effectiveness of research, they created Bi-Partisan Civic Engagement Grants surrounding the midterms. The goal of the grants was to highlight how people could consider science when voting.

With the grant, MOST hosted a candidate forum on MU’s campus and two Senate debate watch parties, one in Columbia and one in St. Louis. Scientists spoke before the events, giving presentations about their research and the potential the research had to impact policy.

The ultimate goal of MOST is to place either Ph.D. candidates, or people who recently received their Ph.D. in a STEM discipline, in Jefferson City. Legislators could then use the scientists as a resource when drafting or voting on bills.

“Essentially, we want to take what people are doing here in Missouri, at our research institutions, and make sure that people in Jefferson City understand what we are doing, as far as research goes, when they make decisions,” Owen said.

The goal is to make sure legislators know the benefits and consequences of their decisions from a scientific perspective, Owen said.

MOST is currently still in the fundraising phase. They hope to have the first fellows placed during the 2021 legislative session.

In the meantime, MOST is hosting events and writing short articles explaining the science behind various legislation and science to consider while voting.

“Just doing my science isn’t really enough,” Owen said. “That is enough for a lot of people, but I really want to be able to connect my science with society and make my science, or make other people’s science, more impactful.”

It was a unique path that brought Owen to that conclusion.

“I went to college wanting to save the world,” said Owen. “I wanted to do something that made a positive impact and I really had absolutely no direction of what I wanted to do with that.”

Owen, who is from Ankeny, Iowa, didn’t grow up on a farm. She received a scholarship to study biology in a college of agriculture. During her freshman year at Iowa State University, she took a soil science course to fill a general elective requirement.

“I realized this is so important, but nobody wants to study soils,” Owen said. “I fell in love with soil science, getting my hands dirty and getting to travel around the world to look at soils.”