On Friday, Sept. 28, Mizzou Botanic Garden signed a pledge to stop the spread of invasive species and ceremoniously cut down the first of eight Callery pear trees in CAFNR’s Courtyard during an invasive plant awareness and educational event.

Mizzou Botanic Garden is the first entity in the state to have signed the Missouri Invasive Plant Task Force pledge.

“This event is to signal and highlight, at the same time, the need to get serious about removing invasive plants from the campus,” said Pete Millier, Director of Campus Facilities — Landscape Services and the Mizzou Botanic Garden. “We’ve got a problem with these invasive plants.” 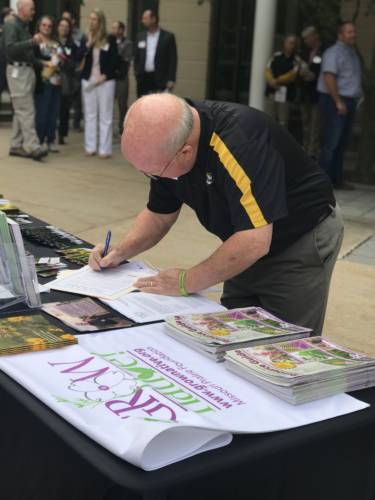 Callery pear trees are a non-native, invasive plant species. The eight Callery pear trees were planted in the courtyard in 1998 as a part of landscaping for the new Anheuser-Busch Natural Resources Building because of their spring blossoms and fall foliage. When the trees were introduced by the National Arboretum in the 1960s, they were believed to be sterile.

Unfortunately, the trees cross-pollinate, which is a problem.

The rest of the seven tress also were removed, later the next week.

“I know in my time here we’re not going to remove all of the invasive species,” Millier said. “But what we can do, is start to nudge the scale in the right direction.”

“I am so glad today we are ceremonially removing this one tree,” said Dr. Shibu Jose, Director of the School of Natural Resources. “Hopefully this is the beginning and we won’t have any invasive species planted on this campus and we can at least start working on removing invasive species from our landscape and from our natural communities.”

Mizzou Botanic Garden has executed other invasive plant projects in the past. The organization removed five Callery pear trees at Memorial Union and replaced them with non-invasive trees and removed bush honeysuckle along a portion of Flat Branch Creek.

The Mizzou Botanic Garden Friends Advisory Board has identified the CAFNR Courtyard as one of the top priority campus landscape renovation and advancement projects. According to the board, “The vision for the courtyard landscape is to recognize, interpret and enjoy the inherent beauty, ecosystem services support and natural resources bounty of Missouri’s native woodlands.”

The event was presented by CAFNR, the Mizzou Botanic Garden, the Missouri Invasive Plant Task Force, and the Missouri Department of Conservation. Resources on the identification and control of invasive plants can be found here.