This May, senior Kenton Daniel (KD) Bohon will graduate with a degree in Agricultural Systems Management. Next December, so will his son.

There was a time when 44-year-old KD was attending college with students his own age. About 25 years ago, after graduating high school, KD attended the University of Central Missouri for his freshman year, and then Truman State University his sophomore. During this time, he considered pursuing engineering or architectural drafting, but never officially declared a major.

“I remember feeling very lost,” KD says. “College wasn’t the place for me at 18.”

One of the reasons he felt so lost is due to the fact that most of his friends and family members started working immediately after graduating high school. So the thought that he should already be out in the workforce rather than the classroom never let up, and eventually he left college to do just that.

Between his sophomore and junior year, KD was offered a full-time job in transportation and he accepted it, raised a family, and set up a life for himself, settling in Camdenton on the Lake of the Ozarks. But while it wasn’t something that kept him up at night, the thought of finishing his degree always remained in the back of his mind. Yet he never really believed he would ever go back, he says.

A few years ago, KD realized that at the company he worked for, “there was really nowhere for me to go within the organizational structure.” But then came an opportunity. When his wife, who received her master’s degree from Mizzou, took a job in Columbia while his daughter was preparing to go off to college around the same time, KD got inspired and he asked himself, “Why don’t I go finish something that I started?”

And just like that, KD retired and became a junior at the University of Missouri. Unlike his previous college experiences, he settled on his field of study, Agricultural Systems Management, rather quickly. While it may not seem like an obvious choice, KD had been a part of the family farm on his wife’s side, and as it turns out, his years in transportation had prepared him by giving him extensive technical experience with heavy equipment and construction/personnel management, in addition to budgeting and planning.

When it comes to college, KD and his wife Mary have instilled in both their children the message of, “It’s not if you’re going, it’s where you’re going.” His son, Mitch, followed this message, and chose Mizzou. Mitch, who is currently a junior, is also studying Agricultural Systems Management. Upon learning of his father’s plan to not only go back to college, not only enroll in the same university as him, but also decide to study the same program as him, Mitch thought: “Well, if we start having classes together that might be weird.” Nonetheless, he accepted it enthusiastically from the start.

More than anything, seeing his father achieve something he has worked hard for has made Mitch proud.

“As family members, you always support each other no matter what,” Mitch says. “I was really happy for him.”

As it turns out, the two have had several classes together, and while he initially thought the concept would be odd, Mitch quickly discovered something.

“Your Dad makes a really good study buddy,” he says.

“We’ve leaned on each other a lot in a lot of our classes,” KD says. 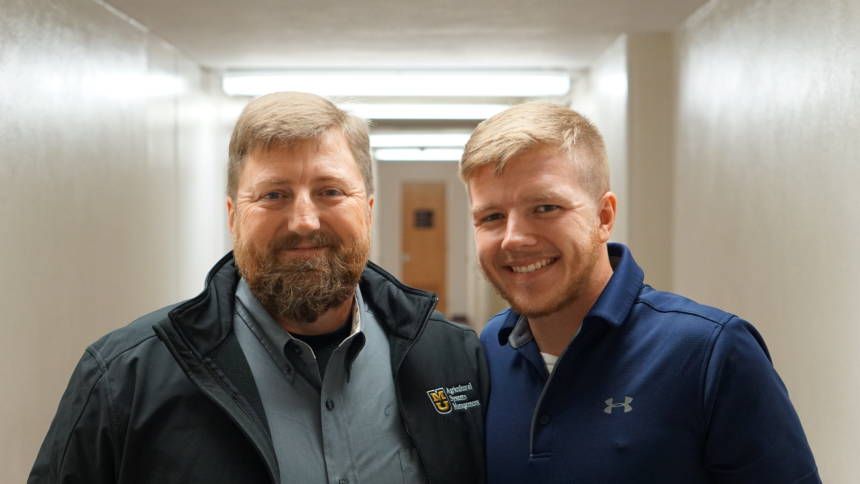 Like many incoming students, KD was worried upon arriving at Mizzou. Specifically, about how he was going to fit in. However, KD’s experience has been “overwhelmingly positive,” he says. At Mizzou, KD has found a welcoming community, and has gotten involved in ASM (Agricultural Systems Management) Club as well as Alpha Mu, the ASM honors fraternity. And despite being “old enough to be these kids’ dad,” the other students he interacts with daily through classes and other experiences have shown respect for his age while at the same time helping him “feel like I don’t stand out that much.”

During his time at Mizzou, KD has made an effort to take advantage of all of the opportunities presented to him, and one of those opportunities broadened his horizons even further than simply being a college student again: spending his spring break studying in Germany. He participated in this CAFNR study abroad experience, which focuses specifically on ASM, last semester.

“I just wanted to do something that I’ve never done,” KD says. In part, as a result of his father’s recommendation, Mitch will be going on the same trip next year.

But KD also had another fear: would his being a Mizzou student be a detriment to Mitch? “I was kind of concerned about it actually,” KD says. “I didn’t want to interfere or impede on his college experience.” But as it turns out, it wasn’t an issue at all. “I think it’s made the both of us better students,” KD says.

“We keep each other in check,” Mitch says.

While KD and Mitch have always been close, the experience of being classmates has only strengthened their relationship.

“He’s my son but he’s kinda my best friend, too,” KD says. That being said, KD still tries to let Mitch have his own experience. “You know, I’m a dad, I’m middle-aged. I’m not going to get into the same extracurriculars that he is. And I would never try to.”

But while he may not have gotten fully involved with the younger crowd, KD has still learned a lot from the students he has been surrounded by for the past few years adding, “They’re smarter than I am, and who doesn’t want to be around smart people?”

“It is interesting being among the youth every day, because I wasn’t for 25 years,” KD says. “It can be comical, it can be, you know, eye-opening, it can be frustrating,” he says. But by listening to them, KD says he has learned that just like every generation, they see things differently than the generation before them.

While Mitch had completed his freshman year at Mizzou when his father enrolled, thanks to credits he earned from Central and Truman, KD will be graduating before him, and just like many seniors with graduation on the horizon, KD is not completely sure what he plans to do upon completing his degree. But he’s happy with the uncertainty for now.

“It’s kind of exciting,” KD says. And it’s possible the father and son may see even more of each other down the road.

“I don’t think it’s out of the question that we both might end up in graduate school.”