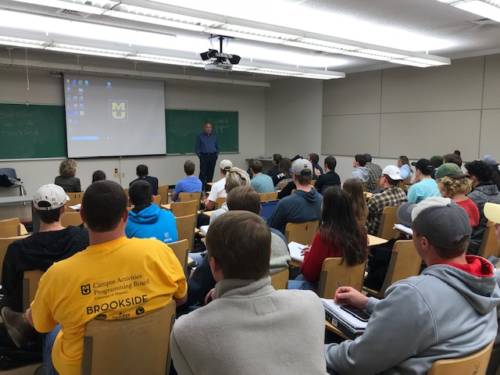 Craig Bacon speaks in a CAFNR class during his visit. Photo by Tara O’Brien.

Keep learning and keep “pivoting” – that was the advice to students from Craig Bacon, senior vice president of technical services for Simmons Prepared Foods. Bacon was on campus Oct. 10-11 as part of the College of Agriculture, Food and Natural Resources’ Robert O. Reich Executive-in-Residence program, which brings industry leaders to the college to share knowledge and experiences with students, faculty and staff.

Bacon said he’s had major pivots in his career – and taking advantage of those rather than going against them can be key.

“At the time you might not even notice that it was a pivot, and later you look back and go, ‘that was a pretty big change for me,’” he said. “Don’t make your mind up too much what you’re going to do. There will be plenty of opportunities later to see – get plenty of experience and exposure, and keep your options open. Work toward a degree, but get exposed to things you wouldn’t normally get exposed to.”

For Bacon, one of the major pivots in his career came when he asked to join the Livestock Judging Team as a student in CAFNR. Bacon graduated in 1984 with a degree in Agricultural Education; he had extensive background with livestock growing up on the family farm. The Livestock Judging Team coach at the time, Jerry Lipsey, asked Bacon to instead learn what was “under the skin” first, as part of the Meats Judging Team.

“That was a big pivot,” Bacon said. “I had no idea this industry called ‘meat science’ was out there. I spent a year doing that and got exposed to an industry I didn’t know was out there.”

Lipsey then suggested Bacon continue on to graduate school and coach a meats judging team himself. He took Lipsey’s advice and got his master’s and doctorate at the University of Tennessee. Being part of these meats judging teams meant Bacon got to see some of the largest meat processing plants in the country.

“I thought I was going to be an ag teacher,” Bacon said. “This led to industry and a career.”

Bacon joined Oscar Meyer after receiving his Ph.D. He then spent 26 years with Tyson, and has been with Simmons for a little over a year now. His career has been spent in product research and development – at Tyson he supervised a team of 300, spread between two locations. Simmons supplies poultry to restaurants such as Chik-Fil-A, Taco Bell and Pizza Hut, and pet food to private-label brands.

Bacon encourages students to never stop learning­ – he enjoys staying connected to the next generation through teaching and through mentoring interns.

“Just because you spend four years at college doesn’t mean learning will quit,” he said. “Learning will continue. I can’t think of day I haven’t learned or been curious about a product development, or an opportunity or what causes consumers to buy this vs. that. I think that curiosity will allow you to have a lot of opportunities, in whatever your field that you follow.” 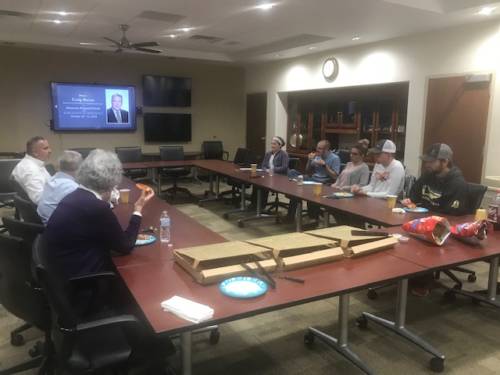 Internships are a valuable part of the learning experience – and a great way to see if a field or a company is the right place for you, he said. Bacon spoke extensively about their importance in the classes he visited as part of his Executive-in-Residence experience, including courses in meat science, agricultural education and leadership, food product development, and agribusiness.

“It’s around talent and teams,” he said of success in a corporate environment. “It’s usually not about technical capabilities, but how do teams work together? How do I make sure I have the right talent coming into the organization?” Bacon said he tries to give students meaningful internships with real-world projects.

“For three months I get to interview you and you get to interview me,” he said. “It gives you an idea if this is really what I want to do. For us, getting that right talent is so important. You can’t do that in a 30-minute interview.”

Although Bacon has enjoyed his experiences as an adjunct professor at Arkansas and at Tennessee, he said there was just something about coming back to and interacting at the university where he got his start – the University of Missouri. This is a big part of what made him want to participate as a CAFNR Executive-in-Residence.

“I had a lot of great youth experiences with the University of Missouri. Those gave visibility to what was at the university and what you wanted to be a part of; those chances to be on campus and see what was here.” Bacon said. He showed livestock at Trowbridge and attended the FFA Convention on campus while in high school.

“As an ag major, there was never a question of where I would go to school. The University of Missouri, as a land-grant, was just where we were going to be.”