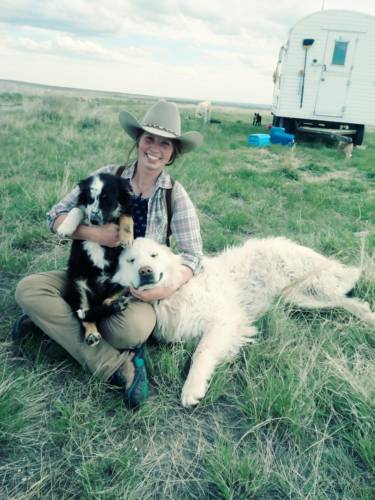 Ashleigh with a guardian dog for the sheep (right) and a young herding dog (left), at the USDA Sheep Experiment Station in Dubois, Idaho.

Ashleigh Redman has found her niche in animal sciences, thanks to the robust network at her fingertips here in the division.

Ashleigh is a senior in animal sciences from Dittmer, Missouri, about two hours southeast of Columbia. Her passion for animal husbandry and small ruminants started early on her family’s farm, where they raise both dairy goats and meat sheep. After receiving an associate degree as well as a veterinary technician degree from Jefferson College in Hillsboro, Missouri, Ashleigh wanted to continue her education to explore the possibility of veterinary school.

After meeting with academic advisors in the Division of Animal Sciences, Ashleigh realized that her previous education set her up for success to obtain a bachelor’s degree from the University of Missouri. Ashleigh quickly became involved in a variety of extracurricular activities after joining Mizzou, including undergraduate research and the meats judging team. Some of her favorite memories include undergraduate research, particularly “the teamwork built when working with ‘difficult’ cows as you are trying to handle her newborn calf, along with late nights and early mornings,” she experienced during calving season.

Soon she also branched out to off-campus experiences – including something that has been on her “bucket list.” In the spring of 2017, she attended Sheep Shearing School at Lincoln University in Jefferson City. Ashleigh’s passion for learning more about sheep management and shearing helped her land an apprenticeship with Guy Frazier, the instructor at Sheep Shearing School.

“He taught me everything I could imagine; I wanted to learn how to sharpen my own blades and shear different sheep. Over a couple of months I sheared hundreds of sheep in every breed you could imagine,” she says.

Ashleigh has since established her own shearing business – Shire Shearing. With Missouri sheep farmers having small flocks usually ranging from three to 30 head, it can be difficult to find someone willing to travel for a few animals. This is Ashleigh’s niche.

“Once you know how to shear sheep, the sheep find you…it is incredibly hard work, but extremely satisfying,” she says.

It was not long before Ashleigh became interested in pursuing an internship; however, there were not many readily available that focused on small ruminants. Through conversations and the networking ability of faculty advisors including Dr. Allison Meyer, assistant professor of animal sciences, and Dr. Bryon Wiegand, professor of animal sciences, Ashleigh was able to create a summer internship with Dr. J. Bret Taylor at the U.S. Sheep Experiment Station in Dubois, Idaho.

“The people I worked with out there have become my friends and family,” she says. After completing her summer internship, Ashleigh returned six months later, taking the spring semester off from school to gain additional experience working through lambing season with a 2,500 head flock of sheep on range.

Ashleigh will be graduating with a bachelor’s in animal sciences this December and will begin her master’s program in January of 2019 under the direction of Dr. Wiegand. She will complete her research back at one of her favorite locations, the U.S. Sheep Experiment Station, looking at the capability of Polypay ewes to raise triplet lambs on range. The results of this research will aid in the management decisions of western-state farmers who raise 6-10,000 head of sheep on range.

Ashleigh’s greatest piece of advice to current and prospective students is to search for opportunities, even if they don’t appear to be readily available; utilize the faculty network, she says.

“You’re only three degrees away from something amazing with the animal science network,” she says. “Definitely get to know your professors, and use the networking to your advantage. I could not be where I am today without my professors.”

Additionally, do not be afraid to take your time in school.

“Take a semester off to gain the experience, and further develop professional relationships. I gained the skills to work lambing season so I will be even more prepared when I start my graduate research out in Idaho.”