Each year, students compete with other floral design programs within the U.S. and Canada in a four-hour-long competition designed to give students tangible use for their floral design skills. One hour is given to each of the four categories, which vary from year-to-year. Last year’s categories included sympathy, wedding, interpretative and fashion. The categories are revealed the night prior to the competition, while the floral materials and containers aren’t revealed until competitors enter the competition space.

Kailey Brooks, a plant sciences senior, was one of the three University of Missouri students on Mizzou’s student chapter of the American Institute of Floral Designers, AIFD, team.

MU is the only school in Missouri with an AIFD student chapter, which is one factor that drew Brooks to Mizzou.

Brooks, a Fulton, Missouri native, and the daughter of Philip and Noelle Brooks, knew she was interested in floral design after competing on her high school’s FFA floriculture team. 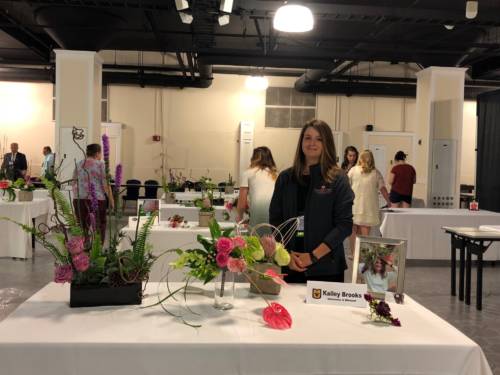 “I followed my competitive side and I know designing is something I really, truly love to do,” Brooks said. “I like to branch into what’s different and that’s what this contest really is, is trying to take your materials and come up with what they are looking for, but in a different way.”

The competition was held July 30-June 4 in Washington, D.C. Brooks said the majority of practice began in February. In order to be eligible to compete, participants must complete 50 hours of unpaid design time and attend various design shows.

Brooks has competed in the National Symposium three times, which is the maximum number of times allowed. She said a major part of competing is figuring out what techniques you can accomplish in the time limit.

“I personally prepared by just being very open about criticism and taking that more in stride,” Brooks said. “It’s about learning where your weaknesses are that way you are more even across the board.”

Brooks said her team really wanted to win the competition as a way of saying thank you to their advisor and coach, Lesleighan Cravens.

“She comes in a lot after work and will stay another two or three hours helping us,” Brooks said. “So that’s something we really wanted to do to give back to her.”

Brooks eventually wants to become certified in floral design from the American Institute of Floral Designers and said competing in events like the National Symposium is a great way to make connections in the industry.

Brooks founded her own LLC, Bare Roots, last spring when a friend asked her to design her wedding flowers. Brooks hopes to continue designing wedding flowers in the future and said MU’s chapter of AIFD can help students prepare for their future in numerous ways.

“Students can definitely make connections if they are interested in the floral industry,” Brooks said. 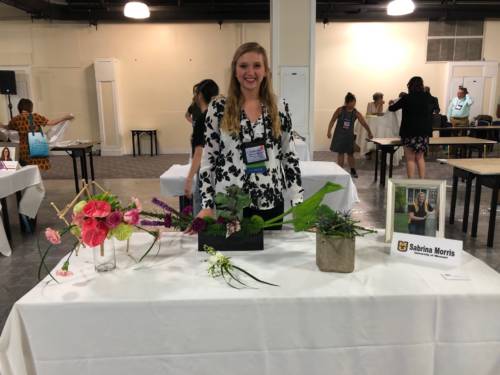 Sabrina Morris is a junior studying agricultural education and was one of Brooks’ teammates on MU’s student chapter of AIFD floral design competition team.

Morris, a Rolla, Missouri native, and the daughter of Rachel and Darren Morris, was born into a family full of engineers who all attended University Missouri Science and Technology.

After attending an assembly about her high school’s FFA chapter in eighth grade, Morris decided to join her school’s chapter.

“My ag teacher was amazing and he really got me involved,” Morris said. She said her ag teacher told her when she was a freshman that she would be an ag teacher. Morris told him no, that does not sound like something she would do.

“Now I am studying ag education, so it’s kind of funny how that works,” Morris said.

“One of the reasons I joined floral design club is because I knew nothing about it and as an ag teacher, I want to be as well-rounded as possible for my future students,” Morris said.

Her high school ag teacher’s daughter was also a member of Mizzou’s student chapter of AIFD and encouraged her to join and attend meetings.

“Lesleighan also pushed me to become more active in club and get involved and showed me that I am better than I thought I was,” Morris said. “She is an amazing teacher.”

“When they called our team as first we all just stood there for a minute and kind of like looked at each other like, us?” Morris said.

“We competed against a lot of students that go to school specifically for floral design, so for us to be able to come out on top this year was a really big deal.”

Morris said it was especially exciting to win because Lesleighan was also receiving her AIFD accreditation that year.

Morris encourages all students, those with experience and those without, to join MU’s floral design club.