Darryl Chatman has had many educational and career experiences since getting his bachelor’s and master’s degrees in Animal Sciences at the University of Missouri. But it’s clear – his heart is still in the College of Agriculture, Food and Natural Resources.

And today, as a Curator of the University of Missouri System, he says he talks to his mentors in Animal Sciences and around CAFNR now even more than ever.

It was these mentors – Jim Spain in Animal Sciences and Tom Johnson in Applied Social Sciences – who helped him explore opportunities leading him to who he is today.

Darryl always had an interest in agriculture, even before he came to Mizzou on a football scholarship in 1992.

“A primary piece of the economy where I’m from in St. Louis is all agriculture – Monsanto, Purina, Anheuser-Busch,” he says. “I really wanted to get an education that would make me want to come back to St. Louis and work in the ag technology aspect – I thought CAFNR would give me a great way to do that.”

But majoring in Animal Sciences specifically had more to do with the people he encountered in his first years at Mizzou.

“I took courses in various departments,” he says. “The people in CAFNR are outstanding; very personable. I had outstanding teachers. The push into Animal Sciences was probably more Dr. Spain – I wanted a home in CAFNR and I found a great mentor who happened to be in Animal Sciences.” (Spain is now the vice provost for undergraduate studies and eLearning at Mizzou, in addition to being a professor of Animal Sciences.)

Darryl received his bachelor’s degree in Animal Sciences in 1997, and went on to get a master’s in 2001.

“I’d say there was a new experience every day,” he says of his time in Animal Sciences. “I learned something new every day. From my experience preg-checking beef and dairy cows out at the farm, to research projects on heat stress in dairy cattle; there was always something interesting.”

The hands-on opportunities at the various CAFNR Research Centers were a huge plus to the Animal Sciences program, Darryl says.

After getting his master’s in Animal Sciences, Darryl headed to North Carolina State University (Dr. Spain’s alma mater) to work on his master’s in Public Administration, which he received in 2003.

“My goal was to evaluate public policy in agriculture. I really liked doing that through the lens of being a scientist,” he says.

After a summer back in Columbia working at the Mizzou meat processing facility, he entered a graduate degree program in Agricultural Economics and started applying to law school.

Darryl soon was on a dual MS and JD track.

“But once again my focus in law school was in agriculture,” he says. He concentrated his master’s studies on rural economic development with Tom Johnson, now an emeritus professor. Darryl enjoyed summer internships during that time at the Center for the Study of Rural America at the Federal Reserve Bank of Kansas City, and at Monsanto.

After graduating from law school in 2008 (he received his master’s of science in Agricultural Economics in 2007) he went to work for Armstrong Teasdale, a law firm headquartered in St. Louis. In 2014, he was tapped by director Richard Fordyce to serve as deputy director of the Missouri Department of Agriculture. In 2016, he rejoined Armstrong Teasdale and started an agriculture and life sciences practice group. In 2017, he was tapped by the Greitens’ administration to serve as general counsel for the Missouri Department of Agriculture. Chatman is now the governance and compliance senior vice president for the United Soybean Board – he started in this role on Sept. 17.

“Being a scientist, where you learn to apply the scientific method, is very close to what we do in law,” he says. “Getting to the heart of an issue: what’s your hypothesis, and what evidence do you have to support your hypothesis?” His background in Animal Sciences has always been key. Agriculture-related cases often come across his desk.

“We had certain agricultural issues that came up from time to time at the law firms where I worked. For example, I litigated a pig semen case under the applicable sections of the Uniform Commercial Code. I also worked on a few condemnation cases involving agricultural land,” he says. “It’s nice for people to know that you can relate to them and know what issues they are facing.”

A caretaker for all campuses 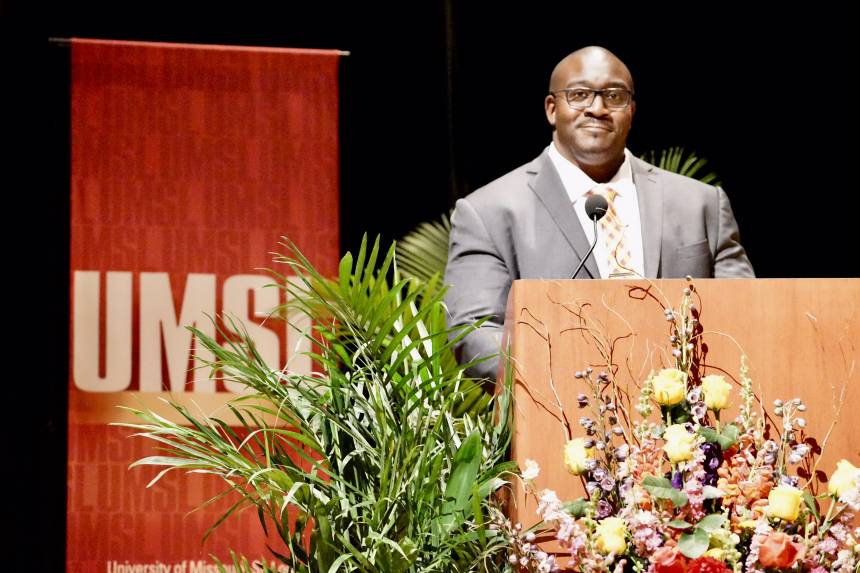 When Darryl got the call that he had been chosen as a Curator for the UM System in 2017, he says he got emotional. The experience has showed him the vastness and depth of our university system – and changed his perceptions.

“I’ve always rooted for Mizzou, but now I take care of it,” he says. “But I’ve had to remind myself that I’m now a curator for all campuses, all schools, but my heart is in CAFNR. I’ve learned to look at every college and understand the needs of every college. It’s a little bit different for me. It’s been a transition, but a good transition.”

He says he’s been amazed by all of the work each part of the system does – he’s also enjoyed learning about all of it. He feels Mizzou is moving in the right direction and has the right leaders in place – including CAFNR’s Vice Chancellor and Dean Christopher Daubert, who joined the college last August.

“I think Dean Daubert is a great pick for our new dean. I think his vision is inspirational,” Darryl says. “I love the way he thinks about food processing and reaching the consumer markets; that’s very exciting. I’m excited about his vision and will help him in any way as an alum and someone who loves CAFNR.”

Being a UM Curator has also brought Darryl back to his mentors in a way.

CAFNR at the heart

Although he now has responsibility for the entire UM system, Darryl still enjoys exposing new audiences to thinking about agriculture and careers in ag. While pursuing his Animal Sciences graduate degree, he was a member of Minorities in Agriculture, Natural Resources and Related Sciences (MANRRS) – he’s recently spoken to that student group at both Mizzou and Lincoln University. While at the Missouri Department of Agriculture, he helped reboot the Life Sciences Quest program, bringing urban high school students to Mizzou for a summer academy to learn about degrees and careers in agriculture and life sciences. He spoke at the first session of that reboot in 2016, and gave a presentation on intellectual property in 2017.

“That was a passion of mine; that city kids could have access to learning about agriculture on the life sciences side,” he says. He believes there are opportunities to work in agriculture for everyone.

“I would tell them that ag is for you,” he says of urban students. “I think in rural communities, the message is that they can get involved in ag; whether from a row crop or livestock perspective, or developing new technology for John Deere, or working in a lab to develop new ways to feed the world.

“I would go to the city kids and say, for example, that the biotech, animal pharmaceutical and brewing industries are important to Missouri. CAFNR can compete for students that want to go into medicine, chemistry and engineering – all those opportunities are available in agriculture.

“It’s a very noble profession to feed and clothe the world. People don’t realize how exciting it is; how forward thinking it is; how technology has been so important for ag over the centuries. What you have to do with kids is make it interesting. Agriculture is very interesting once you learn about it. You make it exciting – that’s a step in the right direction.”

It’s clear Animal Sciences and CAFNR are still close to his heart, as is the importance of higher education.

“I didn’t know it would be this specific career path I would take, but you have to take advantage of opportunities when they come,” Darryl says. “A lot of different doors open and you take the opportunity. I met great people like Jim Spain, Dr. Johnson and Richard Fordyce. They can make you passionate about something you might not have even thought of yet.”