“While the rain was a bit of a nuisance, the weather improved throughout the day and it turned out to be another great Missouri Chestnut Roast Festival,” said Mike Gold, interim director for the MU Center for Agroforestry (UMCA). “We appreciate all the hearty souls who braved the weather to come out and enjoy the beautiful Missouri River Hills and Chestnut Roast festivities.” 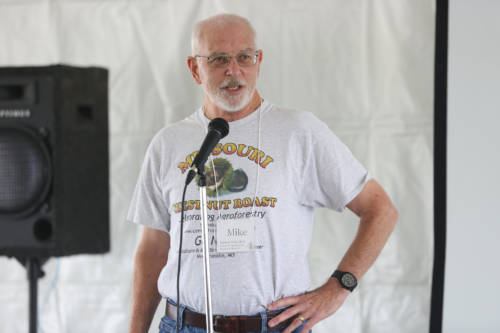 Gold and Shibu Jose, director of the School of Natural Resources and HARC superintendent, opened the event with a UMCA 20th anniversary kick-off ceremony under the main tent. Blanche Kelly, president of Missouri Master Gardeners, followed with an informational session on what the Master Gardeners do throughout the state. Ben Hamrah, with Peachtree Catering, then gave a cooking demonstration using chestnuts. Catherine Bohnert, with the Missouri Department of Agriculture, discussed the AgriMissouri Program helping to connect producers to consumers and consumers to agriculture. Nadia Navarrete-Tindall closed out the presentations with a discussion on the value of native plants.

“Our speakers were incredibly informative and engaging,” Gold said. “We appreciate them taking the time to share their expertise with our attendees.”

The Missouri Chestnut Roast Festival included a farm tour of HARC, a kids’ area and historic Hickman House tours. There were multiple vendors at the event, selling everything from elderberry juice and pawpaw ice cream to handmade ceramics and lathe-turned chestnut wood bowls. There were also numerous organizations who touted the value of Missouri’s forests, forest industry, wildlife and other natural resources.

Free samples of roasted chestnuts were available throughout the event along with fresh chestnuts and chestnut trees offered for sale.

“We had something for everyone at this year’s Missouri Chestnut Roast Festival,” Gold said.

For a closer look at the Missouri Chestnut Roast Festival at the Horticulture and Agroforestry Research Center, visit: flickr.com/photos/cafnr/albums/72157702203981475.