As an agriculture journalism student at the University of Missouri in the late 2000s, Tyne Morgan found herself questioning how her agriculture economics classes applied to her. Now, as the first female host of U.S. Farm Report, she talks about prices, supply and demand and other fundamental factors that impact prices on a daily basis.

From Sept. 19-20, 2018, Tyne visited campus as the College of Agriculture, Food and Natural Resources’ Robert O. Reich Executive-in-Residence. The program brings industry leaders to the college to share knowledge and experiences with students, faculty and staff. During her visit, Tyne lectured to students in CAFNR and the School of Journalism to provide insight gained throughout her career.

Tyne received her B.S. in agriculture journalism from MU in 2008 with an emphasis in broadcast.

As a high school student, Tyne was involved in the National FFA Organization, formerly known as Future Farmers of America. Her involvement in FFA led Tyne to find an internship with a local radio station at age 16. 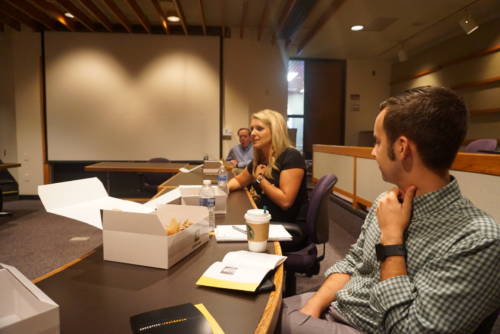 Tyne visiting with students in the School of Journalism.

“I thought I would just be filling coffee, you know doing that type of stuff, but no, within three days they had me prepared to go on air,” Tyne says.

Tyne worked at Brownfield Ag News while a student at MU. Tyne says one year she scheduled classes only on Tuesday and Thursday, so that on Monday, Wednesday and Friday she could work full-time at Brownfield. Tyne also interned with Missouri Corn Growers Association and Monsanto. Monsanto offered her a full-time position and she made the decision to leave broadcast to work in public relations after graduating. Tyne worked in public relations for about five years and then moved to South Bend, Indiana, to work as a national reporter for Ag Day and U.S. Farm Report. In 2014, she was named host of U.S. Farm Report.

“I honestly thought when I got out of broadcast that I would never get back in,” Tyne says. “I thought my broadcast days were over. But, you can never rule anything out and I’ve learned if you just keep those contacts that you’ve made open, then you can always get back to where you’ve always wanted to be.”

Tyne says the University of Missouri greatly impacted her career. 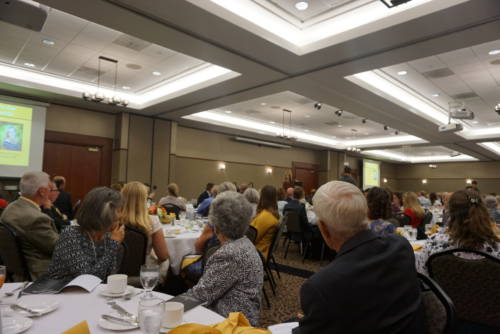 “Without this university, without the College of Agriculture, Food and Natural Resources, I would not be where I am today,” says Tyne. “I truly do believe that. The individual has to have the drive and has to have the skills, but this college aided me so many different ways.

“I can honestly say if I would have gone to another university, I do not think I would currently be host of U.S. Farm Report, which is my dream job,” says Tyne. “This university has helped give me, not only the experience, but the education and then the people to help get me to where I am.”

“Do not second guess it; jump in, head first, both feet, whatever you want to do and take that opportunity on because it will help you in some way down the road,” Tyne says.

Tyne says she also wants to show students that dreams are possible with hard work.

As far as being the first female host of U.S. Farm Report, Tyne says she doesn’t look at it that way.

“I think each individual has their own unique talents and my talent just so happens to be able to work hard and get the job done,” Tyne says. “And so I don’t look at it as a male or a female would be better in this role.”

She’s only the fourth host of the show, following Orion Samuelson, Max Armstrong and John Phipps.

“The good thing about agriculture is there are so many different jobs out there, don’t stop until you find the job that you were meant to do,” Tyne says.