For many years, Mizzou has opened its doors to allow prospective students to explore what the world of Animal Sciences has to offer. From getting to know professors and touring campus facilities, the Division of Animal Sciences has hosted a number of events and summer academies with the goal being not only to get young people excited about Animal Sciences, but also to show them the career opportunities that exist within the field.

One of these opportunities is called Animal Science Exploration Day, an event where high school students from across the state visit campus for a day and get hands-on experience within Mizzou’s Animal Sciences program. The event was dreamed up by Addison Byrne, an instructor in Animal Sciences, and graduate student Maria Haag over lunch, and before long the two presented the idea to their division director and asked him, “Hey this is our idea, can we go for it?” His response: Create a “mini-version” and see if there is any interest. 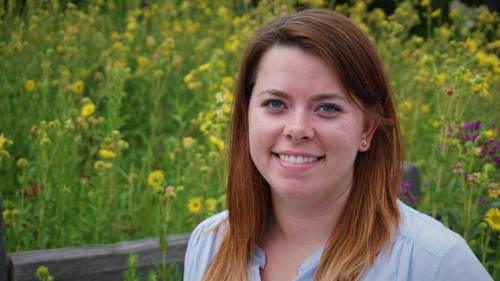 And so, the first Animal Science Exploration Day took place in May of 2017. A total of 52 students applied, and 30 from 13 different high schools were accepted. However, that same spring, Missouri was hit with massive flooding which prevented some of the students from attending the event.

Even with limited turnout the program still received positive feedback, so Maria and Addison decided to do it again that same year in October. Moving the event to the fall, Addison says, gives the prospective students a bit more time to make their final college decisions. This time around, 74 students applied and 50 of them from across 41 schools were accepted. Thankfully there were no historic natural disasters in the area, and all 50 were able to show up, along with 30 parents and teachers.

Starting at 8 a.m, the day begins by taking the students around in rotations to a number of different stations representing the different areas of study the Division of Animal Sciences has to offer including nutrition, reproductive science, meat science and genetics. At each station, there are a variety of unique, interactive activities for the students to take part in, such as practicing artificial insemination, examining semen under a microscope, and discussing reproductive science with the assistance of a fake scrotum.

After rotating through the discipline stations, participants eat lunch with current undergraduate students at a campus dining hall. Here participants can ask current students about their Mizzou experiences.

In the afternoon, students tour University farms and attend a career panel. During the panel they get the chance to ask questions to people involved in animal sciences and hear their stories, an event intended to drive home the message that “You can do anything with a degree with animal science,” Byrne says. While many assume that a degree in Animal Sciences means a future in in a vet’s office, events such as Animal Science Exploration Day help to expose young people to all the things one can do within the field. 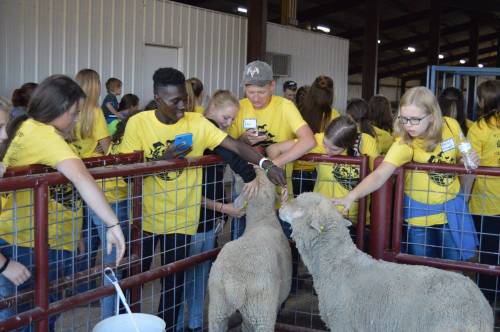 The next exploration day (set for October 5, 2018) is currently being planned, but Addison and the rest of the team behind the event have larger goals they hope to achieve, like expanding to students outside Missouri. Sponsors for the event such as Purina and the Missouri Egg Council might help them achieve this goal and others. Although, according to Addison, the hardest part of getting prospective students involved in Animal Sciences is simply finding a way to reach out to them.

While there are the standard organizations such as the FFA and 4-H that can be utilized to find those who would benefit from Mizzou’s camps, events and academies, “What about your students who don’t have those opportunities?” Byrne says. To find such students, Byrne and the Exploration Day team are using social media, e-mail and phone calls to get the word out with the hope that more students can find the path that’s right for them.

“I think it’s important to reach out to young people to just show them what’s out there,” Addison says. “If you don’t find out until your senior year of college that ‘oh I didn’t know that I could go and do all these different careers,’ you may not have the prerequisites; you may not have the background experience to do that job that you really want to do.”

So far, it appears that Animal Science Exploration Day has been a success. Some of Addison’s proudest moments have been hearing about students texting their parents in the middle of the day telling them that they want to do this, or approaching her directly and saying, “I want to come here. I want to be a part of this.”

The most important advice Addison gives to prospective students is to be open to new things and don’t let pre-conceived notions about who you are and what you do keep you from experimenting and straying out of your comfort zone.

“In our curriculum…you’re getting hands-on experience with beef cattle, dairy cattle, sheep and goats from day one. And even if you’re like ‘no, I’m a cat and dog person. I don’t want to touch livestock’ – be open. Go have fun with it. Cause you’re going to realize that ‘oh, they’re not as bad as they seem.’”