There’s rarely a dull day for students walking through the University of Missouri’s campus. Oftentimes there’s free food, the opportunity to pet a dog, and some days, even a baby calf.

Twice a year, MU’s Dairy Club brings a little bit of the farm to the university with their Calves on Campus event. The event is about more than just showcasing the calves, however. Dairy Club uses the excitement surrounding the animals as an opportunity to start a conversation about agriculture and raise awareness for breast cancer with their “Support Each Udder” campaign.

“It seems small, but with just T-shirts, it turned out nicely,” said Anna Tarpey, the president of Dairy Club. 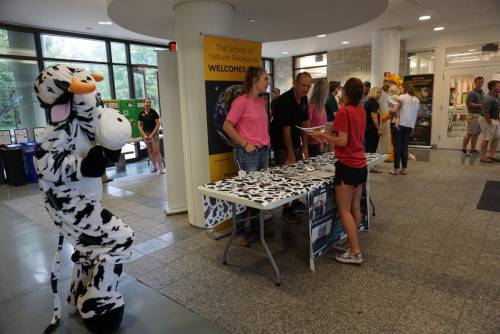 Past Dairy Club president, Haley Linder, acquired the idea while attending the World Dairy Expo in Madison, Wisconsin. The club had been looking for a philanthropic event to introduce to Dairy Club that would have a community-wide impact. They began by selling the T-shirts mainly around the Division of Animal Sciences. The overwhelmingly positive response encouraged the club to take the campaign to the rest of campus.

Dairy Club will be holding this semester’s event on Wednesday, Sept. 26, at Kuhlman Court in conjunction with the Mental Health Carnival. This year, the club hopes to sell out of T-shirts so they have to order more.

Aside from raising money for the Ellis Fischel Mammogram fund, the calves also provide the club with the opportunity to share agriculture with passersby.

“Being transparent with consumers and being that medium between farmers and consumers is where Dairy Club plays a role too,” Tarpey said. “It’s really great because you have so many people in Speakers Circle come up and say they have never seen a calf in real life. It’s nice to share, first, what they are and why they are there, and then, who we are and why we are bringing the calves on campus.”

Bringing calves on campus isn’t the only thing Dairy Club does, either.

The club brings calves to the MU South Farm Showcase, tours farms in Missouri and the Midwest region, and hosts speakers at their meetings. 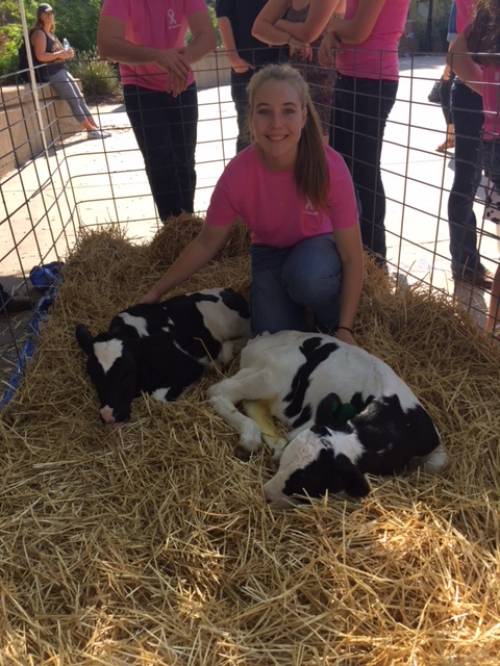 Not all of Dairy Clubs’ members are pre-vet, so the club offers a variety of experiences to provide members with opportunities to find a part of the industry that interests them.

“The experiences I think impact members that way, on helping them find a career that they love,” Tarpey said. “That’s the goal of college, to end up graduating and doing something you love.”

Tarpey said the club consists people with various backgrounds and that students don’t need to have any experience with cattle to become a member.

“I love the people in Dairy Club,” Tarpey said. “Everyone there is either raised on a dairy farm or has no experience, so it’s a total mixture of people. You’re not surrounded by the same person with the same background, and that’s one thing I like about it.”

As far as for their Calves on Campus and the Support Each Udder campaign, Dairy Club plans to continue these efforts in future years.

“Even if it’s just a few people, that makes a difference,” Tarpey said.

The pink “Support Each Udder” T-shirts will be available to purchase at the Calves on Campus event, which will be held on Kuhlman Court Sept. 26. The shirts can also be purchased at the South Farm Showcase Sept. 29. Email Anna Tarpey to learn more about joining Dairy Club or purchasing a T-shirt.